It was at a Hello Day Dance at the University of Utah in 1944 that Thomas S. Monson first saw Frances Beverly Johnson, the young woman who would become his bride.

He determined that he wanted to meet her, but he didn’t see her a second time until a month later at a streetcar stop. He saw her chatting with friends, one of whom was an acquaintance of his from their days at Grant Elementary School in Salt Lake City. This gave him the opportunity to approach them and have his friend introduce him to Frances.

That night, he asked her to a weekend dance put on by the Pioneer Stake.

Coming to her home to pick her up, he garnered the instant approval of her Swedish parents, Franz and Hildur Johnson, when they found out he was related to an LDS missionary they had known in their homeland, Elias Monson.

“Immediately, Frances’s father began to weep as he described the visits his family had enjoyed with Elias and his companions in their home in Sweden,” wrote President Monson’s biographer, Heidi S. Swinton. “He threw his arms around Tom’s neck and embraced him. Then Frances’s mother embraced him. Frances looked at Tom and said, ‘I’ll go get my coat.’”

They courted, attending dances together on most Saturdays.

But it was not until after Tom’s service in the U.S. Navy in 1945–46, his graduation from the university in 1948, and his acceptance that year of a position over classified advertising at the Deseret News that they were married. That occurred in the Salt Lake Temple on October 7, 1948. 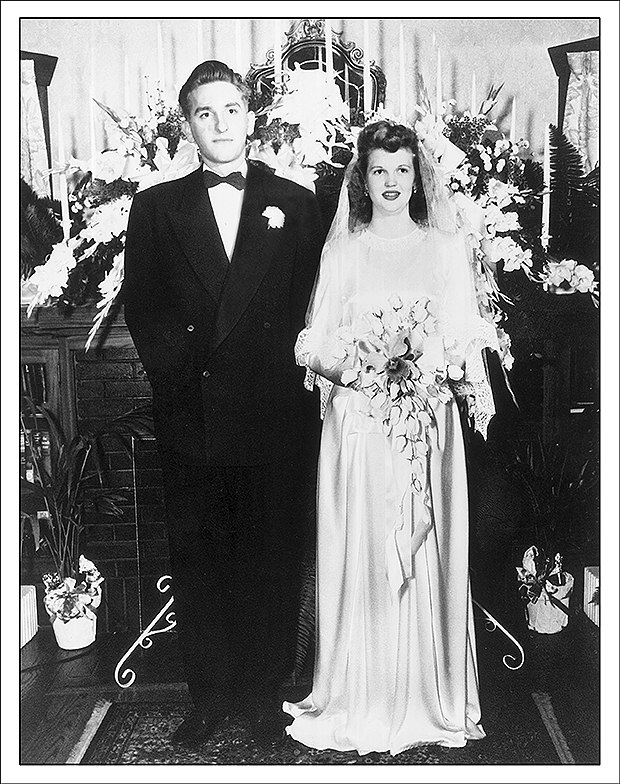 Three children were born to the Monsons.

“Their first child, Thomas Lee Monson, named for his father and for Tom’s mentor, Elder Harold B. Lee, was born on Monday, May 28, 1951,” Swinton wrote in her 2010 biography. “The night before, Frances and many others in the neighborhood had followed a fire engine to a gigantic fire at the Utah Poultry Co. on Fourth South and Third West. The next morning, she delivered her first child.”

It was customary in those days for a mother and a new baby to stay in the hospital for more than a week. This being the case, Tom went ahead with a planned fishing trip to Idaho.

“He says he never heard the end of it,” Swinton wrote. “His story is that Frances encouraged him to go, promising she would ‘just rest’ till he was back. Frances has ‘mentioned’ the expedition and its timing ‘many times.’ He is a ‘serious’ fisherman. But that fishing trip was a ‘serious’ mistake.”

When a daughter was born to the Monsons on June 30, 1954, they named her Ann, a name he had always favored.

“Frances had a difficult delivery and little Ann had a hard start, but both mother and daughter made a full recovery before too long,” the biographer recounted.

Youngest child Clark was born October 1, 1959, while the Monsons were in the midst of missionary service as President Monson presided over the Canadian Mission.

Less than three years after that service, he was called as a member of the Quorum of the Twelve Apostles.

On the occasion of his 90th birthday, children and grandchildren shared fond memories of a prophet of God who found time and occasion to be a warm and loving father and grandfather.

Eldest son Tom recalled: “After my father was assigned supervision of the Church in Western Europe, he began traveling with a much larger suitcase. This was during the Iron Curtain era when Germany was divided by the infamous Berlin Wall. For each trip to Europe, my mother packed a large suitcase with far more of my father’s clothing than he could possibly require. The bag was heavy. Upon returning, it was always much lighter—because it was nearly empty.

“Dad dearly loved and respected the Saints residing in the German Democratic Republic (East Germany). He witnessed their hardships and poverty while living under Communist rule. Because Sunday clothes were extremely difficult for them to come by, Dad always took with him extra suits, dress shirts, and shoes. These he left in the GDR for use by the priesthood brethren.”

Daughter Ann M. Dibb said of her father that fulfilling his priesthood responsibilities has always been essential to him.

“Even though this service required long hours and extensive traveling, our family was blessed. I remember riding in the car as my mother would drop my father off at the airport or she would pick him up. Dad would always return home brimming full of stories. They’d be stories of faith where he would know who needed a special blessing, who needed to be thanked or visited, who the Lord wanted to serve in a specific calling.

“When in town, he was a tireless worker. He’d return home each night with his briefcase filled with letters, reports, manuscripts for Church publications. He would share at the dinner table as to whom he had visited and given blessings to that day. All of these stories and examples blessed our family and strengthened my testimony. I’m grateful my father has always chosen to fulfill his priesthood duty.”

“At that time Dad coincidentally met a BYU faculty member, Dr. Clayton White, whose career was devoted to researching raptors—particularly peregrine falcons. Dad informed Dr. White of my interest, and Dr. White said he would like to meet me.

“On one of the very few Saturdays a year that Dad wasn’t away from home on Church business, he took the time to drive me to Provo from Salt Lake City to meet Dr. White. After an hour-long conversation, Dr. White showed us a live pair of peregrine falcons in an aviary atop the BYU science building.

“This experience initiated a friendship with Dr. White that continues to this day. Today, I am a BYU faculty member in the Department of Geography, where I pursue my interest in raptors, including peregrine falcons.

“I should add that Dad loved raising pigeons—a favored food of hawks and falcons! Despite my love for the mortal enemies of his pigeons, Dad always supported my interest in raptors, and he regularly spent what little personal time he had to help me enjoy my interests.”

Grandchildren of President and Sister Monson also shared warm memories and impressions of their illustrious grandfather.

Sally Monson, daughter of Tom, recalled an elementary school assignment to read a biography and make a doll or puppet of the subject of the biography. She chose to read her grandfather’s biography, On the Lord’s Errand.

Accordingly, she stitched clothes to fit a wooden artist’s mannequin to create a miniature of her grandfather.

“He loved it so much that I gave it to him,” she said. “He called it his ‘little man’ and put it in his office.”

These days, it occupies a prominent place above his television.

“Every once in a while, my grandpa will turn to me when we are sitting in his family room and say, ‘Do you see my little man up there?’ and then chuckle in delight.

“Even though it is just a silly doll I made for an elementary school project, it means the world to me that he has kept it all these years and that it still provides him with genuine enjoyment.”

“I grew up helping him edge his lawn while he drove his riding lawnmower,” he said. “He took me and my siblings on all the rides at Disneyland, and we’ve watched many basketball and football games together. But at the same time, I know he is a prophet of God. At any moment when needed, Tom Monson becomes President Monson. Because of our close relationship, I have had the great blessing to palpably see this metaphorical transformation taking place.”

He told of a fishing trip he took with his grandfather a few years ago. The fishing guide and host requested a blessing for his wife who was undergoing cancer treatments. Mark assisted his grandfather in giving the blessing.

“As we placed our hands on this sweet sister’s head and my grandpa began to pronounce the blessing, Tom Monson became President Monson,” he said. “The words he spoke were not his own. The Spirit enveloped the room in a way I had never felt before. I quite literally opened my eyes during the blessing to look over and make sure it was still Grandpa standing by my side. It was a wonderful testimony to me of the validity of my grandpa’s calling as the prophet of God.”

Alan Dibb told of having been able to see President Monson “in action” many times.

“As grandkids, we have been able to spend quite a bit of time with him. He loved taking us places to have fun or just spend time together.”

Alan has witnessed President Monson cheerfully greet everyone he meets, “from the attendees of a small fireside in Alaska to the people that approach him at the rodeo or while we’re out to breakfast. He cares about everyone. I can say that because I have felt that same care my entire life.”

Paul Monson, son of Clark, remarked: “I’m grateful that my grandpa managed to make time to attend some of my soccer and tennis matches over the years. When I was a very young he even came to one of my swimming lessons. He would also take time to come down to Provo when my sister and I were performing in ward Primary programs. Also, when his health was poor, he still attended my mission farewell. I know it wasn’t easy for him to do, but I will never forget that he was there for me.”

An appreciative posterity is grateful today that a young university student acted on his decision to meet the young woman he saw at the Hello Dance all those years ago. 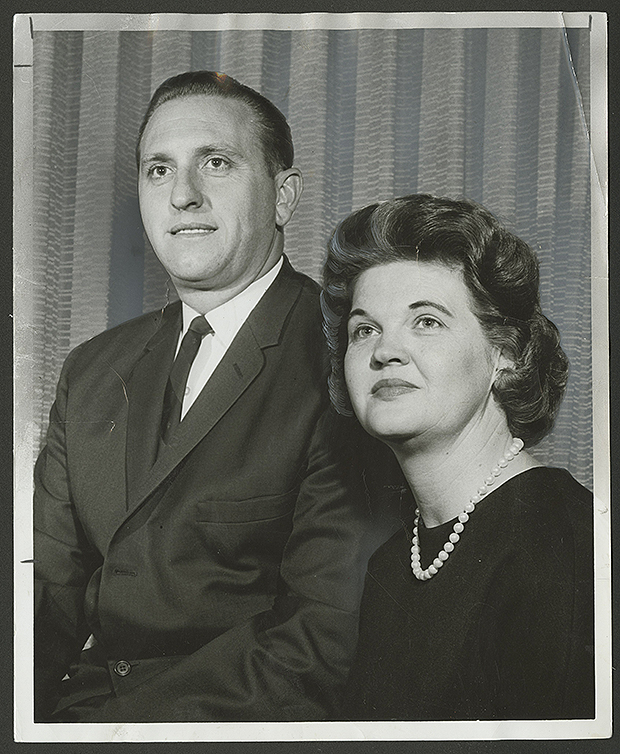 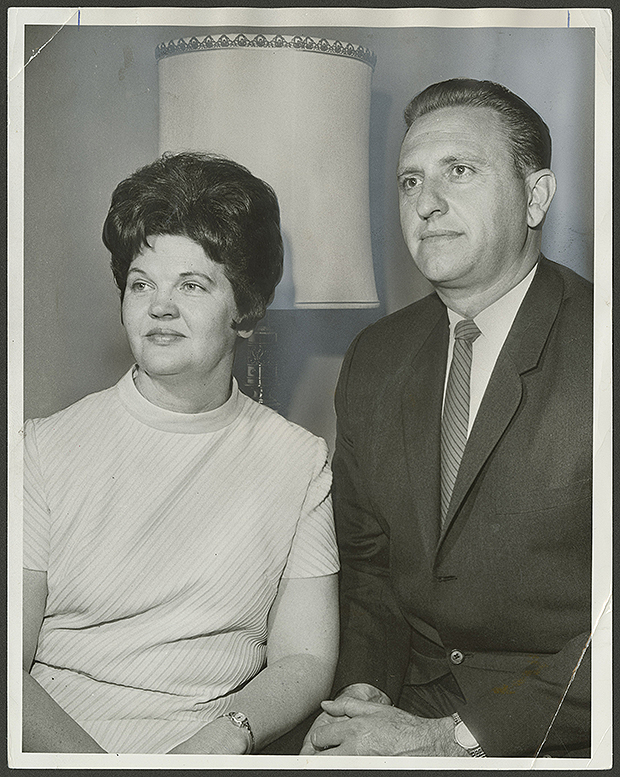 President Thomas S. Monson with his wife, Frances, and their children, from left to right: Clark Monson and Ann Monson. Photo courtesy of Church News Archives. 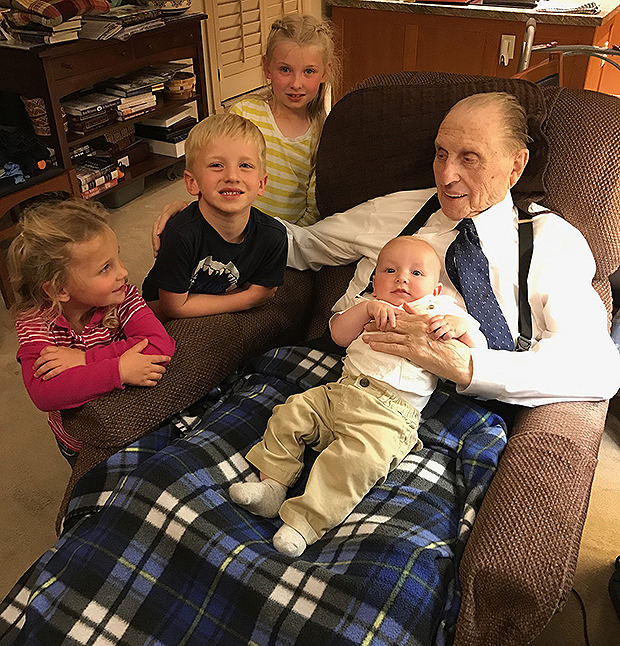