Members of the Albujar family visit Escarly in the hospital. From left to right are Escarly’s dad, Oscar; Escarly; her mother, Martha Lopez; and her sister, Scarlet. Photo courtesy of Albujar family.

Escarly Albujar had only five months left to finish her missionary service in La Paz, Bolivia, when doctors found a football-sized tumor in the middle of her lungs. Her life took a bigger turn for the worse when she heard the news that she would have to leave her mission to return immediately to her home country of Peru for treatment.

“I couldn’t believe it,” said Albujar. “I kept thinking, ‘Why me?’” Despite her diagnosis, she begged her mission president, President Fabian Vallejo, to allow her to continue to serve, thinking she could seek treatment after her mission was completed. Fortunately, he understood the seriousness of her illness. The next day, December 10, 2018, Albujar took the first flight to Lima, Peru, to begin treatment and diagnose the type of cancer she had.

In Lima, Albujar was immediately taken to a specialized clinic. After many tests, doctors determined that she had non-Hodgkin’s lymphoma cancer, and it was spreading rapidly. She was told she would need to start radiotherapy and chemotherapy treatments as soon as possible. Albujar’s mother, Martha López, who is not a member of the Church, left everything behind in her native Chincha, Peru, to travel the three hours to Lima to dedicate all of her time to her daughter’s care.

Church members in the Lima area were notified of Albujar’s situation and did not hesitate to minister the way the Savior would. The Santa Cruz Ward from the Limatambo Stake demonstrated it was not only concerned about Albujar’s improvement but also for the spiritual and temporal care of her entire family.

Bishop Yuichiro Shindo explained that within the ward boundaries are several clinics, so ward members had some knowledge and experience of what families like the Albujars would need. The bishop, elders quorum president, and Relief Society president divided the tasks of medical coordination, housing, food, and most important, the family’s spiritual well-being.

Gregoria Huaz, who had just moved to the area, was assigned as Albujar’s ministering sister. “I immediately went to the clinic to visit ... and I saw her so helpless and young that I felt an immense pain. ... I came home and I knelt down and begged Heavenly Father [to bless] Escarly,” Huaz said. From that moment, she felt inspired how she could best minister to Albujar and to her family.

When Albujar first started chemotherapy, her mother had no place to sleep. She would sleep in the beds of the empty rooms of the clinic until an influx of patients made that impossible. The elders quorum helped pay for a hotel near the clinic so that Martha Albujar could find the rest she needed. The Relief Society sisters fed her breakfast, lunch, and dinner. And because the Albujar family did not know a lot about health insurance, ward members and senior missionaries took turns standing in long lines at the clinics with her. Eventually they helped her transfer to an apartment.

During Christmas and New Year’s, the Albujar family never felt alone. Members decorated a small Christmas tree in Albujar’s room and senior missionaries raised money to give her an iPad so she could read the scriptures, listen to Church music, and be in communication with her family in Chincha.

The young men and young women of ward were also included in ministering opportunities. They invited Albujar’s younger twin siblings to youth activities, picking them up, and dropping them off after activities. Martha Albujar said she was very grateful that her other children were able to get out and be distracted while her daughter was recovering.

Another memorable ministering act was when Cesar Augusto Ontero, who recently returned from the Iquitos mission, traveled with his entire family from Piura (15 hours north of Lima), to visit the Albujars. He also had been diagnosed with cancer while serving as a missionary and was treated in the very same clinic, with miraculous results. His and his family’s visit gave hope and strength to the Albujar family.

During the past 7 months of struggle and fears, the ward has become a second family for the Albujar family. Albujar was comatose for two of the past seven months of treatment, times in which her adopted ward family joined in fasting and prayer for her well-being. Now, whenever people claiming to be a brother or sister from the Church come to Albujar’s apartment door, her mother lets them enter, knowing they come to visit and pray for her daughter.

Even with all the ministering that Santa Cruz Ward has provided, “We are not finished,” said Bishop Shindo. “There is even more commitment to ministering in the ward.” A great spirit of service has flooded the ward, he said, especially those who have been involved with Albujar’s care. They have felt the Savior’s love through ministering, an experience that has inspired them to continue serving.

Although Albujar did not initially understand why she had to go through this trial, she feels the Lord never abandoned her. “I know that He lives and that He will always be there for me,” she said. “Because of this trial, I have grown stronger and learned. I am so thankful that the Lord has given me another opportunity.”

She knows that it doesn’t matter how long we live, but rather, the good acts we’ve done in our time on earth. “I don’t know if I will live a little or a long time,” she said, “but all I ask [God] is [that I] not lose hope or faith. ... I yearn to live, marry, and have a family, but whatever His will is, I accept it. I have learned to enjoy, smile, and live the best I can every day, as if it were my last.”

Albujar is currently waiting for her last positron emission tomography (PET) scan, hoping she will be declared cancer-free.

Albujar said she has also seen the difference with her mother, who now reads The Book of Mormon, prays constantly, and attends church with her whenever possible. As for herself, she said she has set goals to learn English and study the Come, Follow Me manual with her mother. 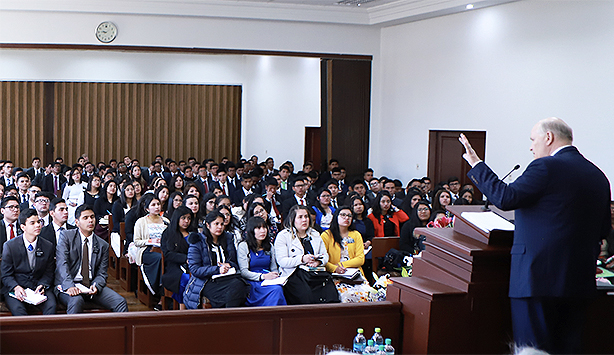 Sister Escarly Albujar (sitting on the front row in a blue dress) attends a missionary meeting with Elder Dale G. Renlund of the Quorum of the Twelve Apostles while she was serving a mission in La Paz, Bolivia. 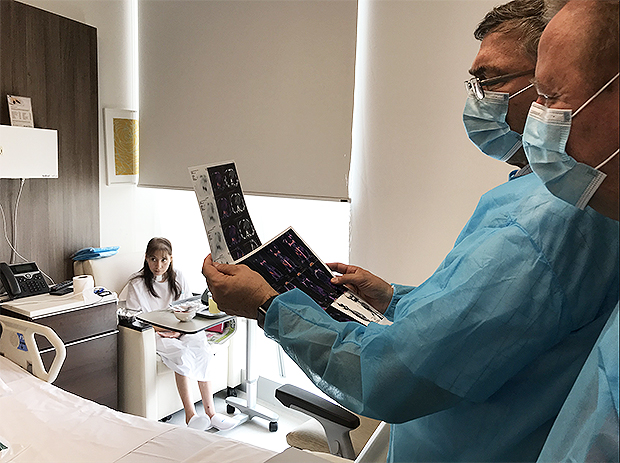 Doctors in Lima, Peru, review medical scans while Escarly Albujar rests in the back of the room. Photo courtesy of Albujar family.