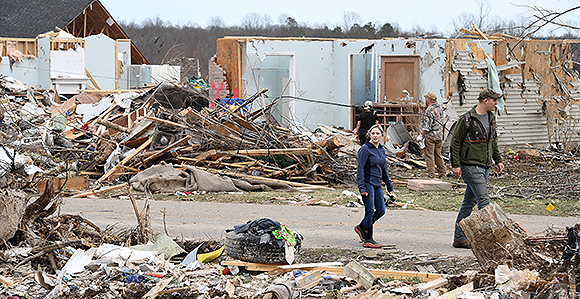 All Latter-day Saint missionaries serving across the U.S. Southeast are safe and accounted for following two days of widespread tornadoes and violent storms that have claimed more than 30 lives.

While damage assessments continue across the vast area hit hard by the weather, there were no early reports of damage to Church-owned buildings or properties, according to Church spokesman Doug Andersen.

At least one member-owned home was reportedly impacted.

The storms battered regions of the South already on edge because of the coronavirus pandemic.

More than 30 people have been killed, and more than 1 million homes and businesses were left without power amid floods and mudslides, the Associated Press reported.

Mississippi governor Tate Reeves said the storms were “as bad or worse than anything we’ve seen in a decade.”

Meanwhile, Georgia governor Brian Kemp said some storm victims were already out of work because of shutdowns caused by COVID-19, the Associated Press reported.

“Now they have lost literally everything they own,” he said.

Widespread electrical outages caused by the storms were reported from Texas to Maine.