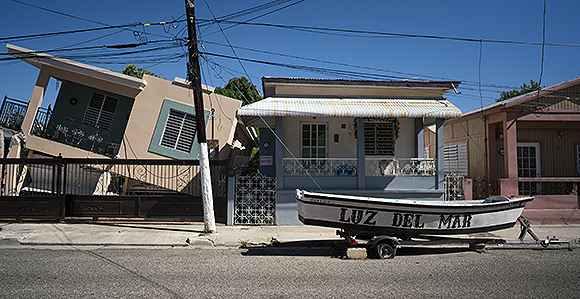 Latter-day Saints and their neighbors across Puerto Rico were rattled awake Tuesday morning, January 7, when a 6.4-magnitude earthquake struck the Caribbean island that remains haunted by recent natural disasters.

All missionaries serving in Puerto Rico are safe and accounted for and were in contact with their families Tuesday via phone texts. Meanwhile, there were no early reports of injuries to Church members.

One man from the southern city of Ponce, where Tuesday’s earthquake was strongest, was killed, and several others were injured. Hundreds of people have flocked to the streets in Ponce, too frightened to return to their homes after the main quake and subsequent aftershocks, the Associated Press reported.

Electrical outages were common across the island Tuesday morning because of downed power lines and voluntary shutdowns to allow for maintenance and inspection of potentially compromised infrastructure.

Ponce Puerto Rico Stake president Franki Ruiz said violent tremors jostled him from bed Tuesday shortly after 4:00 a.m. He was expecting a major quake, because of frequent seismic activity on the island in recent days.

“I woke up and told my wife and parents and kids that this was the [big] one, so let’s get out of the house,” he said. “We walked calmly outside, and all my neighbors were also leaving their homes.”

“We have no reports of members being harmed or reports of their homes being seriously damaged,” he said. “We are still trying to account for everyone—but so far things seem to be OK for the members.”

Tuesday’s main quake and frequent aftershocks have left some in the Ponce region hysterical with fright, said President Ruiz.

“People are parking on the main roads and freeways and just waiting. We are still in an emergency situation at this point.”

Meanwhile, local leaders in the Ponce stake made preliminary structural assessments of local Church buildings and did not discover any obvious damage.

Puerto Rico San Juan Mission president David Smart told the Church News a short time after Tuesday’s quake that the elders and sisters serving on the island were accounted for and in good condition and spirits.

“All of the missionaries were able to get smartphones just before Christmas, so we are all connected now,” he said. “Around 4:30 or 5:00 a.m. this morning, we started receiving messages from the missionaries saying that they felt the quake but that there were no injuries or problems.”

All the missionaries, he added, have texted their parents, letting them know they were safe.

There is, perhaps, no mission in the Church more savvy in dealing with natural disasters lately than the San Juan Puerto Rico Mission. Following Hurricane Maria in 2017, full-time missionaries were evacuated to ensure their well-being.

“Since the hurricane, we’ve maintained 72-hour kits and a supply of water in all the missionary apartments,” said President Smart.

In the capital of San Juan, on the north end of the island, residents and members were dealing Tuesday morning with widespread power outages—but were grateful that the quake did not cause greater damage.

He and other stake presidents on the island were in communication with one another shortly after the main quake.

Despite being more than an hour’s drive from Ponce, “we felt the earthquake very strongly here in San Juan.”

President Rosa said Puerto Rico is a seismic region and he and his fellow islanders are accustomed to occasional temblors. Most of the newer buildings are designed to withstand quakes.

Still, he added, many across Puerto Rico live in older or less stable homes or apartments that remain vulnerable to natural disasters.