Mexico City Is a Growing Area of Strength for the Church, Says Elder Cook 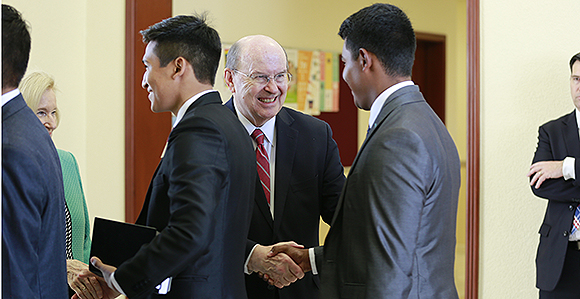 Mexico is great center of strength for The Church of Jesus Christ of Latter-day Saints, said Elder Quentin L. Cook after returning from 10 days in the North American nation on February 17.

A country of 110 million people, Mexico is home to 1.4 million Church members, 220 stakes, 32 missions, 13 temples, strong leaders, and multigenerational families, said Elder Cook of the Quorum of the Twelve Apostles.

“People smiled. They were happy. There seemed to be a genuine delight in being members of the Church,” he said.

Elder Cook praised the work of the Area Presidency and their wives. “They do an excellent job,” he said. “They are really making a difference.”

Elder Valenzuela said Elder Cook devoted his time during the assignment to ministering to “Church leaders, members, missionaries, and some other very important persons in the religious, government, and business environment.” He taught them doctrine and principles to remember as they deal with life challenges and seek opportunities to serve others in the kingdom, he said.

“One of the highlights for me was watching members greet Elder Cook and receive a spiritual witness of his divine calling as an Apostle of the Lord Jesus Christ,” said Elder Pingree. “For many, it was their first time meeting an Apostle, and the members’ love of the Lord and appreciation for modern-day prophets was evident.

”Elder Cook teaches by encouraging and uplifting others. He is very practical in his approach to teaching the gospel and helped priesthood and auxiliary leaders with functional ways to implement the various changes that have been announced by the Church over the last few years. Leaders and members left the training meetings with added vision, hope, and energy.“ 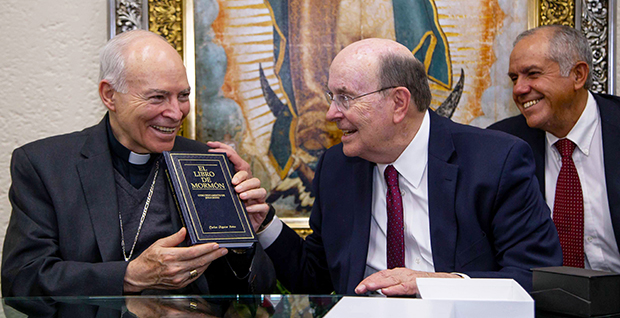 During the trip the leaders participated in a historic religious freedom forum held on February 15 in the auditorium of the Mexican Senate—a unique venue given the strict interpretation of separation of church and state by Mexican law.

During his remarks at the Inter-American Forum of Collaboration and Interfaith Dialogue on Religious Freedom, Elder Cook said, “There are a growing number of people who do not feel accountable to God for their conduct and attempt to diminish the rights of those who do feel accountable.”

During the talk, which was translated into Spanish and was broadcast on networks that cover the Mexican Senate, Elder Cook called for people of faith to stand firm and united in defending religious freedom.

“My principal message is that we must not neglect our responsibility to defend religious freedom,” he said.

Joining Elder Cook on the program were Archbishop Rogelio Cabrera López, the archbishop of Monterrey and president of the Mexican Conference of Catholic Bishops; Diana Álvarez Maury, the Undersecretary for Religious Affairs for the government of Mexico; Senator Kenia López Rabadán, chair of the Mexico Senate’s Human Rights Committee; and Senator Óscar Eduardo Ramírez Aguilar, chair of the Constitutional Matters Commission in Mexico. 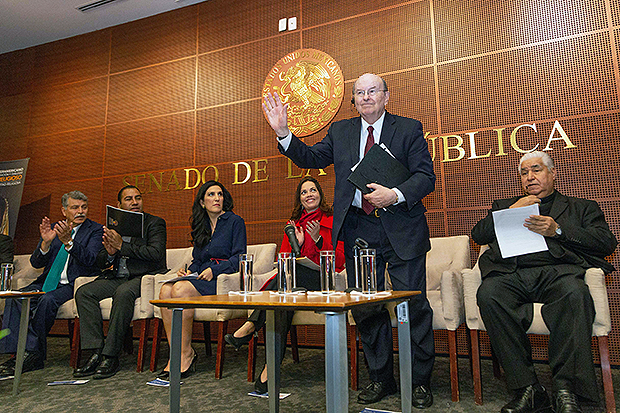 Elder Quentin L. Cook waves to the audience during the Inter-American Forum of Collaboration and Interfaith Dialogue on Religious Freedom, held in the Mexican Senate in Mexico City on February 15, 2019.

Elder Cook said he was pleased to be gathered among people of faith and goodwill “in a country and in a region of the world where the great majority of the population values faith, family, and the ethical values that religion inspires and teaches.”

“The participants and the audience were very appreciative,” said Gary Doxey, associate director for the International Center for Law and Religion Studies and former president of the Mexico City South Mission. “Several commented that freedom of religion and conscience is important in a religiously diverse society.”

He said Elder Cook’s remarks were received well. Many commented about his directive to stand up when religious intolerance occurs.

During a devotional attended by 800 youth from eight stakes in Mexico City and broadcast to 38,000 youth throughout Mexico on February 10, Elder Cook spoke of the importance of obtaining a testimony and encouraged the youth to be worthy of a temple recommend.

The leaders and their wives answered questions from the youth, with the event hosted by two youth from two Mexico City stakes—Karim Noffal Cabanillas, a priest in the Tacubaya stake, and Pahoran Parra Cruz, a Laurel from the Chapultepec stake.

During the devotional, the leaders reminded the youth of their potential to become a light and invited them to have faith, to serve and love others, and to be tolerant and courageous. Elder Cook encouraged them to always seek the guidance of the Spirit to make the important decisions.

Shortly before the end of the devotional, Elder Cook pronounced a special blessing for the young people of Mexico. He said, “I invoke a blessing on you to be the most faithful generation of members of the Church that this country has had.” 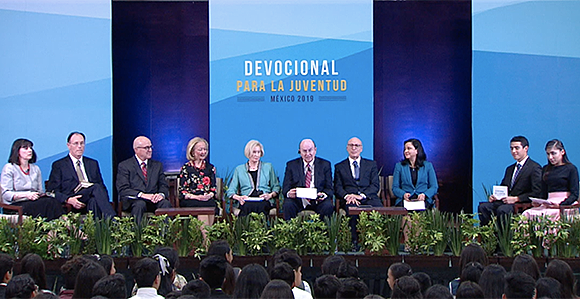 Elder Quentin L. Cook and other Church leaders participate in a youth devotional in Mexico City on February 8, 2019.

In addition to the youth devotional, the leaders participated in two devotionals for young married couples—one in Mexico City and one in Mérida. The couples, who had been married up to five years, “looked really good and were excited to meet with leaders and receive counsel,” said Elder Cook.

Looking over the congregations left Elder Cook with an “overwhelming feeling of gratitude.”

Amid a world of shifting values, “they are moving forward in faith.”

“I saw great hope for the promise of the Church in Mexico with these young, vibrant couples,” said Elder Clayton.

Even attending a meeting of that kind in Mexico—where traffic is heavy—is a “remarkable testimony of how they feel about the gospel.”

Elder Cook, Elder Clayton, and Bishop Waddell addressed missionaries at the Mexico MTC as well as in Mexico City and in Mérida.

During a missionary meeting with 155 missionaries from the Mexico Mérida Mission on February 15, Elder Cook made reference to the First Presidency announcement a day earlier updating the guidelines regarding communication between full-time missionaries and their families. But the missionaries had not yet learned that—effective immediately—they could communicate with their families each week on preparation day by text messages, online messaging, phone calls, and video chats in addition to letters and emails.

“It was like Christmas morning,” said Elder Cook. “There was real joy.”

The missionaries in Mexico were very impressive, said Elder Cook.

Added Elder Clayton: “They were sharp. They were happy.” 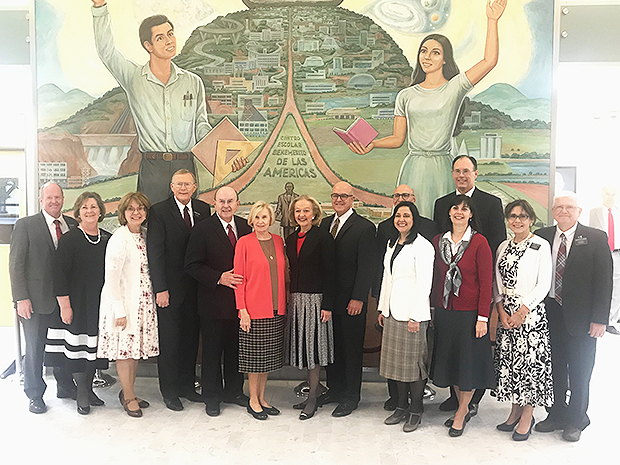 Elder Quentin L. Cook of the Quorum of the Twelve Apostles gathers with other Church leaders at the Church’s Mexico Missionary Training Center. The mural in the background is from Benemerito de las Americas, formerly the Church’s high school that was converted to the MTC in 2013. 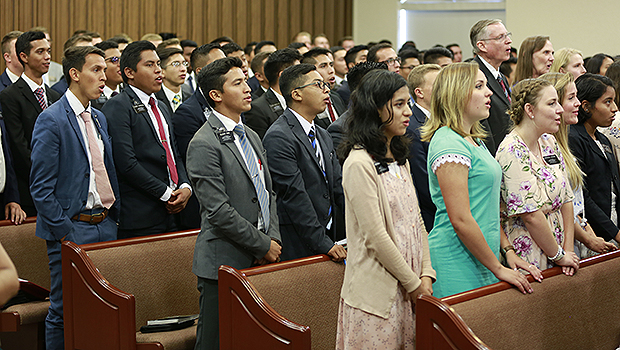