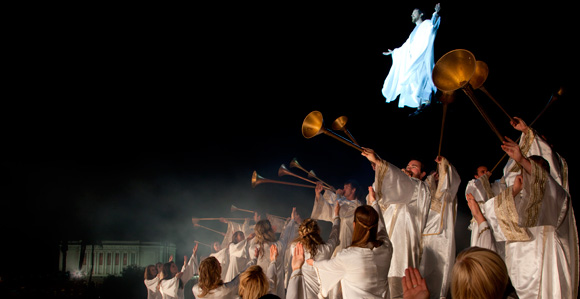 “We want so much to bring to the heart of every person sitting in the audience [the message that] there is peace, there is hope, because Jesus lives and He loves them.”

It was during the scene where Jesus Christ falls to His knees in the Garden of Gethsemane that Tyler Maxson, who portrays the Savior in this year’s Mesa Arizona Easter Pageant, gained an insight into the Savior’s life.

“I suddenly had the sense that I should not be there, that we were on hallowed ground, even though we were just rehearsing,” he said.

The Mesa Arizona Easter Pageant is one of the largest outdoor Easter pageants in the world. Each year it draws more than 100,000 people, who watch the story of Christ’s life, mission, and Resurrection unfold through speech, music, dance, and drama, played out on a 9,600-square-foot (890 square meter) stage that towers four stories.

For the thousands in attendance each night as well as the nearly 1,000 cast and crew who perform Jesus the Christ multiple times in the weeks leading up to Easter, the pageant is an experience that brings them closer to the Savior.

Nanci Wudel, who has directed the pageant for nine years, said she has yet to see someone attend the production without being uplifted by the message.

“I know that the people who come to our pageant leave with a peace and a hope in their heart that maybe wasn’t there when they came,” she said. “We want so much to bring to the heart of every person sitting in the audience [the message that] there is peace, there is hope, because Jesus lives and He loves them.”

The text of the pageant is taken directly from the King James Version of the Bible and is written and presented for all religions, cultures, and ages.

“This isn’t a Mormon pageant,” Sister Wudel said. “It’s a Christian pageant about Jesus Christ. … We’re not trying to proselyte as much as give them a gift of knowledge, and then the Holy Ghost takes it from there.” 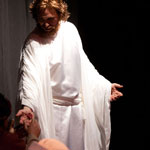 The cast includes nearly 500 people set apart by local priesthood leaders as missionaries for one month. The cast is asked to study the scriptures more and live their lives with greater devotion to the gospel.

Pageant president Don Evans believes this brings an added measure of the Spirit to the production.

“The pageant is a reminder of the life of Christ, and one cannot sit through the performance without feeling that,” he said. “It reminds me of some of those things about Christ’s life that I don’t think about as often as I should.”

Keith and Elaine Burgess are pageant actors and devout Christians who say they have felt the Spirit as they’ve helped portray the life of Christ.

Mrs. Burgess agreed. “I didn’t know that it was going to be quite as moving as it was. Somehow when you’re involved in it and you’re in the cast, it feels very real. It actually feels like you are there,” she said.

Kayla Partridge is a member of the Church and was an angel in this year’s pageant. Her family also participated in the production. “My experience with the Easter pageant has really helped me gain a personal testimony of the Savior,” she said. “I’ve been able to . . . really come to know [the Savior] as a person.”

Tyler Maxson was cast as Jesus Christ in this year’s pageant. He said taking on the role of the Savior gave him a greater understanding of who the Lord is and what He experienced.

“I’ve had to think of things like how did He walk [or] raise His hands,” Brother Maxson said. “Having gone through that process of just thinking about those minute details has really brought a sense of closeness.”

Cast members weren’t the only ones to notice the pageant’s edifying effect. Those who work behind the scenes and those who attend the pageant also appreciate its influence.

“Every Easter, people gather here at the Mesa Temple grounds to see a play about Jesus Christ,” he said. “And anytime we gather with intentions to get closer to Christ, the Spirit is there. It’s a really unifying thing for the community.”

Jerome Norman comes from a nondenominational Christian background and attended the first night of performances. “It’s always touching to remember what Christ had to go through because of our own sins,” he said.

Dan Goodman first saw the pageant decades ago, when it was a sunrise choir service on a wagon. After attending the pageant this year, he said, “It was very touching and sobering, and it gives us a lot to live up to. But it also gives us some hope for the future and a chance to repent and follow what we’ve been taught,” he said.

During the last minutes of the pageant, hundreds of voices unite to exclaim in song, “He lives!” Men, women, children, and “angels” in the cast raise their voices and their arms to the character of Christ ascending into the air before the stage goes dark.

In the moments before the applause begins, a reverent silence reigns over the thousands in the crowd, giving them a chance to ponder the message of the play.

“I’m so grateful that I get to bear that testimony every night when we share the pageant,” Brother Maxson said. “I cannot deny the spirit that we feel when we all bear testimony together that we know He lives.”

The remaining performances are April 22–23 in English. All performances begin at 8 p.m. on the north lawn of the Mesa Arizona Temple Visitors’ Center, located at 525 E. Main St., Mesa, Arizona, USA.

Free tours of the Mesa Arizona Temple Visitors’ Center are offered before and after the pageant.

More information about this year’s pageant is available here (PDF).

Admission is free. No ticket is required, and no reservation is necessary.

For more information on the Mesa Pageant, see  www.easterpageant.org.