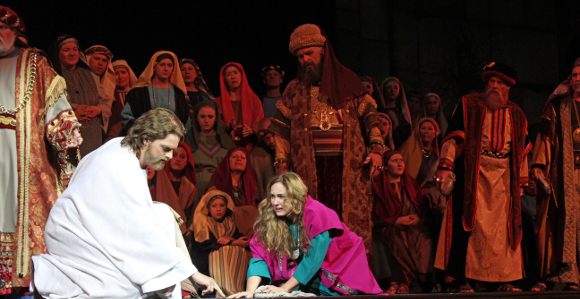 An actor portraying Jesus writes on the ground as the woman taken in adultery is brought before Him. He says, “He that is without sin among you, let him first cast a stone at her.” He then tells her to “go, and sin no more.”

“Even though we are imperfect and often fall short, the Lord always fills in the gap, always makes up the difference.” —Jenee Wright Prince, pageant director

While the faces in the cast and audience may change over the years, the glorious, inspiring story is the same.

The 65-minute, outdoor Mesa Easter Pageant, Jesus the Christ, is presented on the north lawn of the Mesa Arizona Temple. Using music, dance, drama, and costumed actors on a massive stage, the pageant portrays the story of Christ as recorded in the Holy Bible.

“We have the task of portraying the life of the Savior in a way so that hundreds of thousands of people can feel the Spirit in the beautiful Easter message,” said pageant director Jenee Wright Prince. “As a cast, we are there to present the story of the Savior. Even though we are imperfect and often fall short, the Lord always fills in the gap, always makes up the difference.”

Pageant officials enlist the help of nearly 500 volunteer actors and another 400 volunteers who work behind the scenes in various areas in what over the decades has become a beloved annual community tradition.

“The amount of people it takes to put on the production is amazing,” said Sister Prince, who is in her fifth year as director, having served seven years prior as an assistant director. “They’re all there just to serve; they’re there because they love the Savior.”

Shannon Jones of the Mesa Arizona Alta Mesa Stake said her role as the adulterous woman in a scene where she is brought before the Savior is an emotional one.

“It’s very personal, very emotional for me,” she said of the part she has played for four years. “I’m grateful to have that experience each night.”

The pageant, at 525 East Main Street in downtown Mesa, runs nightly at 8:00 p.m. through March 26. A Spanish version was performed March 19. Several performances include ASL interpreting.

Scott Johnson of the Paradise Valley Stake portrays a Sadducee for the first time this year.

“It’s an absolutely marvelous experience,” he said. “I get to watch miracles happen all the time.”

He said there is a great feeling of unity among cast members on stage and in “family” groups backstage.

“We are all here in a common cause,” he said. “It strengthens my testimony. I love my Savior and I know He lives!”

Mike Smith of the Gilbert Arizona Highland West Stake portrays Caiaphas, the Jewish high priest who is believed to have organized the plot to kill Jesus. It’s a vastly different role from when he portrayed Jesus for 10 years starting in 1984.

He said his young children grew up in the pageant and after a long break he again auditioned for the cast, this year joining his daughter and two teenage granddaughters.

“What better place to be than on the temple grounds every year and participating in telling His story?” he asked.

He said it’s humbling to see volunteers spend countless hours to put on the pageant.

“There are so many behind the scenes,” he said. “[The cast members] go out for four weeks onstage, but some of these people deal with it all year.”

Sister Prince said she recently acquired a box of pageant memorabilia from the early 1970s from her grandmother who passed away.

“It’s amazing to see how far it’s come,” she said.

Steve Harms, pageant publicity director, said that if the weather is good, he expects more than 100,000 audience members for the performances during the two weeks before Easter.

For the first time this year, with a recent expansion the Valley Metro Light Rail along Main Street, mass transportation is now provided from west Mesa, Tempe, and Phoenix to a station that is just a short distance in front of the temple.

“It’s easier to get there from Phoenix,” Sister Prince said. “We call it the ‘Temple Stop.’”

For more information on the pageant, visit www.easterpageant.org.

In a beginning scene of the Mesa Easter Pageant, a centurion asks disciples about who Jesus is. Photo by Scott P. Adair. 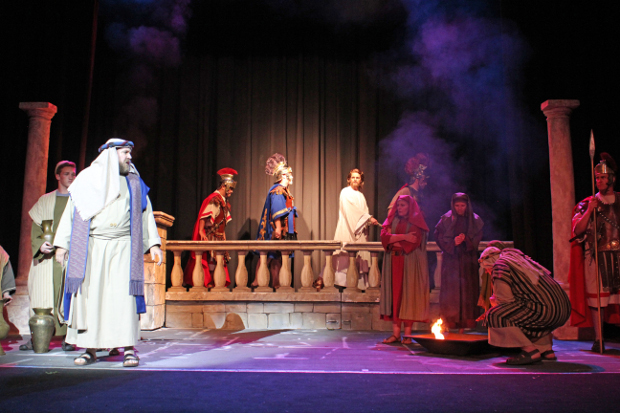 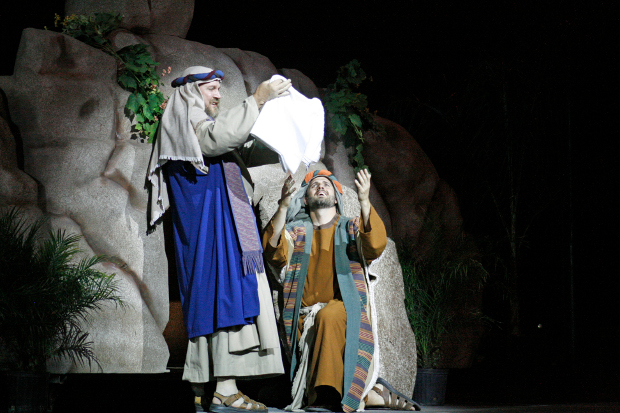 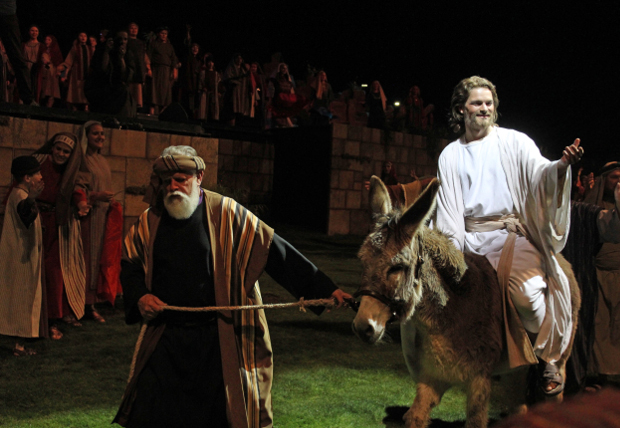 An actor portrays Jesus riding into Jerusalem on a donkey in the Triumphal Entry scene. Photo by Scott P. Adair. 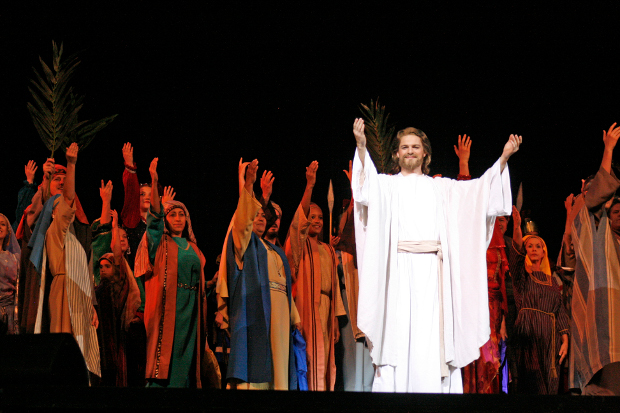 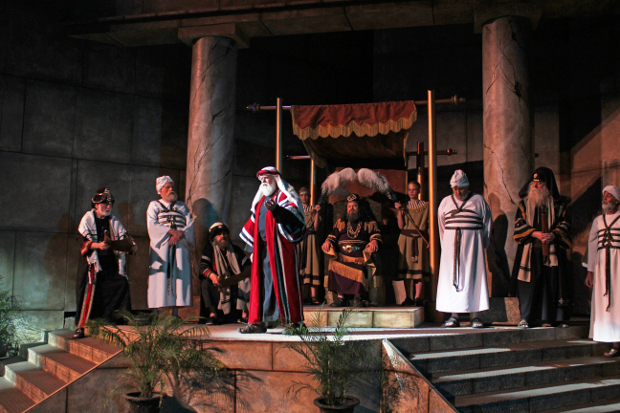 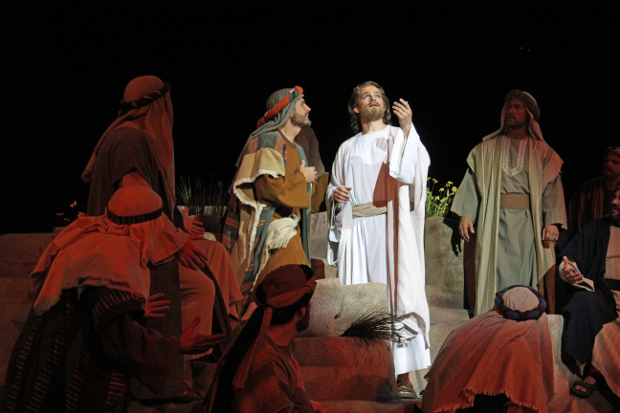 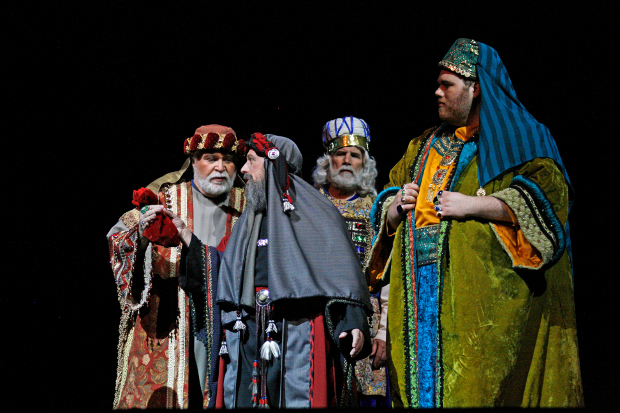 Jesus meets with His Apostles in the Last Supper scene. Photo by Scott P. Adair. 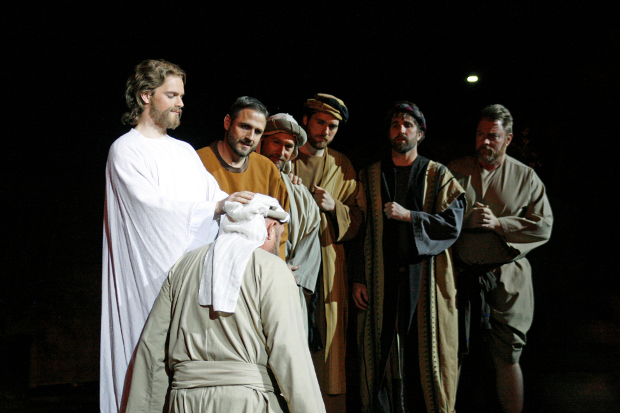 Jesus ordains His Apostles in a scene in the pageant. Photo by Scott P. Adair. 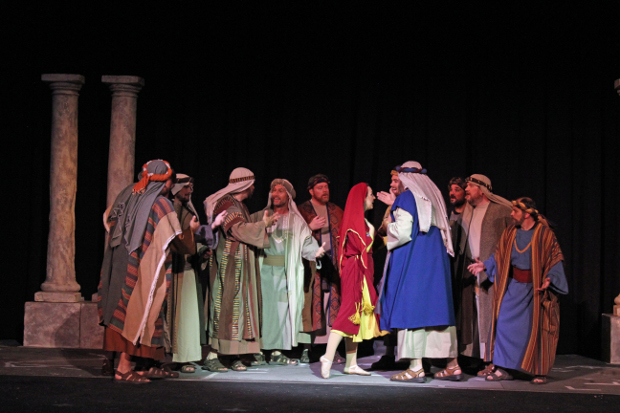 Mary tells the Apostles that she has seen the risen Lord. Photo by Scott P. Adair. 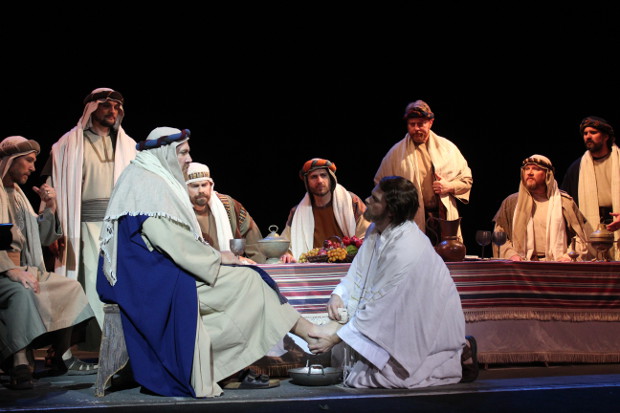 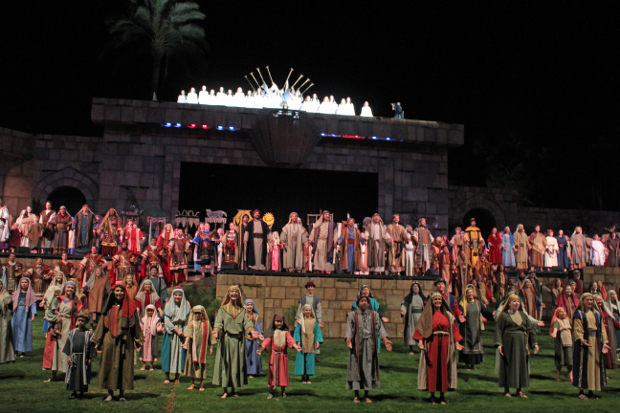 The entire cast of the Mesa Arizona Easter Pageant takes part in the finale. Photo by Scott P. Adair.