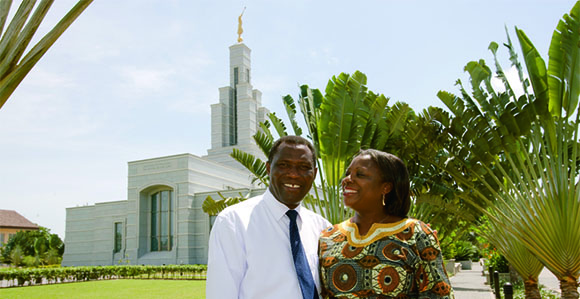 An African couple on the grounds of the Accra Ghana Temple.

“May our Heavenly Father bless us that we may have the spirit of temple worship, that we may be obedient to His commandments, and that we may follow carefully the steps of our Lord and Savior, Jesus Christ.” —President Thomas S. Monson

For decades, the Church News has dispatched its reporters to all corners of the earth to cover the dedications of new and rededicated temples.

It’s not cheap to staff dedicatory events happening thousands of miles away from the publication’s Salt Lake City newsroom. But for our writers—and hopefully for our readers—it is money well spent.

Each temple trip allows our reporters to witness firsthand the value of the Lord’s most sacred edifices in the lives of Latter-day Saints from Guatemala to Ghana—and in scores of countries in between.

Indeed, the past four decades have been defined by the Church’s prolific temple building. In 1975 there were 16 temples in operation. Today, 40 years later, members across the globe worship in 148 temples. The 149th will open in a few weeks following the dedication of the Tijuana Mexico Temple.

Temples now dot the planet in ever-growing numbers. But the dedication or rededication of a temple will never become commonplace. Each new temple remains cause for celebration. Each new temple marks a path to salvation for the tens of thousands of people living in the new temple district.

The accounts of members making staggering sacrifices to worship in the temple have become staples of the Church News and other Church publications. Here are a few examples:

In an interview with the Church-owned Liahona magazine, Elder Adhemar Damiani of the Seventy (1939–2013) spoke of sacrifice and the temple. For many years, he worked in the Sao Paulo Brazil Temple, where he witnessed many families arriving to be sealed.

“I remember one family who had traveled for three days to get to the temple,” he said. The father was embarrassed that only two of his six children had shoes to wear; four had only sandals. “He knew that coming to the temple was more important than having shoes. It was a wonderful experience to see this beautiful family sealed together in the temple.”

Then Elder Damiani offered this counsel:

“You [too] can make a difference by making sacrifices. You can give up some of your free time to help others. You can work hard to do well in school and reach your goals. You can pay tithing to help temples be built and pay a fast offering to help poor people have food to eat.”

President Thomas S. Monson has played an essential, shepherding role over the past two decades of temple building. Since 2000 alone, he has presided over 20 temple dedications.

In general conference last April, the Church President called the blessings of the temple “priceless.”

“One for which I am grateful every day of my life is that which my beloved wife, Frances, and I received as we knelt at a sacred altar and made covenants binding us together for all eternity. There is no blessing more precious to me than the peace and comfort I receive from the knowledge I have that she and I will be together again.

“May our Heavenly Father bless us that we may have the spirit of temple worship, that we may be obedient to His commandments, and that we may follow carefully the steps of our Lord and Savior, Jesus Christ.”