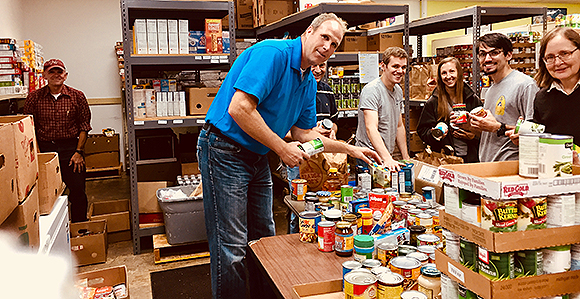 A food pantry in Wisconsin briefly experienced too much of a good thing when an unexpected and large donation temporarily overwhelmed the pantry’s small staff of volunteers.

The 4,159-pound donation came from a food drive held at River Falls High School from generous high school students and their families.

“I called some friends, and people were so willing to help out,” said Pamela Ballard, who serves as board president of the River Falls Community Food Pantry.

By friends, Ballard means members of the Hudson Ward, Oakdale Wisconsin Stake, who took the time between sessions of general conference on Saturday, September 30, to help sort and organize the donated food. Their service meant the pantry could soon be up and running again.

“I’d like to thank the Mormons for coming in and giving their time on a Saturday when it is hard to find volunteers,” said Candice Anderson, executive director of the pantry. “Their sorting through the donation was a tremendous help.”

“It was nice to have the opportunity to join with friends and serve locally,” said John Squire, second counselor in the Oakdale Wisconsin Stake, who came to help out, “especially since the topic of service had just been addressed in conference.”