Members’ Civic Engagement Impacts Communities and Others for Good 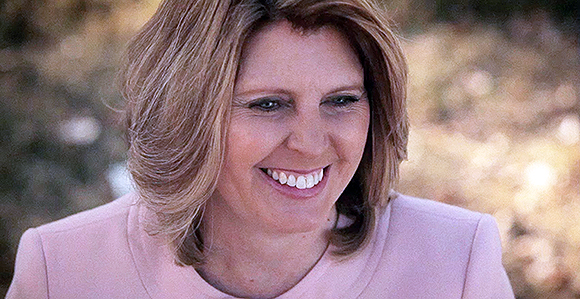 Shari Buck in a promotional campaign video. Buck has been involved in her community and politics for over 10 years, ever since receiving a reply to a letter she wrote Elder Holland. Image is screenshot taken from video by City of North Las Vegas.

“You can be a voice of balance and reason, advocating fairness in all corners of society.” —Elder Patrick Kearon of the Presidency of the Seventy

It all started with a letter from Elder Jeffrey R. Holland.

After becoming frustrated with the state of the world, Shari Buck wanted answers. She had been raised in a household where “public service was just what we did.” A father who had been the chief of police and a mother who worked in the chamber of commerce had made Buck hyper-aware of what was going on around her.

Elder Holland had been the president of BYU while she was attending school there. She decided to write him a letter inquiring why the Church wasn’t more open about political and social issues.

The answer she got changed everything.

“He was kind enough to write back and say, ‘We’ve got to step up as individuals. We can’t think it needs to be someone else. It’s up to us.’”

This sparked something in Buck. She and her husband looked around their community and saw a need for a new recreation center. They went to a parks and recreation meeting to express their interesting in helping out. Buck was appointed to the parks and recreation board, and everything started from there.

Since then, Buck has served on the North Las Vegas city council and as the mayor of the city. Today, she works with U.S. Sen. John Hoeven of North Dakota. Her work has allowed her many opportunities to share her testimony and beliefs, even if it’s not always in the most obvious way.

Once, while mayor of North Las Vegas, she traveled to Ireland where she was interviewed on a local radio station. After putting in a plug for tourists to come visit the city, saying there was much more to it than just gambling, she was asked why she herself didn’t gamble.

“I said it was because of my religion,” Buck remembered. “I’m a member of the Church, and I was able to kind of get that message out, which was great.”

The Church has maintained its stance on political neutrality. According to a statement released in October 2016, the Church does “encourage its members to play a role as responsible citizens in their communities, including becoming informed about issues and voting in elections.“

There is also an expectation for members to “engage in the political process in an informed and civil manner, respecting the fact that members of the Church come from a variety of backgrounds and experiences and may have differences of opinion in partisan political matters.”

“He really brought life to the subject,” Gruwell said. “I found that I loved learning about important issues of the day.”

Gruwell became particularly active during the 2016 presidential election. After seeing the large divide between and within the two major political parties, he “realized a seismic shift had happened in American politics” and felt ”politically homeless.”

He did his research and eventually a candidate came along that Gruwell did feel confident about and campaigned for.

Buck said being engaged in the community is about more than just making changes in your area.

“It’s really a matter of getting outside of ourselves and outside of our own group of friends that we normally associate with,” she explained. “We have so many talented and great role models and examples. Sometimes I think we, as a people, stick to ourselves too much.”

Gruwell also believes each person has more influence than they believe.

“Think of all the people who have ever taken your advice, asked for your help, or ever generally admired you,” he said. “These are all people who may be influenced by gentle reasoning or a positive example.”

From her experience, Buck understands why some members may be cautious against speaking out. She remembers being so shy that “there were times when my voice would just shake,” sometimes so badly that she’d retreat to a back room and cry because of the nerves.

Buck encourages those looking to become involved to educate themselves about what is going on in their communities and to find something they can be involved with. After all, that’s how it started for her.

In a worldwide devotional for young adults on May 6, 2018, Elder Patrick Kearon, a member of the Presidency of the Seventy, said there is a growing need for members to become engaged in public service.

“Join other politicians who are finding common cause to bring healing to troubled lives in their own jurisdiction and beyond,” he said. “You can be a voice of balance and reason, advocating fairness in all corners of society.”

Elder Kearon warned against becoming involved in “political tribalism which has become so polarized, strident, and destructive across communities, countries, and continents” (“A Hallmark of the Lord’s True and Living Church”).

Gruwell agrees and suggests watching and reading as many news outlets as possible. Follow municipal social media accounts to learn about town hall and council meetings, he said.

“More than anything, don’t be afraid to talk about important issues with friends and family in person and on social media,” Gruwell said. “For every one person who disagrees with you, there are five more who are happy to learn more about the subject from someone they trust as long as they know you treat the issue fair and objectively.”

Don’t be afraid of being involved in local communities, Buck said. She called it a “life-changing” experience that is completely worth it.

“We need to overcome our trepidation or our apathy and understand that forces are defining our world,” Buck said. “Are we going to be part of a good force? … We need to.”