“I think the Spirit of the Lord is moving upon this generation in a way that we’ve never before seen happen as a result of a specific statement or announcement made by the President of the Church, at least not in my lifetime.” —Elder David F. Evans of the Seventy

A single word on a mission-call acceptance form received recently at Church headquarters was eloquent in its brevity. In the space for the response was the word “YES!!!” in large, colorful, hand-drawn letters.

In that one word, the signed form reflected the joy, eagerness, and gratitude that young Latter-day Saints have shown since President Thomas S. Monson made his momentous and historic announcement in general conference last October of the new policy lowering the age of mission eligibility to 18 for young men and 19 for young women.

The response was immediate and unprecedented. It continues today, to the point that the Church’s missionary force now exceeds 60,000 for the first time in many years.

“We are thrilled with the response,” said Elder Russell M. Nelson of the Quorum of the Twelve in a recent interview, acknowledging the sacrifice of so many young people, senior couples, and the families who will be supporting them.

“Our first feeling is one of deep gratitude for the commitment and the consecration of these missionary families,” said Elder Nelson, who is chairman of the Missionary Executive Committee of the Church.

The outpouring of response in the wake of the change is illustrated in the number of new missions being created this year. As shown in the recent announcement, there are 58 new missions, raising the number from 347 to 405.

“We feel that the members are the key to making this extra missionary force particularly productive,” Elder Nelson remarked.

“We need to be more efficient in the use of these missionaries’ valuable time and service, which means the members, the ward council, and the ward mission leaders will have to pull together now, as we make missionaries available to individual units in the Church.”

Elder Nelson added, “We hope that our ward councils and ward mission leaders will play an active role in filling the daily planners for these missionaries so that they have appointments that are focused, meaningful, and relevant to the rescue of less-active members of the Church and their nonmember friends and relatives who are right in our midst.”

Elder David F. Evans of the Seventy, Executive Director of the Missionary Department, said the magnitude of the response was not altogether unexpected.

Even so, “it’s tremendously gratifying to see that what was envisioned by the First Presidency and the Twelve, as they had the faith and courage and responded to the deep spiritual impressions about making this change, come to fruition,” he said.

Beyond being dramatic, the increase in interest in serving missions is sustainable, Elder Evans said.

“Of course, there will be a surge that will last for about three years,” he said, alluding to a “pent-up demand” in the numbers of young people now able to serve missions as a result of the lowering of the age of eligibility.

“But what we are doing is building and creating missions to what we expect will be needed after the peak part of the surge. So we anticipate not needing to close any of the missions as we go forward.“

Thus, even after the surge, the number of missionaries will be much higher than what it has heretofore been, Elder Evans said.

“In addition to which, there are a lot of senior couples who are choosing to go,” he added. “I think of myself as young, but my generation is beginning to be at that age where they could go out again.

As did Elder Nelson, Elder Evans said missionary work functions best if members and missionaries work together “and if members and their leaders recognize that it is not a burden to have more missionaries, that this is the greatest opportunity to have a larger resource to help than we have ever had before.”

Elder Evans acknowledged that some extra sacrifice may be called for, particularly in families that now stand to have more than one missionary serving at a time.

“But I’ll tell you, this is going to be the most wonderful time,” he exclaimed. “If you’ve ever had a missionary out, you know that there’s nothing sweeter than a family gathering and praying for their son or daughter, or their brother or sister—or at times their parents or grandparents—for the Lord to please bless them while they serve their missions. Nothing, really, is more motivational for families than to have someone out serving and to have that be an opportunity to reflect upon our own commitment to helping others around us and bringing the blessings of the gospel into the lives of others.” 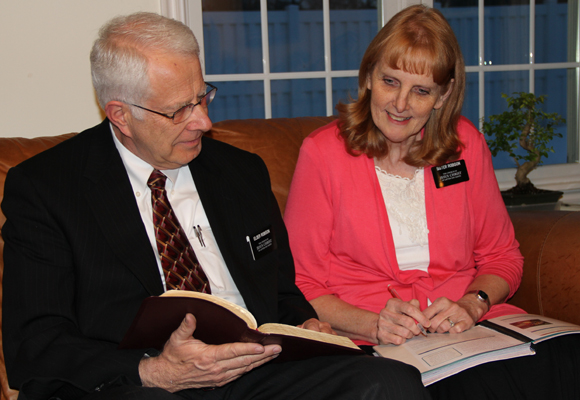 As for the young prospective missionaries themselves, Elder Evans said their enthusiasm and dedication is reflected in the letter he received from a young member of his ward at Christmastime. The young man reported that he and his friends are talking and behaving differently with an eye toward soon being missionaries.

“I think the Spirit of the Lord is moving upon this generation in a way that we’ve never before seen happen as a result of a specific statement or announcement made by the President of the Church, at least not in my lifetime,” he said.

Young people, he said, can prepare now by, first of all, reading the Book of Mormon and obtaining thereby the foundation testimony of the gospel of Christ.

They need not overcomplicate the matter of living the gospel, he said. “Just be good. You know what you should do, and the Holy Ghost will warn you about things you shouldn’t do.”

Young people should focus on temple worthiness, he advised. “Consistent with the words of the prophets today, participate in family history and temple work to the extent you can wherever you are.

He acknowledged that for young people approaching the age of 18, the prospect of missionary service suddenly looms larger and that, for some, that might seem daunting. 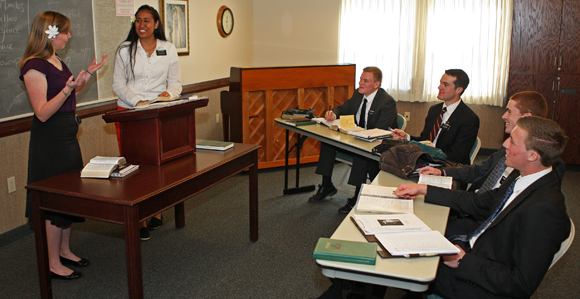 “President Monson said it is not a commandment that every young man go at age 18, or young woman go at 19, but he said each now has the option to do that, and in counseling with their parents and their priesthood leaders and their Heavenly Father, they should find out what they should do.”

He added, “But once we know what we should do, then it is incumbent upon every one of us to act in faith, to walk to the edge of the light and maybe a few steps beyond, where we can’t even quite see the end from the beginning, but we know we should be in that direction. As we walk with faith, all of the other answers are going to come.”

Elder Evans affirmed: “It’s going to take faith. It’s going to take a change of plans. It’s going to be a wonderful experience. And there are going to be thousands upon thousands of young people in this Church who grow magnificently as a result of doing exactly what President Monson asked them to do, which is to counsel with their parents, talk to their bishops and take it to the Lord to find out what He would have them do. And then do it!” 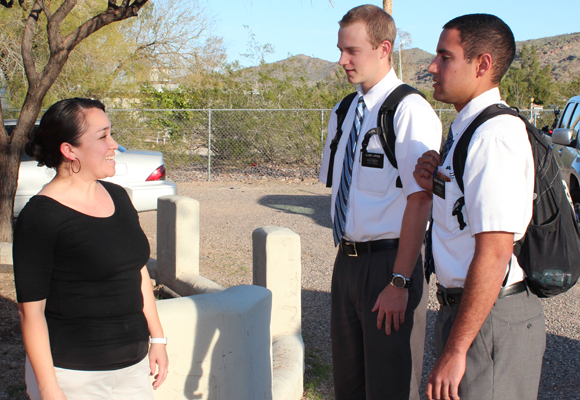 Sister Eloisa Cirne of the Phoenix Arizona Stake visits with the missionaries serving in her stake: Elder Scott Larsen (center), from Skaneateles, N.Y., and Juan Castaños, from Richmond, Va. Photo by Jill Adair.