Members and Missionaries to Partner in Work of Salvation 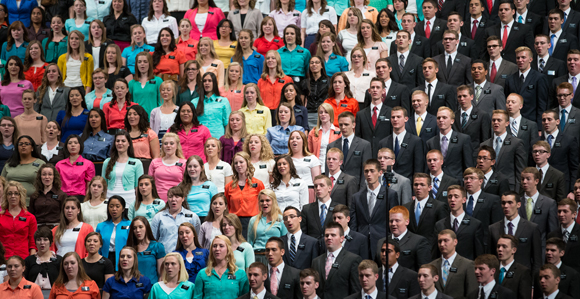 A 3,000-member choir of full-time missionaries and other Latter-day Saints provided the music for the broadcast in the Marriott Center on the campus of Brigham Young University Sunday, June 23, 2013. © 2013 by Intellectual Reserve, Inc. All rights reserved.

“We work together in faith and unity, faith that the Lord will guide our steps and unity with each other and the missionaries, always motivated by our love for Him, our love for one another, and our love for those we serve.” —Elder Neil L. Andersen of the Quorum of the Twelve

With the worldwide LDS missionary force surging due to the recent reduction in age for missionary service, Church leaders on Sunday, June 23, spoke via satellite to a global gathering of missionaries and local Church officers and members, presenting innovative approaches to missionary work, including the use of the Internet by full-time missionaries in their work and the opening of local meetinghouses to guided tours.

Emanating from the Marriott Center on the campus of Brigham Young University, the worldwide leadership broadcast featured prerecorded messages from President Thomas S. Monson and President Boyd K. Packer, President of the Quorum of the Twelve, as well as live and prerecorded presentations from other members of that quorum.

The broadcast was part of the annual training for new mission presidents, numbering 173 this year, more than ever before, gathered this week at the Provo Missionary Training Center for four days of instruction.

“To all the full-time missionaries sharing in this broadcast around the world, we say never again in your entire life are you going to be part of a zone conference this large!” said Elder Jeffrey R. Holland of the Quorum of the Twelve as he conducted the meeting.

“To the many members of the Church gathered in innumerable locations, we affirm that ward and stake councils can no longer say of this great army of missionaries, ‘There they go.’ No, the hour is upon us in which we must now say, ‘Here they come.’ All of us must plan for and use this heaven-sent resource in the most productive way possible.”

The number of full-time missionaries worldwide has surged from some 52,000 to an unprecedented 70,274 after last October’s announcement that the age of eligibility for service would be lowered from 19 to 18 for men and from 21 to 19 for women. Fifty-eight new missions were created to accommodate the increase, bringing the total to 405.

“We have asked, ‘What will all these missionaries do?’” said Elder L. Tom Perry of the Quorum of the Twelve in his address. “Our answer is that they will do the same thing that missionaries have always done; they will follow the Savior Jesus Christ and preach His restored gospel.”

But in this digital age, that will now include the Internet as a method, he said, explaining that for people today, online media are often their main point of contact with others, even close friends.

“During less-productive times of the day—chiefly in the mornings—missionaries will use computers in meetinghouses and other Church facilities to contact investigators and members, work with local priesthood leaders and missionary leaders, receive and contact referrals, follow up on commitments, confirm appointments, and teach principles from [the missionary guide] Preach My Gospel using Mormon.org, Facebook, blogs, email, and text messages,” Elder Perry said.

He added that Internet access and use of digital devices by missionaries will be introduced in phases over the next several months and into next year.

“Of course, safety is paramount in this new frontier of missionary work,” Elder Perry said. “Mission presidents will monitor missionaries’ online work to help them remain safe in all they do.” 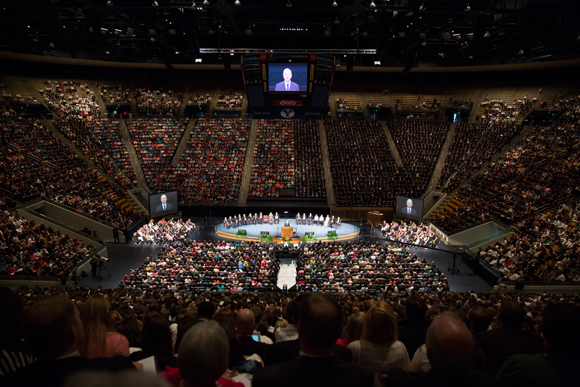 A complaint often received from people interested in the Church is they build up courage to stop by an LDS house of worship only to find it locked and empty, Elder Perry noted. The meetinghouses will now be opened for guided tours by missionaries.

“As missionaries enter this new age where they will use computers in the work of the Lord, we invite the young and the old, the adults, the young adults, the youth, and the children everywhere to join with us in this exciting new work by becoming Facebook friends with the missionaries in your area on your own computers and sharing their gospel messages online and by becoming involved in missionary work yourselves,” Elder Perry said.

A partnership between full-time missionaries and rank-and-file Church members, including members of stake and ward councils, was the subject of a prerecorded presentation by Elder Neil L. Andersen of the Quorum of the Twelve. He recounted through video interviews three recent experiences he learned about during a recent assignment he had in Tampa, Florida, in which Church members were effective at working with full-time missionaries to introduce people to the Church.

“We work together in faith and unity, faith that the Lord will guide our steps and unity with each other and the missionaries,” he said, “always motivated by our love for Him, our love for one another, and our love for those we serve.”

Elder Russell M. Nelson of the Quorum of the Twelve spoke of the unified nature of the work of ministering to others.

“Too often, we split the Lord’s work into parts we think are unrelated,” he said. “Whether it is preaching the gospel to nonmembers, serving with new converts, reactivating less-active members, teaching and strengthening active members, or performing family history and temple activity, the work is indivisible. These are not separate. They are all part of the work of salvation.” 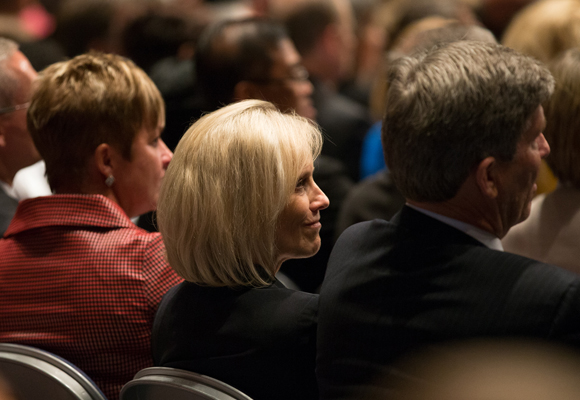 Couples will begin serving a three-year assignment as mission president, and each wife will serve as the husband’s companion. They received instruction during a worldwide missionary broadcast on the BYU campus. © 2013 by Intellectual Reserve, Inc. All rights reserved.

He compared it to a parable in which a father, noticing that a child is missing from a family gathering, immediately goes in search of that child.

“What parent would postpone looking for the child until a handbook was written?” he asked. “Good leaders, like good parents, take action because of love.”

President Packer, in his prerecorded address, spoke on the subject of teaching. “There are principles that we can learn; among them—perhaps the hardest one to learn—is to live so that you can abandon yourself and not read the script, just depend on the Spirit,” he said.

“I wish there would be a way to promise you that if you studied earnestly and seriously, that you would be better. It won’t hurt you, but it won’t make you better or even as good as if you trust in the Lord and trust in the Spirit.”

In his prerecorded remarks concluding the broadcast, President Monson endorsed all that had been said in it.

“Now is the time for members and missionaries to come together, to work together, to labor in the Lord’s vineyard to bring souls unto Him,” he declared. “He has prepared the means for us to share the gospel in a multitude of ways, and He will assist us in our labors if we will act in faith to fulfill His work.” 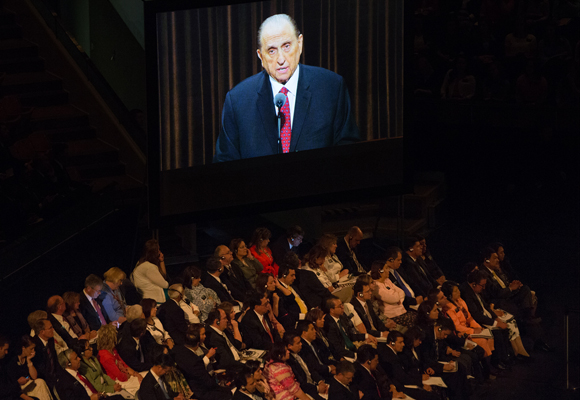 President Thomas S. Monson said that missionary work has always been important to him and his wife, Frances, who passed away recently. © 2013 by Intellectual Reserve, Inc. All rights reserved.

As part of his recorded presentation, a video clip was shown of a Church general conference talk he gave many years ago in which he told of an occasion when he presided over a Church mission in Canada. The incident related in that talk was dramatized with video images as he recounted his experience with a branch president in St. Thomas who set a goal to have a new Church meetinghouse built in his city. The branch had been meeting in the basement of a dilapidated lodge hall. Realizing he would need to have many more Church members to justify a new building, the branch president worked with full-time missionaries to meet and convert an architect, plumbers, electricians, and other craftsmen that would be needed to construct the building.

“Within 2.5 years, a site was obtained, a beautiful building was constructed, and an inspired dream became a living reality,” President Monson said in the earlier talk. “That branch is now a thriving ward in a stake of Zion.”

In the current recording, President Monson commented, “Many years have passed since that video was recorded. The voice you heard was younger, but the principle of faith as it pertains to missionary work remains just as true today as it was a half a century ago in the St. Thomas Branch.”