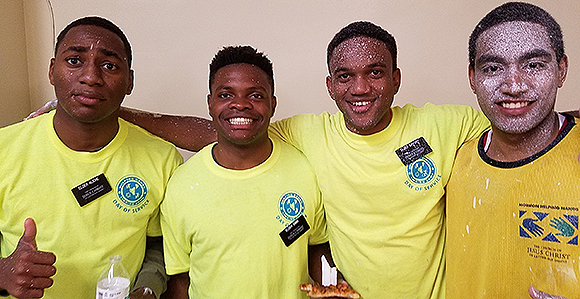 “[Elder Holland] asked if our young single adults and the full-time missionaries might donate some labor. … We saw the hand of the Lord, through an Apostle, making all this happen.” —President Steven D. Boone, Jackson Mississippi Stake President

When Elder Jeffrey R. Holland of the Quorum of the Twelve Apostles—traveling with area and local Church leaders—paid a courtesy call at the offices of the NAACP in Jackson, Mississippi, on January 27, 2017, they were cordially received. But the physical state of their hosts’ facility disturbed Elder Holland.

“The carpet was worn, the paint was peeling off the walls,” recalled Elder R. Randall Bluth, an Area Seventy who was with the group. “But the reception we received from them was warm and impressive.”

Meeting with some of the association directors, the group discussed doing some projects together, such as a family history fair.

The day after the visit, Elder Holland was meeting with the coordinating council of the local Church units, but it was obvious to those present that the condition of the association offices still concerned him.

“He said he felt inspired to help these good brothers and sisters of the NAACP,” recalled President Steven D. Boone, president of the Jackson Mississippi Stake. “He asked if our young single adults and the full-time missionaries might donate some labor. He charged us with the responsibility to see the work through. We accepted. It seemed like the right thing to do.”

President Boone made an offer of assistance to the association leaders, who graciously accepted the help.

Bishop DeWayne Eady of the Florence Ward, through his professional connections, was able to obtain carpet and to secure paint at cost for the project, President Boone said.

“We had 14 missionaries who worked shoulder-to-shoulder with a number of Church members,” said President Bruce L. Olson of the Mississippi Jackson Mission. “So many missionaries volunteered we had to limit the number. It really fortified the bonds between the members and the missionaries.”

The relationship of local Church leaders with the NAACP in Jackson had been established earlier when President David L. Morel of the stake’s Philadelphia Branch had performed community service with the Reverend Charles Hampton of the NAACP.

Reverend Hampton subsequently became president of the NAACP for all of Mississippi.

“We saw the hand of the Lord, through an Apostle, making all this happen. It all went so smoothly,” President Boone reflected.

Before the carpet could be installed and the walls painted, electrical and plumbing repairs had to be done.

“At the end of the project, Reverend Hampton stated most of the other contractors had let them down, ‘but you good brethren from the Latter-day Saints came through on your promise.’”

President Boone said, “We wanted to do it and do it right.”

Because of that, he was invited to a dinner in another part of the state where he accepted on behalf of the Church the Volunteer of the Year Award from the NAACP in Mississippi.

“After the presentation, I had dozens of people come to me to say that Church members had helped them out during hurricanes and other disasters,” President Boone said. “The former mayor of Hattiesburg said the Mormons had helped out after tornadoes.”

President Olson of the mission said the opportunity to help with the refurbishment is just one of the Lord’s tender mercies through which relationships are being strengthened between the Church and the community.

LDS missionaries serving in Jackson helped out with the recent opening of a civil rights museum in this capital city, further strengthening the Church’s relationship with the local community, said President Bruce L. Olson of the Mississippi Jackson Mission.

The opening ceremony for the Museum of Mississippi History and the Mississippi Civil Rights Museum was held December 9, 2017, an event attended by U.S. President Donald Trump among other dignitaries.

“We just received a certificate [on February 13], signed by the governor of the state congratulating and thanking us for having contributed over 300 hours to the museum dedication,” President Olson said.

Missionaries mainly helped with traffic control and guiding visitors into the facility, the mission president said.

The opportunity came after President Olson went with his wife, Sister Judy Olson, to tour the State Capitol in Jackson. There, they met the woman in the state department of archives and history who is in charge of volunteering. When President Olson asked if there was anything he or his missionaries could do to be of service, she informed him of the upcoming museum opening.

This service opportunity, together with missionaries’ and members’ participation in the refurbishment of the NAACP offices in Jackson, are just two of several ways in which friendships are being forged and strengthened, President Olson said. 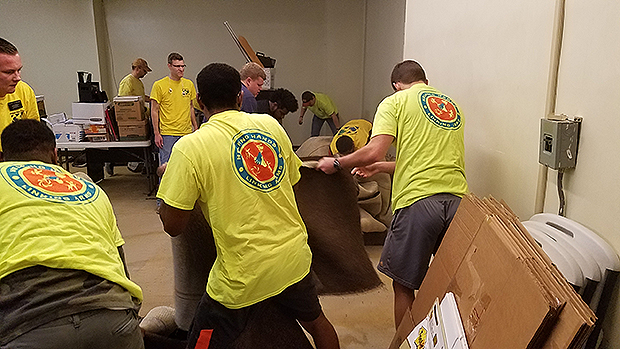 Full-time missionaries and young single adult members work together to replace carpets in the NAACP offices in Jackson, Mississippi. Photo courtesy of the Mississippi Jackson Mission.