Portuguese Members and Friends Participate in Day of Service 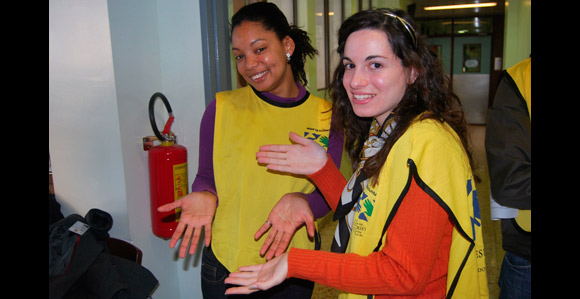 Elda and Ana, from the Setúbal stake, show their “Helping Hands.”

“Giving blood isn’t just a simple act. It’s also an opportunity to help someone I don’t even know.” Elisabete Rodrigues, member of the Lisbon Portugal Stake

About 600 members and friends of the Church across Portugal participated in a blood drive, on Saturday, December 17, 2011, making it the Church’s largest service activity ever held in the nation.

The event was in response to the invitation from the First Presidency that all members of the Church participate in a day of service during 2011. (The invitation was first shared by President Henry B. Eyring, First Counselor in the First Presidency, during his April 2011 general conference address.) The challenge was reinforced by a letter from the Europe Area Presidency sent in July, inviting all European countries to follow President Eyring’s counsel.

Blood drives have been organized by several Church units in Portugal in the past, but this was the first time for nearly all Church congregations in Portugal to participate simultaneously. The blood drive was made possible with the help of the Portuguese Institute of Blood, a governmental institution that manages blood donations in the country. The institute stationed personnel and supplies in five central locations covering the Coimbra, Lisbon, Oeiras, Porto, Porto North and Setúbal stakes. In smaller cities, Church volunteers donated blood directly at local hospitals. In the Algarve region, Faro, the southernmost city of Portugal, was the leading location in terms of units of blood collected.

Members and friends who participated in the activity wore the Mormon Helping Hands yellow vests, as the service day was organized under this volunteer program that provides relief and emergency help.

Elder Fernando A. R. da Rocha, an Area Seventy serving in Portugal, said, “We all participated in this event imbued with this Christian spirit, fulfilling in a small scale the commandment given by our Lord that we should love one another as He has loved us. It is through these initiatives that we can strengthen our ability to live the true meaning of the gospel of Jesus Christ, forgetting about ourselves for the benefit of our fellow beings.”

A total of 360 units of blood were donated by participants in this national day of service. According to the Portuguese Institute of Blood, each unit of blood can save the lives of three people. The month of December is the month during which hospitals and health centers need the most blood, because statistically speaking, December has an increase in traffic accidents, often associated with road travel throughout the holiday season.

Blood donors and others who participated gave a total of 1,300 volunteer hours, making this the largest service event ever for the Church in Portugal. Several local media outlets covered the day of service, and RTP2 (a nationwide public television station) will broadcast several programs depicting the event in coming months.

Preparation for the day of service began many months before with participation of local priesthood quorums and Relief Society organizations and the central coordination of the public affairs council. A poster made for the event was distributed to all meetinghouses by mid-September, and fliers were handed out to all members. Members were challenged to donate blood themselves and to invite friends, relatives, and neighbors to do the same.

Those who could not donate blood for health reasons participated in the preparation for and in the logistics of the activity. Elisabete Rodrigues, a member of the Lisbon Portugal Stake, said, “Giving blood isn’t just a simple act. It’s also an opportunity to help someone I don’t even know.”

The Church has been recognized in Portugal since 1974. Today there are more than 38,000 Church members living in Portugal, meeting in more than 60 local congregations. Members have participated in many service projects in the past, ranging from donating food items and medical supplies to creating emergency and neonatal kits to painting schools, planting trees, cleaning parks and forests, and helping the homeless, among others.

Members in Portugal plan to repeat the activity next year and hope to double both the number of participants and the units of blood collected.