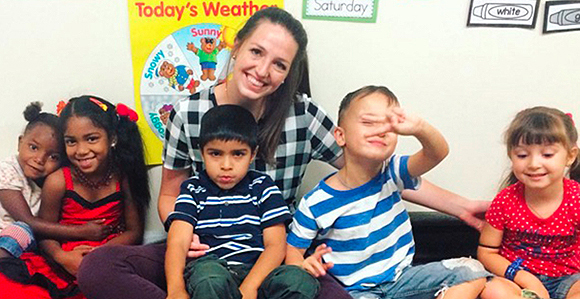 Jessalyn Denos, a student at Brigham Young University, poses with refugee children at the Sunnyvale Neighborhood Center, where she taught as part of an internship from April to August.

“Prayerfully determine what you can do—according to your own time and circumstance—to serve the refugees living in your neighborhoods and communities.” —Sister Linda K. Burton, Relief Society General President

Almost exactly six months ago, Sister Linda K. Burton, Relief Society General President, stood before the women of the Church to discuss the plight of refugees.

In her address on Saturday, March 26, during the general women’s session of the 186th Annual General Conference, she described the tremendous difficulties facing some 60 million refugees across the globe.

Sitting in a pew in her chapel in Murray, Utah, with her mom and sister-in-law, Jessalyn Denos, a member of the Alta View Ward, Sandy Utah Alta View Stake, listened as Sister Burton outlined the “I Was a Stranger” relief effort and encouraged women to “prayerfully determine what you can do—according to your own time and circumstance—to serve the refugees living in your neighborhoods and communities” (“I Was a Stranger,” Apr. 2016 general conference).

The invitation resonated with Sister Denos, who had returned a year prior from her mission to Cambodia. She recalled arriving in the foreign country that had a different language, a different religion, and a different climate and could empathize with what a newly arrived refugee must be feeling. As a missionary, she said, she had resources, “but I still felt scared and alone. I felt like a stranger.”

So Sister Denos, a student at Brigham Young University, chose to spend her summer completing an internship at a neighborhood refugee center helping prepare preschool-age children from Eritrea, Iraq, Ukraine, Afghanistan, and other countries to enter public school as kindergarteners.

In the six months following Sister Burton’s invitation, members of the Church—like Sister Denos—have been finding unique and personal ways to offer relief. “Just generally speaking, the outpouring and the interest by Church members has been exceptionally humbling,” said Rick Foster, a manager of special projects for the Church's Welfare Department. “They have embraced this idea that refugees are truly our brothers and sisters and that as disciples of Christ, we want to reach out and do all that we can to ease their burdens and to lighten their load.”

Deb Coffey, former executive director of the Utah Refugee Center, said they saw a definite increase in donations, offered by every age and physical ability—from a group of elderly women who bring homemade quilts once a month to mothers with little kids who have collected socks, toys, or other donations.

“When many hands step up and provide service, it definitely makes the load a lot lighter,” Sister Coffey said. “We produce so many great and wonderful results working together as a team. I love it. It’s amazing!”

And members have responded globally as well as locally.

A search of the relief efforts’ hashtag (#iwasastranger) on social media reveals projects as diverse as the people they serve. Members have posted acts of service from Austin, Texas, to Santiago, Chile; and Athens, Georgia, to Brisbane, Australia. Members in Tauranga, New Zealand, for example, collected warm blankets and bedding for refugee families in Auckland. Young women at girls camp in Virginia made picture dictionaries and fleece blankets to donate to their local refugee resettlement center. One 13-year-old girl organized a bake sale of cookies, pies, bread, and chocolate-dipped strawberries to raise funds. A youth group in Alpine, Utah, organized a carnival for local refugee children complete with food, face painting, and games.

Elizabeth Olson, a member of the Devonshire Ward, Meridian Idaho South Stake, posted a “view from my front door” where Congolese refugees were harvesting corn and beans that they grew in her yard. Sister Olson’s involvement in serving refugees goes much further than just providing garden space, however.

“We’ve grown an amazing friendship,” Sister Olson said of her relationship with Sarah, a Congolese refugee, and her two children, Isaac, 10, and Blessing, 17 months.

Sister Olson admitted that at first she was hesitant to get involved because of the time commitment. As the mother of five children, she already felt overscheduled. But she feels that the Lord has compensated the time she didn’t feel she had. “It’s been a blessing from Heavenly Father that when I make the time everything gets done that needs to be done.”

Getting to know Sarah and her children has also been a blessing to her family, Sister Olson added. “My kids genuinely love to be with her and her kids. I think [Sarah] has taught our family more than we’ve taught her.”

People often ask Sister Olson how they can help. “Once you meet [a refugee], the ‘how’ disappears,” she said. The first time Sister Olson met Sarah and her children, for example, Sarah made her dinner and was using a knife like a machete to open a tin can. Sister Olson then taught her how to use a can opener and introduced her to a rice cooker and crock-pot.

“It doesn’t have to take a lot of time,” Sister Olson said. “There are little ways everyone can help.”

Neighbors and friends have donated and contributed in ways that were specific to them. For example, Sarah recently received her driver’s license and purchased a car. A neighbor who works in insurance helped her to sign up for the correct insurance plan.

“I always tell people: ‘Envision yourself going to another country and you can’t speak the language. What would you need assistance with?’” Sister Olson said. Individuals or groups interested in serving can start by contacting their local refugee resettlement agency or checking justserve.org. The “I Was a Stranger” website (iwasastranger.ChurchofJesusChrist.org) also provides ideas.

“It’s up to people out in the community to be creative and to find ways that are meaningful to them but that will make a big impact in the life of a refugee,” Sister Coffey said.

For Sister Denos, her work with refugees this past summer has instilled in her a desire to continue serving. “I always want to be involved with this because it’s so important and there’s so much need.”

Going forward, Sister Coffey said she hopes the recent interest in helping refugees won’t be a spark that surges then dies. “[I hope] this can be a sustainable movement within our community and within [the Church] to keep moving forward and to keep finding new opportunities to stay engaged,” she said. 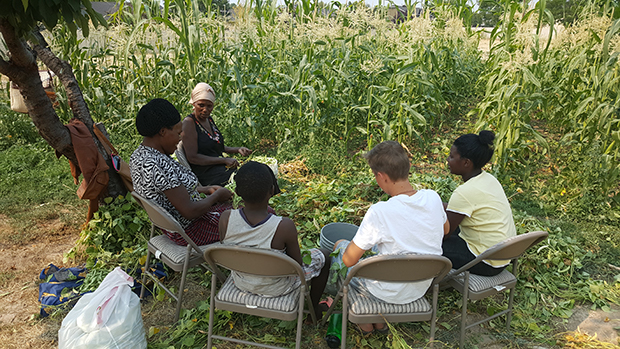 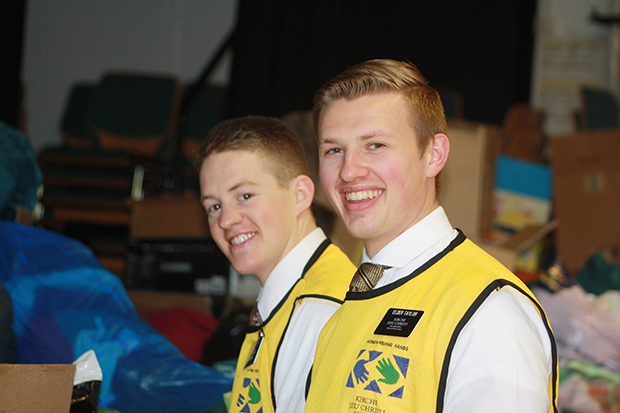 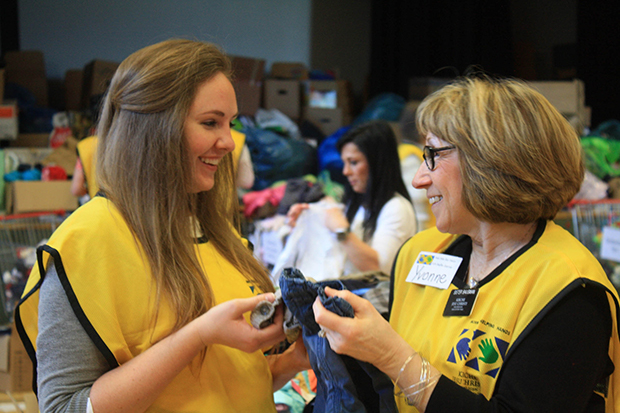 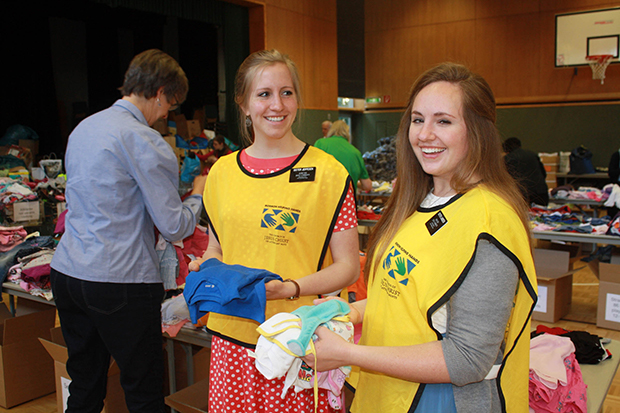 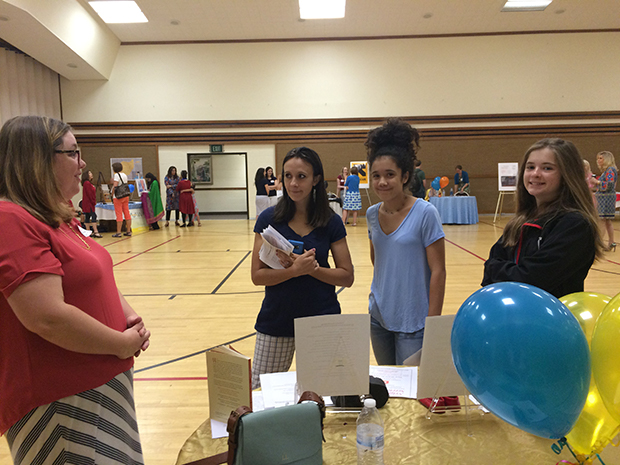 Laura Lindsay of the McLean Virginia Stake speaks to Kristy Wilcox, Alexandra Medina, and Hailey Holland on how to find ways to serve refugees during a Refugee Volunteer Fair held on June 4. Photo by Kimberlee Holland. 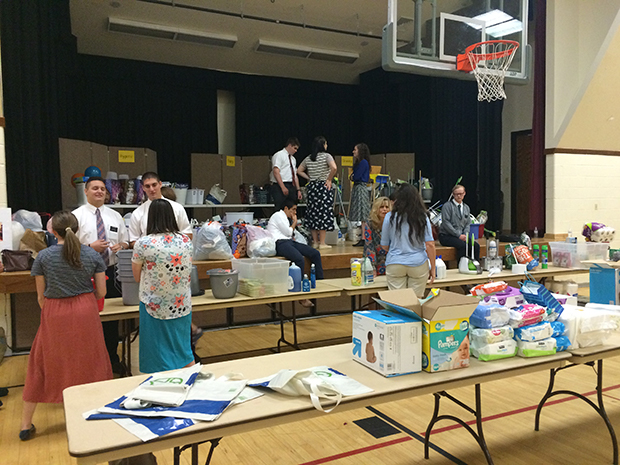 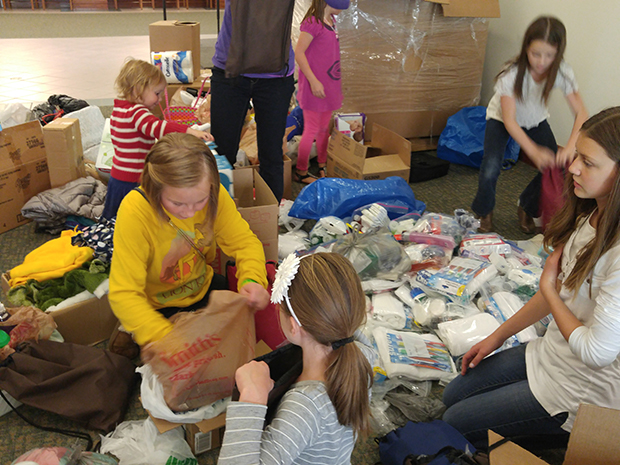 Children organize donations given to the Utah Refugee Center on Friday, April 15. Photo by Michelle Mullis. 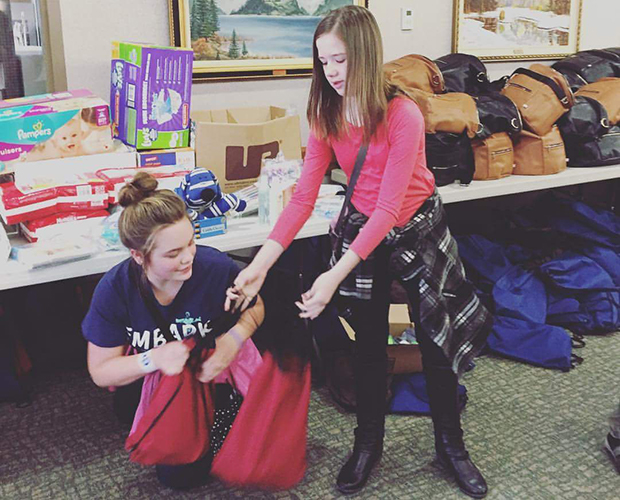