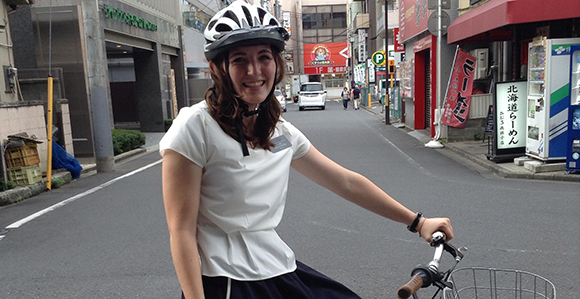 Anna Savage Hodge donned a skirt and pedaled a bicycle during her mission to Japan. Now she wears a U.S. Army officer’s uniform that includes a storied Ranger Tab.

“Looking back, I can see that God was there for me.” —Anna Savage Hodge, U.S. Army Ranger

Legions of women teach in over 30,000 Relief Society units across the globe—delivering weekly lessons that champion gospel learning, unity, and spiritual growth.

But only one Relief Society instructor, Anna Savage Hodge, goes to work each morning with a U.S. Army Ranger Tab sewn on the shoulder of her camouflage uniform.

Five years ago, not a single woman had graduated from Ranger School. Since then, only Savage Hodge and a handful of other female soldiers have completed the grueling Army training course that lasts more than two months and is staged in locales ranging from mountain peaks to sweltering swamplands.

So how did a lifelong Latter-day Saint-returned sister missionary-Army first lieutenant (and, yes, Relief Society teacher from Highland, Utah) become part of one of the world’s elite military forces?

For starters, the self-described tomboy was drawn to the physicality of the military. She was also anxious to graduate from Brigham Young University without burning through her savings.

“I thought ROTC [at BYU] might be a good way to pay for school,” she said.

But before committing to full-time active military duty, she answered a call to a different sort of service. Full-time missionary work in Tokyo taught lessons of resiliency and tenacity that she utilized during the most difficult moments of Ranger School.

“My mission has helped me a lot,” she said. “It’s where I learned how to deal with rejection and heartbreak. Those are mission experiences.”

Sharing the gospel in Japan is rarely easy. But rewards, she discovered, are gleaned in doing hard things.

Savage Hodge learned of Ranger School during her first ROTC year at BYU. At the time, women were not allowed to attend.

“But from the first moment I read about it, I wanted to go. It sounded like one of the hardest things I could do, and I was curious to see if I could make it through.”

A pair of female Army officers made history in 2015 by graduating from Ranger School. Gender is not considered for the course. Women must meet the same physical standards as their male counterparts. Minimum fitness requirements for all candidates include performing 58 push-ups, 69 sit-ups, running five miles in 40 minutes, and completing a 12-mile march with a 35-pound rucksack and weapon in less than three hours.

But successfully completing the course involves far more than push-ups, pull-ups, and jumping out of planes.

“Ranger School has been and always will be a team sport—or more accurately, a squad and platoon sport,” she said.

“Each time I hit the water, my body and lungs would seize up and it felt like I couldn’t breathe or swim very well. It was horrible.”

Soaked and shivering, she told a fellow soldier that she had an aversion to frigid water.

The soldier’s reply? Join the club.

“That really snapped me out of it, and I realized my hatred of the cold and cold water was nothing special,” she said.

And like many candidates, Savage Hodge did not pass Ranger School on her first attempt. But she persisted. She knew she was not alone.

“Looking back, I can see that God was there for me,” she said. “I was not always happy, but He helped me remain hopeful that I could always make it through one more event. ... He wanted me to see it through.”

Obviously, Savage Hodge’s family couldn’t join her at Ranger School. But she was fueled by their prayers, along with the priesthood blessings of loved ones. General conference talks—including President Dieter F. Uchtdorf’s April 2010 address “Continue in Patience”—offered added strength.

A well-worn copy of her patriarchal blessing lent “eternal perspective” amid the day-to-day grind.

Meanwhile, her husband, Matthew Hodge, “was so supportive of me,” she said. “He was always encouraging me stick it out, no matter how long I was there.”

A female Ranger candidate can still expect heightened scrutiny, she said. A male soldier might go unnoticed if he rarely volunteers to, say, pack the radio or the heavy machine gun. “But if a woman never volunteers, others will think you are avoiding it.”

She hopes her successful commitment to her Ranger training helped change a few lasting perceptions and perspectives.

When Savage Hodge was a missionary, she donned a skirt and pedaled a bicycle. As an Army officer, she wears a military uniform and trains with an automatic weapon. Professionally, she’s a platoon leader with the 173rd Airborne Brigade Combat Team in northern Italy.

“Being a full-time member of the military is full-time missionary work,” she said.

Many of Savage Hodge’s fellow soldiers know little about The Church of Jesus Christ of Latter-day Saints. She and other members in uniform enjoy a unique opportunity to represent gospel beliefs through their actions. People know that she is a Latter-day Saint, and she always keeps a copy of the Book of Mormon on hand to share with someone.

“There are so many chances in the military to speak with others that maybe a ‘normal’ job might not provide,” she said.

She and Matthew, whom she met on her mission, also find fellowship in their adopted ward. Serving together in the Church “gives us a chance to study and stay involved.”

“As long as you decide what you are going to do and what you’re not going to do, I don’t think there’s any reason to fear.”