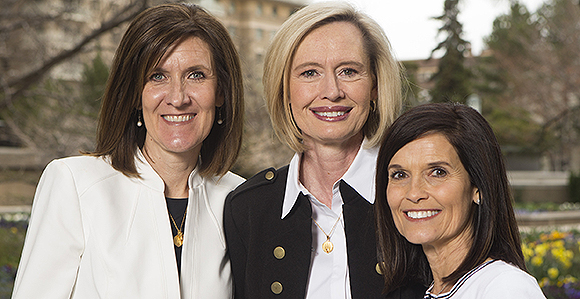 A much-loved scripture of Sister Cordon is found in Doctrine and Covenants 123:17: “Let us cheerfully do all things that lie in our power; and then may we stand still, with the utmost assurance, to see the salvation of God, and for his arm to be revealed.”

For her this verse encapsulates lessons she has learned throughout her life. “We can do hard things, but we can also do them joyfully,” said Sister Cordon, who was sustained on March 31, 2018, as the new Young Women General President.

That knowledge was instilled in her during a “fairytale childhood” laboring on a small farm in southeast Idaho and then again as she struggled to learn a new language as a missionary in Portugal. It was also a message she repeated often to missionaries while she served with her husband as he presided over the Brazil Curitiba Mission. And it is one she now plans to share with young women around the world.

Today’s young women, she said, are being asked to step up and move the work of the Lord forward. “And we can do it,” she added.

Bonnie Hillam Cordon was born on March 11, 1964, to Harold and Carol Rasmussen Hillam in Idaho Falls, Idaho. After her mission she received her bachelor’s degree in education at Brigham Young University, where she met Derek Lane Cordon. They were married on April 25, 1986, in the Salt Lake Temple. They have four children and four grandsons.

Her lifetime of Church service has included time as a nursery leader and seminary teacher. Before her call two years ago to serve as a counselor in the Primary General Presidency, Sister Cordon loved serving as a stake Young Women president. Even after being released from that calling, “I have never stopped praying for the young women,” she said.

A message she is eager to share with young women throughout the world is that she loves them and, more important, that God loves them.

When she was 16 years old, Sister Craig learned that her family would be moving from Provo, Utah, to Harrisburg, Pennsylvania, so her father could begin an assignment to serve as a mission president.

She was happy to be with her family, but the move left young Michelle “lonely socially” during her junior and senior years of high school.

“Those were really formative years,” Sister Craig said. “Instead of relying on friends, I relied on my family and my testimony, and church became a lifeline.” She valued most her relationship with Heavenly Father and the Savior.

Michelle Daines Craig was born on July 13, 1963, in Provo, Utah, and is the oldest of seven children born to Janet Lundgren and Robert Henry Daines III. She lived in Provo until her family moved to Pennsylvania. Two years later, Sister Craig returned to Provo to attend Brigham Young University, where she received a bachelor’s degree in elementary education. In 1984, she accepted a call to serve in the Dominican Republic Santo Domingo Mission.

“I have always been a believer,” said Sister Craig, who was sustained as First Counselor in the Young Women General Presidency on March 31, 2018. “From a young age, I knew that I was a daughter of God. But I remember [on my mission] that every time I bore testimony of the Prophet Joseph Smith, I would feel the Spirit. I had a beautiful confirmation that solidified my testimony.”

Just days after her return, Sister Craig’s brother told her she needed to go on a date with Boyd Craig, a friend from his mission. Eight months later the couple was engaged. They married on December 19, 1986, in the Salt Lake Temple. They are the parents of three children, and they have six grandchildren.

She has served in many callings, including as a temple ordinance worker in the Provo Utah Temple and as a Gospel Doctrine teacher. At the time of her call to the Young Women General Presidency, she was serving on the Primary general board.

There is a saying Sister Craven shared frequently as a missionary: “When you know who you are, you act differently.”

“And that’s in every aspect—from how you dress, how you speak, how you present yourself, and the activities you participate in,” said Sister Craven, who served with her husband, Ronald L. Craven, as he presided over the North Carolina Charlotte Mission from 2012 to 2015.

Rebecca Lynn Craven was born on October 26, 1959, in Chardon, Ohio, to Corless Walter Mitchell and Linda Louise Kazsuk Mitchell. Proud to call herself “an army brat,” she grew up in Texas, where her family joined the Church; Germany, during which time her family was sealed in the Swiss Temple; England; Utah, where she was baptized during her father’s first tour of Vietnam; and the U.S. states of Maryland, Kentucky, Missouri, and Kansas.

Married on August 5, 1980, in the Salt Lake Temple, the Cravens are the parents of five children.

Before being sustained to her new calling on March 31, 2018, she was serving as a counselor in a ward Relief Society presidency and as an ordinance worker in the Bountiful Utah Temple. She has also served as ward Young Women president, stake Relief Society board member, stake missionary, and Webelos leader.

Sister Craven has a bachelor’s degree in interior design from Brigham Young University, where she has served on the athletic advisory committee. She has also served as an executive board member of CHOICE Humanitarian, a Utah-based international charitable organization.

She enjoys hiking, water sports, snowshoeing, traveling, painting, quilting, and games and activities with her family.