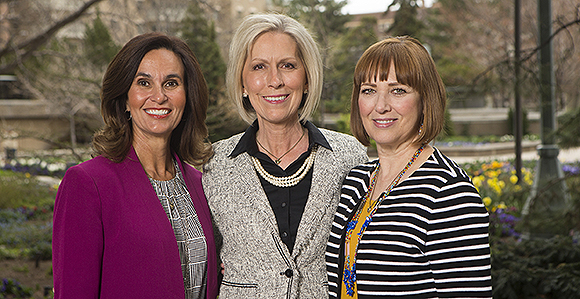 Sister Lisa L. Harkness, who was recently called to serve in the Primary General Presidency, has always had a love of learning and the world around her, something she picked up from her parents.

She has studied political science and even learned how to handle reptiles while working at the Monte L. Bean Life Science Museum during her time at Brigham Young University—including the snakes.

“They have personalities, believe it or not,” she said. “There’s one that knew me every time I would hold him.” Howard, a red-tailed boa constrictor, would crawl up her shoulder, curl around her neck, and rest his head on hers while she taught groups that had come to the museum.

Nowadays, Sister Harkness can still pick up and identify a variety of snakes, as long as they don’t hiss at her.

Announced during the Saturday afternoon session of general conference on March 31, the call came after Sister Bonnie H. Cordon, who had been serving as First Counselor in the Primary General Presidency, was released from Primary and called to serve as Young Women General President.

Sister Harkness was born in Los Angeles, California, to Ronald and LaRae Long on January 13, 1965. The oldest of five children, she and her family were “always up for adventures, being outside, and exploring the world.” She said that because she could always ask her parents questions, “I totally believed and trusted that I could go to Heavenly Father and get answers.”

After serving a Spanish-speaking mission in the Louisiana Baton Rouge Mission, Sister Harkness graduated from BYU with a bachelor of science degree in political science and secondary teaching. She married David S. Harkness on April 22, 1988, in the Salt Lake Temple. They have five children and two grandchildren.

She’s also volunteered with her local parent-teacher association, community council, the Utah Symphony, and the Timpanogos Storytelling Festival, as well as in her local government in various positions.