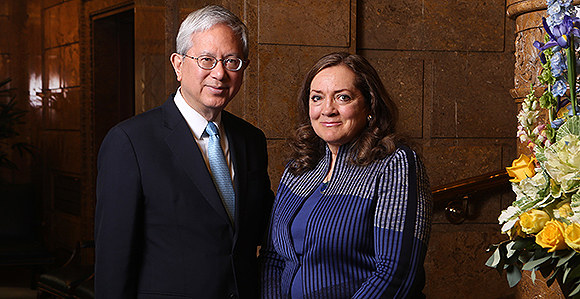 Elder Gerrit W. Gong and his wife, Sister Susan Lindsay Gong. Elder Gong, a newly called member of the Quorum of the Twelve Apostles, is characterized by his kindness, interest in others, love of family, and desire to build the kingdom of God. Photo by Jeffrey D. Allred, Deseret News.

“Ours is a worldwide Church. The restored gospel is for every nation, kindred, and tongue.” —Elder Gerrit W. Gong of the Quorum of the Twelve Apostles

Members of Elder Gerrit W. Gong’s family and the army of street children they enlisted to help them paint the scene stood back and examined the work.

Although the family had provided the sketch, paint, and brushes, something had shifted. The mural they created, which added light to the once colorless space, wasn’t theirs.

It belonged to the children.

That delighted Elder Gong, his wife, Susan, and their four sons so much that they repeated the service project in four other countries during the next four years, while Elder and Sister Gong were assigned in that Church area.

“I don’t know how it came to us; it just did,” said Sister Susan Gong. “We were grateful others were excited for children to have creative opportunities.”

As someone interested in the photographic impact of light, color, composition, and moment, Elder Gong imagines the children—and others like them in Nepal, Vietnam, Malaysia, and Utah—enjoying the space.

Now as a newly sustained member of the Quorum of the Twelve Apostles he will share a different kind of light with God’s children throughout the world.

Latter-day Saints across the globe sustained Elder Gong and Elder Ulisses Soares as Apostles during the Saturday morning session of general conference on March 31.

“Ours is a worldwide Church,” said Elder Gong. “The restored gospel is for every nation, kindred, and tongue.”

Born in Redwood City, California, to Walter A. and Jean C. Gong, Elder Gong comes to the apostleship with a background rich in education and experience. Elder Gong’s parents, both professional teachers, collectively spent more than 70 years in the classroom. Elder Gong, the oldest of three children, inherited his parents’ love for learning.

A Rhodes Scholar who worked for the U.S. State Department and for the Center for Strategic and International Studies in Washington, D.C., Elder Gong’s travels have taken him to all seven continents, including living in Asia for more than a decade.

Both Elder and Sister Gong served as full-time missionaries in Taiwan; the couple married in January 1980 in the Salt Lake Temple. They are the parents of four sons and have three grandchildren.

Elder Gong, whose ancestors left southern China in the late 19th century for work in the United States, was born into the Church. His mother met the missionaries as a teenager in Honolulu, Hawaii. His father joined the Church after attending Stanford University, where his parents met and dated. 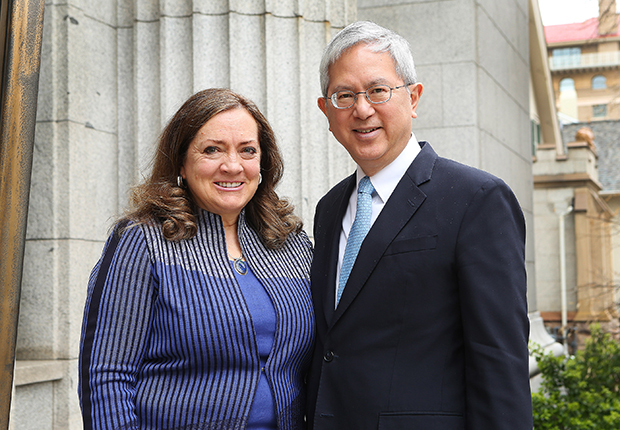 Elder Gerrit W. Gong, newly sustained as a member of the Quorum of the Twelve Apostles, and his wife, Sister Susan Gong, in Salt Lake City. Photo by Jeffrey D. Allred, Deseret News.

“I have had a testimony of the Church and gospel since I was very young,” said Elder Gong.

Sister Gong said there are three characteristics that are quintessential Gerrit Gong. “One, he is unfailingly kind,” she said. “Two, he is interested in everything, which makes him a fascinating person to live with. Three, he loves the Lord. He really desires with all his heart to build the kingdom and bless Heavenly Father’s children.”

A former bishop and stake president, Elder Gong has served as a General Authority since 2010 and in that capacity has seen the Church grow and develop across the world.

Assigned to organize the second stake in Bangkok, Thailand, Elder Gong participated in the calling of priesthood leaders. “After the meeting we entered a large room, where on chairs on three sides of the room priesthood leaders were ordained one by one,” recalled Sister Gong. “Once ordained they joined the growing circle of priesthood power.”

Elder Gong was with Elder Quentin L. Cook and Elder Gary E. Stevenson in Vietnam when the Church received official recognition. He witnessed how “the Lord touched many different people in Vietnam.” (See related story.)

Elder Gong said everywhere they go, people relate to Sister Gong. “Susan is other-oriented and down-to-earth wherever she is,” said Elder Gong.

Sister Gong is a “compulsive gardener” who loves to cook and “bring people together.” She has authored Chinese language children’s readers and was the first coordinator for Utah’s Chinese language dual-immersion program.

The couple hosts “grandkids camp” every summer, which includes crafts and adventures, and loves to travel with their sons.

Elder and Sister Gong said it was wonderful to join members from across the world for general conference, to sustain President Russell M. Nelson and the First Presidency, and “to witness continuing revelation bless the members of the Church in all their many circumstances.”

Of his new assignment, Elder Gong said it was overwhelming to have President Nelson tenderly take “my hands in his” and extend a call to the apostleship.

At that moment “you feel very humble, but you are certain in your confidence and love for President Nelson as the Lord’s prophet and Church President.”

Elder and Sister Gong said they have also felt the outpouring of support from members throughout the world. He said they have had an opportunity to “weep together and pray together.”

“I spent part of the weekend looking for synonyms for ‘overwhelming’ because ‘overwhelming’ doesn’t seem to cover it,” said Sister Gong. “I am just grateful to know that this comes one day at a time and that when you are on the Lord’s errand, you receive the Lord’s help.”

Elder Gong said he and Sister Gong love being with the members in every place they have the privilege to go. “Their circumstances are different, but their faith and testimonies are in many ways the same,” he said.

That is something the Gongs also learned from the children involved in their mural projects, undertaken during the Christmas season.

Every member of the Gong family had a special role in the project, from creating the sketch to mixing the paint to organizing the children.

Some places wanted to send only the best and most artistic children to participate. But the Gongs explained their project was an opportunity for all the children. “We’ve always been struck by the enthusiasm and skill of children who come together to beautify their environment,” Elder Gong said. 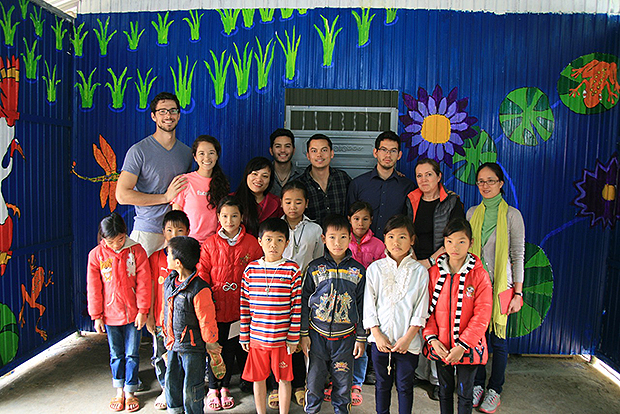 Members of Elder Gerrit W. Gong’s family stand in front of a mural project with the children who assisted them in Vietnam. Photo courtesy of the Gong family.