Clea Brown, a 101-year-old indexer, is reading an indexing record in her home in St. David, Arizona, on January 23, 2020. Photo by Maren Chadwick.

“Grandma exudes peace and has often told me to ‘take life as it comes.’ I believe this is because she has an eternal perspective. . . . The work she does is not simply ‘family history work’; it is the Lord’s work.” —Maren Chadwick, granddaughter

On January 23, a photograph was texted to the children, grandchildren, and great-grandchildren of Clea Brown. In it, the 101-year-old Latter-day Saint from St. David, Arizona, was sitting in front of her computer, pointing at some information on one of the millions of indexed records on FamilySearch.org. The photo’s caption read “This morning Grandma’s extraction and reviewing total reached 230,001!”

While Brown’s family congratulated her on this latest accomplishment, she just smiled and kept working on what she loved doing—indexing.

A Life of Indexing

Brown was born in 1918 on a family homestead in St. David, Arizona. In the small community where she was raised, she picked up the family history hobby from her friends. “I had some friends who were interested,” Brown said. “It just started with them.” Eventually Brown found her way to a computer, and soon her interest in indexing was born. “There was a meeting about how to use the technology [of microfilms] for indexing,” she said. “I went down to it and was interested in it all.”

Ever since the day she sat down at a computer and started indexing in the 1980s, she has found great joy in indexing. Through the years, she’s had to learn each new indexing software and system as they’ve been released. She first started indexing by extracting information on microfilms. As time passed, she switched to a computer-based program using printed copies of original records. Later, as technologies progressed, indexing records started coming from digital images on CD-ROMs, until both the program and the records could be found entirely online.

Despite the thousands of records Brown has indexed or reviewed over the years, Brown’s daughter Marial Mortenson said her mother values each one. “She works hard to read each record accurately so that she doesn’t make any mistakes,” she said. “She doesn’t want to make it any harder for the family members that are trying to find information.”

And while Brown has done multiple kinds of indexing records, she really enjoys indexing military records of soldiers the most. “I get excited when these records say their wife’s name,” she said. “I love taking the wife’s name to the temple.”

Blessings on Both Sides of the Veil

Mortenson said that indexing has blessed her mother immensely. “Indexing makes my mom very aware of what is going on,” she said. “It is also great exercise for her mental health and helps her to find pure joy.”

As a result of her mother’s indexing, Mortenson’s family has become closer to her as well. “My husband is a family history researcher,” Mortenson said. “Together with my mom’s indexing, we can help people find names to take to the temple. This makes our bonds together and on the other side of the veil stronger.”

Brown’s granddaughter Maren Chadwick also noted how her grandmother’s example has blessed her own life. “Grandma exudes peace and has often told me to ‘take life as it comes,’” Chadwick said. “I believe this is because she has an eternal perspective. Because she has so much life experience and has dedicated herself to charitable service, she knows that everything will work out. The work she does is not simply ‘family history work’; it is the Lord’s work.” 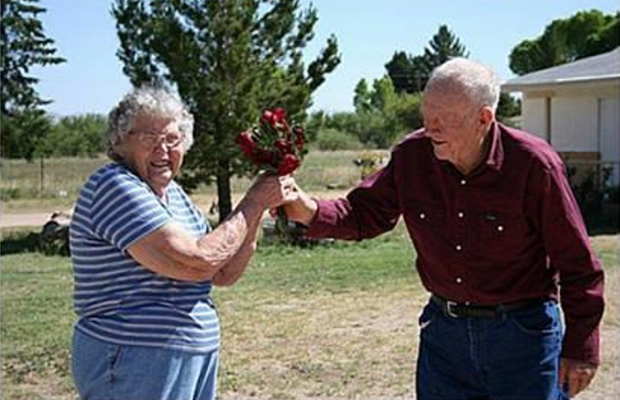 Clea Brown and her husband, Chester. Photo by Maren Chadwick.

So, what keeps Brown’s indexing habit going despite her advanced years?

First is her inner interest and motivation. “It helps me to do the Lord’s work,” she said. “And when you need help with something in your life, you go to the place to get it. I’m going to stay as close to that place as I can get.”

Second is the encouragement and support she feels from family and friends. “They keep asking about how many I have done and talk to me about it.”

Brown encouraged those interested in indexing to work hard. “Once you start, you’ll find little ways to keep going. And there will be plenty of end rewards to keep you on,” she said.