“Maybe We Can Help”: A Look into LDS Charities’ Efforts to Ease the Pain of Refugees in Rome 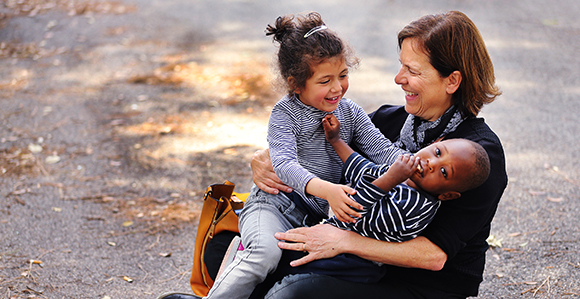 “We feel like we are offering hope to people. We are there saying, ‘Maybe we can help.’” —Anita Herway, LDS Charities missionary

The bold strokes of Fasasi Abeedeen’s pencil record the story of his tenuous journey across the Mediterranean Sea.

A screaming child is passed between adults to safety. A boy, struggling in a consuming sea, is gasping for air. A woman’s lifeless body is lifted from the water.

Wearing blue jeans and a green T-shirt emblazoned with the title that reflects this place—the Casa Scalabrini—Abeedeen shows his sketches to Tom and Anita Herway, missionaries for LDS Charities, who have been in Rome helping refugees for a year. Abeedeen knows he is lucky to be here, creating art in the shade of an outdoor patio.

In 2015, Abeedeen fled Nigeria, where he had just completed training as a sculptor. A political election scandal drove him from his homeland.

“I was forced to leave for my own life,” he said. “I didn’t even know where I was going.”

Traveling through Libya, he gained passage on one of two boats that were to carry passengers across the Mediterranean Sea. But one boat overturned, leaving the journey not only etched in his sketchbook, but also in his mind.

Clean cut and clean shaven, Abeedeen looks nothing like the people in his sketches. He is now numbered among a lucky few who have found refuge and inclusion at the Casa Scalabrini Order of the Catholic Church In Rome, Italy. The program and home support 30 refugees—some Christian, some Muslim—each year on their journey to self-reliance. With one-on-one mentoring, the residents find jobs, friends, and community.

“The real issue will become integration of the people that are all right here in this society, so they can say, ‘I belong to this society,’” general director Goacchino Campese said.

It is a program LDS Charities wants to assist, said Sister Herway, explaining the Church has completed one project with Casa Scalabrini and is currently completing a second. “When they leave they are totally self-sufficient.”

A place to go

The work is part of a much larger program to reach out to God’s children across the globe. In 2017, LDS Charities worked in 139 countries and territories on 2,705 projects with more than 1,800 partners to serve millions of people, according to the 2017 annual report.

LDS Charities missionaries in Rome—and other couples like them in Sicily, Italy, and Greece—are responding to a developing refugee crisis, where fewer refugees are entering the area and instead staying longer in Libya and other African nations, said Elder Herway. Many that do enter Italy do not have official refugee or legal status to access services in the country.

The “informally organized but very effective camp” includes more than 130 men and a handful of women and children living in more than 100 tents or shelters.

Limin Jaita of Gambia and Demba Sitapha of Senegal cook on an open stove and talk about the camp and peace they have found here. They dream of a future where things are better.

“Every time I pray, I pray for the good life,” said Jaita. “This life is poor. I want a place to sleep, a place to come.”

Andrea Costa, who has spent his days serving the refugees at the camp for the last three years, said volunteers have had to learn about the refugee crisis, what it means, and how to best help. He admits that before working with the camp, which started in the spring of 2015, he knew nothing about migration. He now tries very hard to listen to those he meets.

“What do they face: the unknown of the future. They don’t know where they will be tomorrow. They know they have a goal, but they don’t know if they will ever get there. They are very, very tired.”

He imagines the Baobob camp—where LDS Charities has donated large food tents and other supplies—to be a “peaceful pit stop,” where people can rest, refuel, and determine their next move.

The LDS Church’s young single adults bring dinner to the camp’s residents once a month. Other Latter-day Saints have found other ways to assist at the camp.

One way LDS Charities has supported the camp and others like it is through a partnership with MEDU, a mobile medical unit. Because refugees in Rome have little or no access to medical care or medicine, it is necessary to take a mobile clinic to them in the camps, said Anita Carriero, project coordinator of MEDU in Rome.

“Many times they don’t know they have the right to health care,” she said, explaining they have cultural mediators who can inform refugees of the possibilities.

Mulu Gheta, for example, has been in Rome for 15 years and three months. He speaks to a 16-year-old boy and urges him to share his story “so he won’t forget.”

The boy has a bacterial infection on his leg, most likely caused by going more than two months without a shower; the wound is cleaned and dressed by one of MEDU’s volunteer doctors.

The power of partnerships

Because the Church can’t provide services to all refugees, Elder and Sister Herway say they partner with many organizations—including the Red Cross, INTERSOS, and the Joel Nafuma Refugee Center—to collectively accomplish what cannot be done alone.

INTERSOS, which prominently displays the LDS Charities’ logo on their vans, is an organization that travels to refugee camps and picks up at-risk populations—women and children and young teenage boys—and brings them to their transitional housing units. While staying at the transitional housing, the refugees get showers, hot meals, and time to ponder their goals and next move. Sometimes professionals help them with legal paperwork and appeals.

Valentina Murino, director of INTERSOS for Italy, said the support of LDS Charities was instrumental in opening the complex in Rome.

That is also felt in the Red Cross camp in Rome where they are using shelters built in partnership with IKEA and LDS Charities. The “Better Shelters” campus was especially helpful this winter when snow fell in Rome.

Gaia Rovelli, who works with the Red Cross in Rome, said when LDS Charities and the Red Cross—who share a “long-lasting partnership”—were envisioning the project “we really tried to see ourselves in [the refugee’s] shoes.”

When looking at the huge refugee crisis, “it is often difficult to put the focus on the need” of the individual, she said.

“We feel like we are offering hope to people,” added Sister Herway. “We are there saying, ‘Maybe we can help.’”

Volunteers at the Joel Nafuma Refugee Center also focus on respect and empathy when providing services to the refugee community, said Drew Dilts, a volunteer coordinator with the organization.

For the past decade the center has been a safe place people can come, get food, and find acceptance; no one asks for an identification card when visitors walk in the center.

“They come and charge their phones.” It is a place from which “they are not being ushered away.”

Over the years, many guests asked, “Why can’t you open longer?” said Dilts. “It is a lack of resources.”

So the Church and local members are stepping up to help.

Beginning this month, Latter-day Saints in Rome will sponsor an afternoon “friendship center”—where members will teach classes every day from 2:30 p.m. to 6 p.m. on subjects such as language skills, employment training, and health care. The goal is to find ways to serve the refugees while promoting self-reliance, Elder Herway said.

Dilts said when he started working at the center, he thought people would come for food or work. He has since learned that they want something else. They come seeking “peace of mind” and “respect,” he said.

That’s exactly what Fasasi Abeedeen is trying to communicate with his artwork. His sketches—used by him as a guide to create beautiful sculptures—were recently exhibited under the title “My Journey.”

Abeedeen, who studied art at advanced institutions in Nigeria, just needed the opportunity to get his feet on the ground and start again after he arrived in Italy. But, he laments, so many never get the services he received.

“I will be very happy if I have the opportunity to teach,” he said. “Some people may not know they have the talent.”

He also wants to continue to explore the feelings that are inside of him and “pull them out.”

Those feelings, he said, continue to evolve.

His first art exhibition in Rome was titled “My Journey.”

Now, however, he is drawn to sharing the plight of other marginalized populations in Rome, such as the homeless.

When completed, that exhibition will be titled “Hope.” 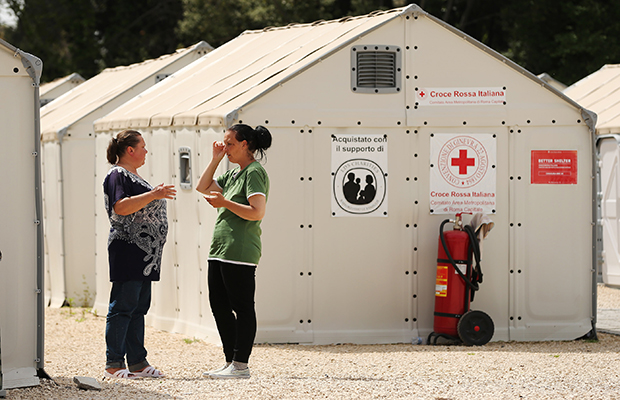 Shelters at the Red Cross in Rome. LDS Charities contributed the shelters to the organization. Photo by Jeffrey D. Allred, Deseret News. 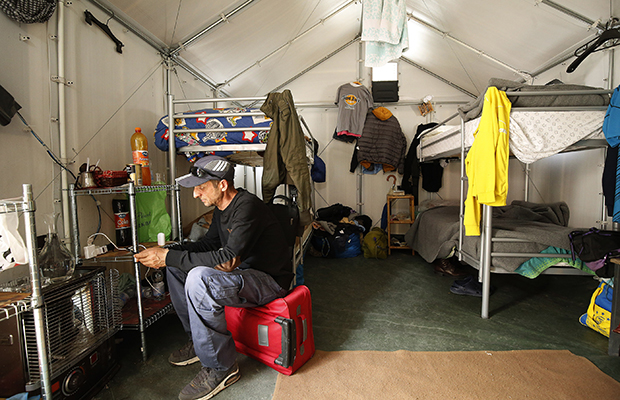 Desovic Predrag sits in his shelter at the Red Cross in Rome. LDS Charities contributed the shelters to the organization. Photo by Jeffrey D. Allred, Deseret News. 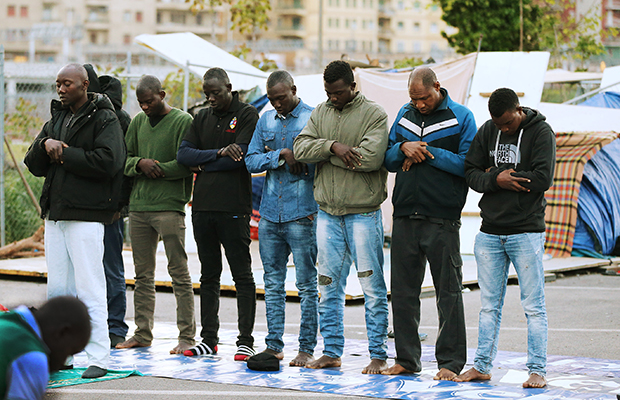 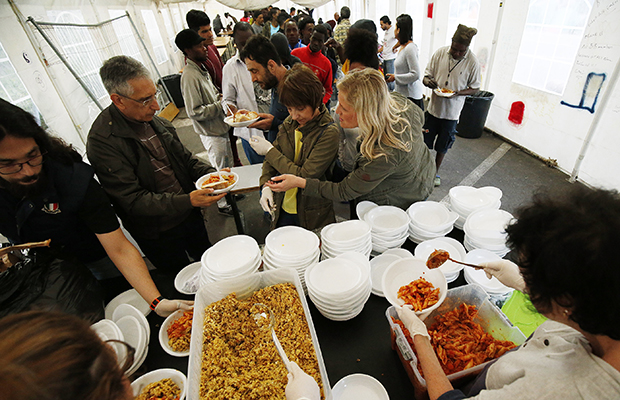 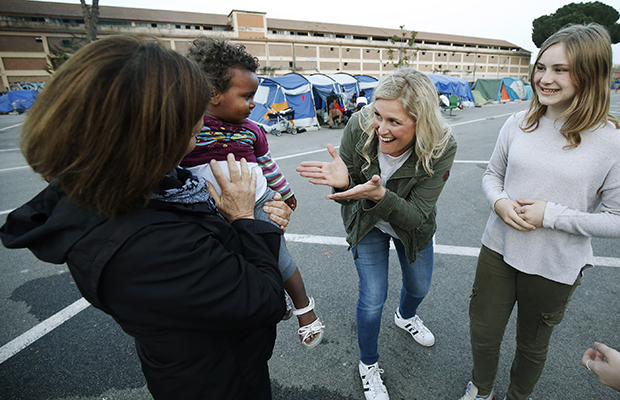 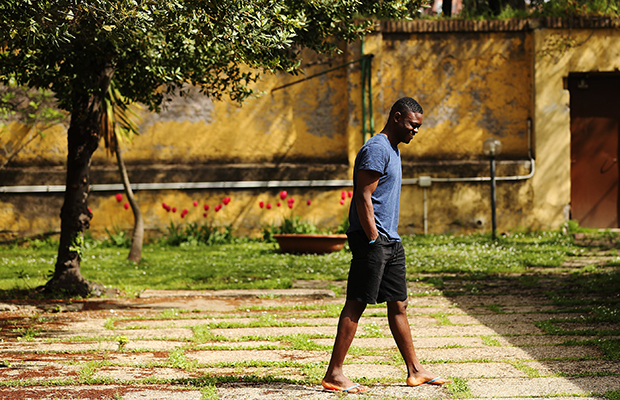