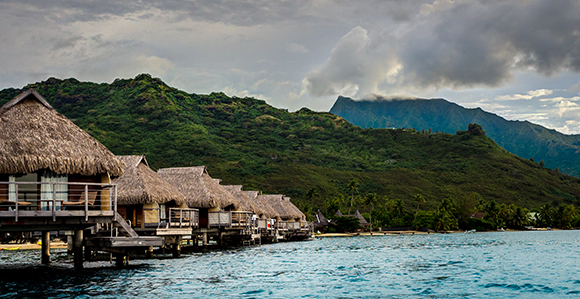 Bungalows line the oceanfront of an island in French Polynesia.

“[The memorial is] not just about 14 members of the Church drowning. . . . It’s also about the love of an Apostle who went out of his way to go and console them.” —Tahiti Papeete Mission president Steven Fox

On the island of Maupiti, part of French Polynesia, in the South Pacific, the people know that the ocean can be unforgiving—often taking as much as it gives.

Near the tiny island, known as a coral atoll, is the pass of Maupiti, one of the most dangerous stretches of water between the islands. On the morning of May 23, 1963, the pass of Maupiti became the site of a tragedy when an interisland trading boat overfilled with passengers coming from the island of Huahine was caught in the rough seas of the pass. The vessel was rolled by the waves, tossing the 42 passengers and four-man crew helplessly into the ocean before crashing against the reef.

Among the passengers that day were a number of members of The Church of Jesus Christ of Latter-day Saints who were traveling back to their homes on Maupiti after attending the dedication of a new chapel on Huahine by then Elder Gordon B. Hinckley of the Quorum of the Twelve Apostles.

Newspapers from the islands reported that day that 15 lives were lost in the tragedy, four of whom were children under the age of five. Of the 15 lost, 14 were members of the Church.

Among the survivors from that day was a nurse named Claire Teihotaata. Although she herself was injured in the accident, she disregarded her personal injuries in order to tend to the needs of others. Among her actions in the aftermath was her decision to send a telegraph to Church leaders, knowing that many of those injured and killed in the accident were members.

It was through her telegraph that word of the tragedy reached Elder Hinckley, who had returned to Tahiti following the dedication of the chapel on Huahine.

After learning of the event, Elder Hinckley traveled immediately to the island of Maupiti to attend to the people. He arrived on the morning of May 24 with President Kendall W. Young, the mission president in French Polynesia at the time, and brought wood caskets for the bodies of the deceased.

President Young described Elder Hinckley’s response at the time by saying, “He took the grieving family members in his warm embrace and wept with them.”

In Elder Hinckley’s own account of the day, he wrote, “This has been a terrible day. I’m glad I came. . . . I shall never forget Maupiti.”

During his time on the island, Elder Hinckley became personally acquainted with Teihotaata who—according to an account from her granddaughter Hina Ioane—received a blessing from the Apostle before his departure. Through their shared experience, Elder Hinckley and Teihotaata formed a friendship that continued until his passing in 2008 and is one that he spoke of publicly over the years. Additionally, their friendship, along with the dedicated work of the missionaries on the islands, helped lead to Teihotaata’s conversion and baptism on July 1, 1963.

“My grandmother was really touched by the love the missionaries had for the people of the island and their willingness to serve and to help the people,” Hina Ioane said. “That was an important factor in her conversion.”

Nearly two years ago, when the current Tahiti Papeete Mission president, Steven Fox, first learned the story of the 1963 tragedy and the friendship of Teihotaata and Elder Hinckley, he felt a desire to formally honor the event and the lives lost.

“It’s not just about 14 members of the Church drowning,” he said. “It is about that, but it’s also about the love of an Apostle who went out of his way to go and console them. It’s a beautiful, beautiful story, and I was touched by it.”

After learning of the story from Steve Thomsen, a BYU professor who had researched the event during his time as a missionary in French Polynesia, President Fox began the process for seeking approval from the Church and the local government to erect a memorial in honor of the Maupiti tragedy. After getting the necessary approvals, President Fox said he is looking forward to May 22, 2020—the day a new memorial marker will be dedicated on the grounds of the Church’s meetinghouse on the island.

President Fox shared his hope that the memorial will serve to honor not only the lives of those who died in the tragedy but also the legacy of Elder Hinckley and the families of all those affected by the loss on the islands.

Since introducing the idea for the memorial, President Fox said that both local and general leaders of the Church have been very supportive, and he is excited to see how plans move forward leading up to May next year.

“It’s a compelling, wonderful story,” he said. It’s about love and loss, and the memorial will honor both.

—Steve Thomsen, professor of communication at BYU, contributed to this article.