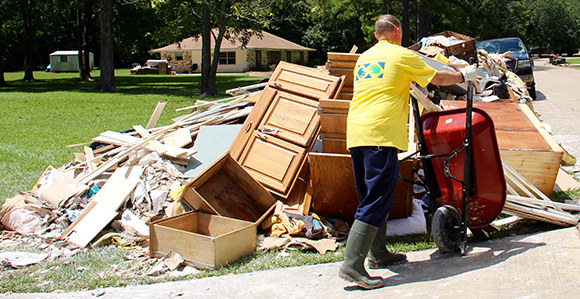 Church-sponsored relief efforts are continuing in communities here still reeling from what is being called the “Great Flood of 2016.”

Several days of historic rainfall in mid-August overwhelmed rivers, caused widespread flooding, and damaged or ruined more than 60,000 homes in Louisiana. Hundreds of Latter-day Saint families are counted among the legions affected by the flooding. Some 450 member homes were inundated and suffered various levels of damage.

The Baton Rouge Louisiana Temple was not affected.

Members throughout the flood-affected regions responded immediately to help those in need. Some used boats or large trucks to rescue those in immediate danger. Later, when the rains finally cleared, their attention turned to ongoing relief projects.

Hundreds of members and missionaries from the Louisiana area have been enlisted to help folks “muck out” their homes—removing mud and filthy water, pulling down damaged drywall, and salvaging furniture and other household items. 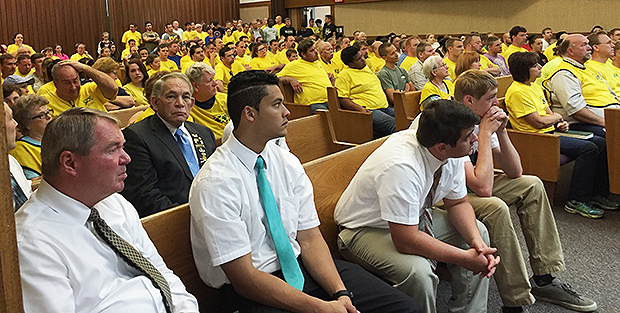 Members gather at the Hammond, Louisiana, meetinghouse for an abbreviated sacrament meeting August 21 prior to heading out to area communities to help clean up damaged homes. Photo courtesy of Martha McKay.

“We’re keeping very busy,” said Baton Rouge Louisiana Stake President Eric Bascom. “The past couple weeks have been difficult, but we’ve seen an outpouring of love from so many people.”

Such generosity is expected to continue over the coming two weekends. Thousands of Latter-day Saint volunteers from across Louisiana and several other surrounding states will be coming together to form a massive army of Helping Hands relief crews. Their cleanup efforts will focus on both flood-affected members and anyone else who needs assistance.

“When our people in their Helping Hands T-shirts arrive at flooded homes, we hope we can be a breath of fresh air,” said President Hollis. 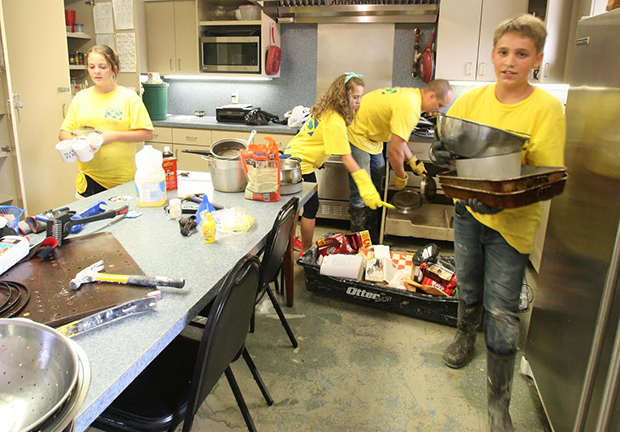 Members of all ages help clean up a Baton Rouge fire station damaged by floodwater. Photo courtesy of Martha McKay.