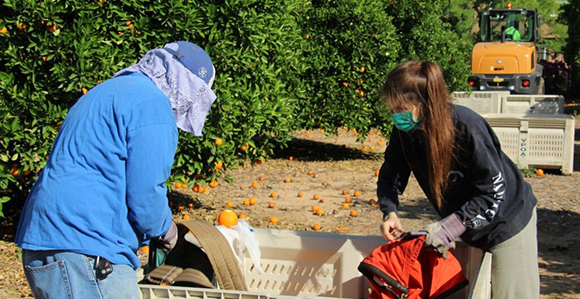 Masked volunteers place ripe oranges into a large collection bin during a Church welfare project at a city-operated orange grove in Redlands, California, on May 9, 2020. Photo by Karen Bell.

“When a call goes out, they have never said no—they always come through.” —Paul Foster, mayor, Redlands, California

So, what’s a place like Redlands, California, to do when its city-operated annual orange harvest is being jeopardized by the ongoing pandemic?

The Southern California city was once synonymous with the orange industry—earning the title “Washington navel orange–growing capital of the world.” The local economy is no longer dictated by agriculture, but the city maintains several orange groves as a nod to its citrus heritage.

City workers usually handle the annual harvest at the Redlands groves, with much of the fruit typically distributed to people in need.

But the 2020 harvest is different because of COVID-19. City workers have often been needed elsewhere, even as the Redlands oranges grew ripe and ready for picking. Social-distancing requirements also impacted typical harvesting operations.

Many feared a sizable portion of the fruit would go to waste.

So the city drew upon its long-established relationship with members of the Redlands California Stake of The Church of Jesus Christ of Latter-day Saints, who volunteer in large numbers each April for a Community Day of Service, said Jennifer Moore of the stake’s communications council.

The pandemic forced the cancellation of that annual service activity. But when the city’s orange harvest operation was impacted by the COVID-prompted shutdown, “they reached out to the Church to see if it could provide volunteers to help harvest at one of the city groves,” added Moore.

The picked fruit could then be distributed to local charities that provide food for seniors and other families in need because of the ongoing economic toll exacted by the virus.

Following the city’s request for help last week, a call for volunteers was dispatched across the Redlands stake.

On Saturday, May 9, Southern California’s renowned sunny skies welcomed more than 200 Latter-day Saint volunteers and a number of their friends for the impromptu harvest at a designated Redlands city orange grove.

“We spread out the harvest over 11 hours so that there were not too many people at the grove at one time,” said Moore. “We were also asked to wear masks as much as possible and maintain social distancing during the harvest.”

The volunteers worked Saturday alongside city workers, who were on-site to provide packing crates and operate trucks to move out the picked fruit.

For Redlands Latter-day Saints who have spent the past couple of months largely separated from one another because of the pandemic, working together—albeit at a safe distance—marked a joyful Saturday.

“It was a fabulous experience to see our brothers and sisters in the gospel,” said Moore. “Just being engaged in a common cause was immensely rewarding.”

Knowing others would be fed and blessed by their efforts only added joy to the day.

Much of the success of Saturday’s volunteer orange harvest is being credited to the Church’s well-established friendship with both city leaders and others in the Redland religious community.

The stake’s director of communications, Judy Cannon, serves as president of the local interfaith council. “And the council works together on different humanitarian projects and also an annual Community Day of Prayer,” said Moore.

The Church and the city of Redlands have “developed a great relationship over many, many years that goes back to when the Redlands California Temple was built in 2003,” added Redlands California Stake president Michael Strong. “We’ve had some wonderful community days of service.”

Redlands mayor Paul Foster and several other city administrators and staffers joined the volunteers Saturday for the orange harvest. It was exhilarating, he said, to work outdoors with others in the community for the good of the city.

The mayor said he treasures the proven willingness of his Latter-day Saint neighbors to help wherever it’s needed.

“When a call goes out, they have never said no—they always come through,” Mayor Foster told the Church News. “I’m more grateful than I could ever express in words.”

President Strong said he was not surprised to see the folks in his stake on Saturday slap on sunblock, pull on masks, and spend the day together picking oranges for others in need.

“The members are wonderful, and they are eager to serve together.”

Cannon added the stake’s frequent connections with their neighbors across the city made Saturday’s quick-to-mobilize effort a success.

“They know we can activate people in a relatively short period of time,” she said. “Everyone was anxious to do something and get involved.” 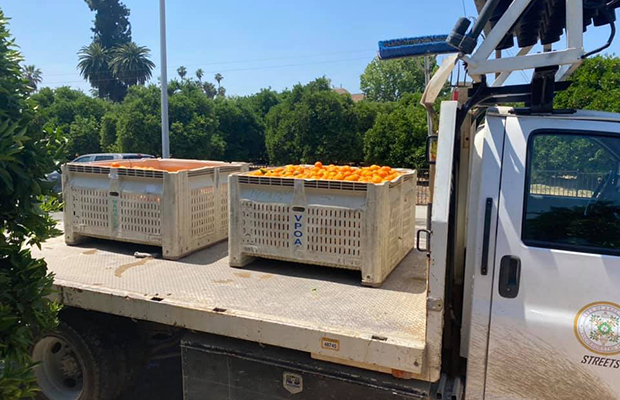 Bins filled with oranges picked by Latter-day Saint volunteers rest on the bed of a city truck during a May 9, 2020, orange-picking project in Redlands, California. Photo by Judy Cannon. 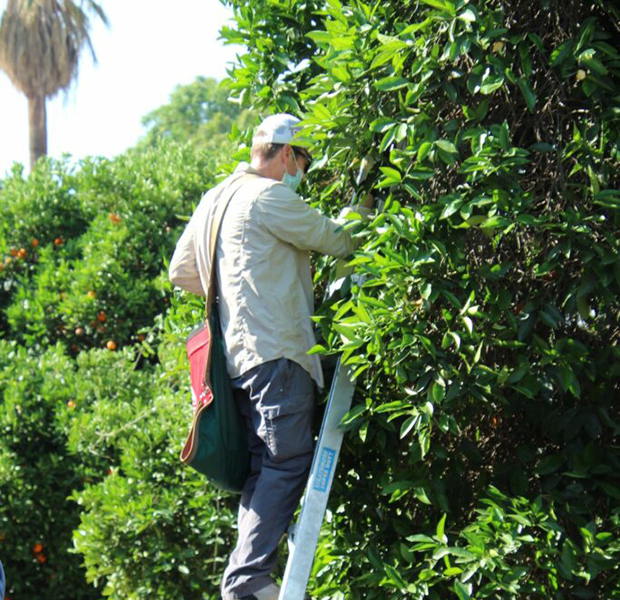 A Latter-day Saint volunteer reaches deep into a tree to pick oranges during a May 9, 2020, humanitarian project at a city-owned orange grove in Redlands, California. Photo by Karen Bell.