Many Struggles with Faith Are Based on Mormon Culture, Not Doctrine, Professor Says 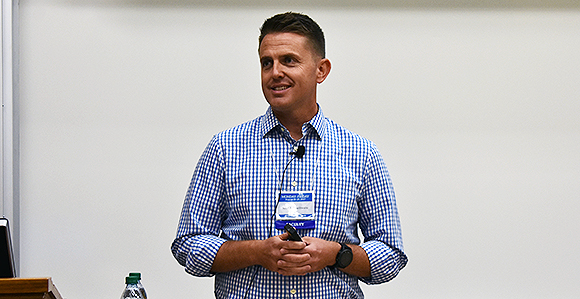 Scott R. Braithwaite, an associate psychology professor at Brigham Young University, gives a presentation about supporting those we love through crises of faith at BYU Education Week on Monday, August 21.

“I think many struggles with faith are struggles with cultural Mormonism. They’re not necessarily rooted in the canonized, theological doctrine of The Church of Jesus Christ of Latter-day Saints.” —Scott R. Braithwaite, BYU associate psychology professor

“Fundamentally what this is about is people, and I think that having an understanding of people maybe helps to understand some of what’s going on and also helps us to understand what we can accomplish,” Braithwaite said.

He expounded the stages of faith described by James Fowler, who was a Methodist minister and theology professor at Emory University.

“These stages of faith I think are helpful because they help us to realize that there’s not just one way to have faith,” Braithwaite said.

Most people, according to Braithwaite, remain throughout their lives in Fowler’s stage three faith, which is a synthetic-conventional faith characterized by conformity to authority, a strong cultural element to religious life, an “us versus the world” perspective, and ignoring any conflicts with one’s beliefs due to the fear of threat from inconsistencies.

“Stage three faith I think opens you up to being the most vulnerable to a faith crisis because it establishes a set of expectations that are impossible to achieve,” Braithwaite said. “They live in a world that’s binary: it’s black and white, where the Church is all good and couldn’t possibly do anything not good, and the world is wicked and bad.”

This idea of perfectionism can be dangerous because “most faith traditions have certain elements of humanity attached to them,” according to Braithwaite.

“There’s a pretty key difference between a healthy striving toward trying to become like our Savior, realizing that the only way to do that is to yoke ourselves to Christ through covenants, and thinking that you need to become perfect on your own,” he said.

“I think many struggles with faith are struggles with cultural Mormonism,” Braithwaite said. “They’re not necessarily rooted in the canonized, theological doctrine of The Church of Jesus Christ of Latter-day Saints.”

Having questions is normal, Braithwaite explained, but it’s important to face them head on and address them early to avoid the risk of becoming cynical.

“There is something that we can do to help them move forward, but it requires an awful lot of work,” Braithwaite said. “It requires discipleship.”