Making Decisions: 5 Things to Do When You Don’t Know What to Do 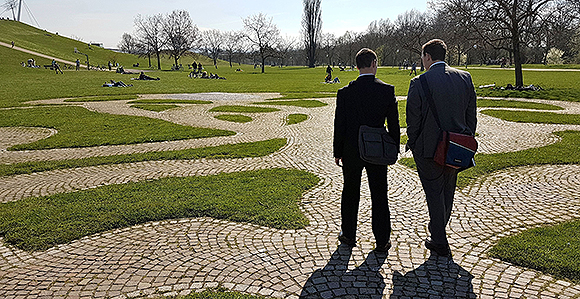 “Making weighty decisions and aligning our wills and actions with God’s are opportunities for growth that we will experience for all of mortality,” LDS Business College president Bruce C. Kusch said during a September 24 devotional.

“Read the scriptures and the words of living prophets, and hold on to them for dear life.” —Bruce C. Kusch, LDS Business College president

In 2007, Bruce C. Kusch began doctoral studies in instructional design at Idaho State University. At the beginning of the semester, his class was given a pre-test to help the teacher understand what the students knew about this particular subject.

For two decades prior to this class, Kusch had worked in the high technology industry and had never felt the need to study anything related to educational theory. And as he read over the 70 questions in that pre-test three times over, he realized he knew absolutely nothing about the subject.

“So I did the only thing I could think of in the moment,” he said. “I took the blank test, wrote my name on it, and handed it back to the professor and said, ‘I don’t know anything about any of this stuff. It is pointless for me to even try to answer anything. I’m going home.’”

Speaking as LDS Business College president to students gathered in the Assembly Hall on Temple Square for a Tuesday, September 24, devotional, President Kusch said that each person will face a circumstance much like his, where “we just simply don’t know what to do.”

There will be significant situations in each person’s life where he or she will need to make weighty decisions, President Kusch said. “Making weighty decisions and aligning our wills and actions with God’s are opportunities for growth that we will experience for all of mortality.”

1. Know That It All Starts with You

To make important decisions, diligent effort is required, even when there isn’t much time to make that decision.

“But if you will start with a little study, a little reflection and pondering on what the issue or issues are that you are confronting, you will be well on your way to knowing what you should do,” President Kusch said.

2. Learn from the Experiences of Those Who Have Gone Before

Joseph Smith, Nephi, and Alma are often seen as role models who could make quick, correct decisions. But, as President Kusch pointed out, they had moments when they had no idea what they should do.

Whether it was trying to find Christ’s correct Church, attempting to obtain the brass plates, or figuring out how to handle members of the Church who had turned to wickedness, these men faced challenges they had never encountered before.

“In those moments, these three were very much like us,” President Kusch said. “There are lessons for us to learn and apply as we search these accounts and seek to identify patterns and principles that we can follow.”

3. Anchor Your Faith and Works on Scriptural Absolutes

Citing verses from the Book of Mormon (1 Nephi 15:24 and 2 Nephi 32:1–3) and New Testament (James 1:5–6), President Kusch counseled students to pray with faith, hope, and real intent and to hold fast to the word of God. Those who do are given “the sure promise that feasting on, seeking, and searching the words of Christ will tell us all things that we should do.

“Pray with great faith,” he said. “Read the scriptures and the words of living prophets, and hold on to them for dear life.”

4. Do Your Part and Trust in God’s Sure Promises

“Knowing what to do when we don’t know what to do is really a matter of receiving personalized, customized revelation,” President Kusch said.

President Russell M. Nelson has invited everyone to study what spiritual work needs to be done to improve one’s ability to receive revelation from the Holy Ghost.

President Kusch suggested asking questions like “What am I doing, saying, watching, or listening to that might offend the Spirit?” or “What would Heavenly Father have me learn about diligence and patience?”

This is a world of instant messaging and instant answers, he said. However, “learning to trust God and understanding that many times there may not be insta-answers is vital in our journey through life.” 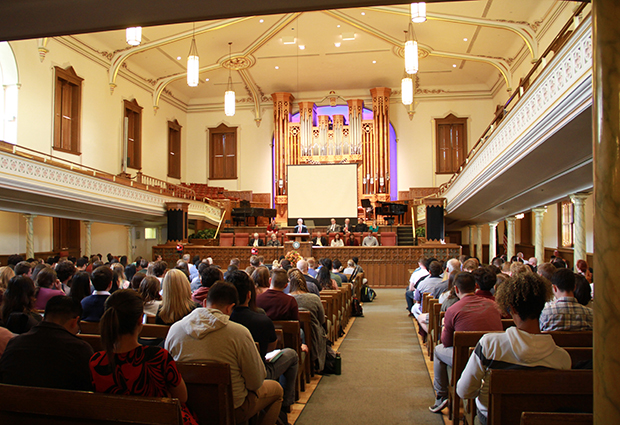 Early in the Kusches’ marriage, President Kusch was called to serve as bishop in the ward that he grew up in. But as a 26-year-old with three young children, he had just sold his home, with plans to move 50 miles away, so he wasn’t sure he could fulfill the call.

The stake president then promised them “that if we would stay and serve, the Lord would bless us, in His own time, to remedy the concerns we had about where to raise our family,” President Kusch said.

In that moment, he and his wife, Sister Alynda Kusch, knew that they would stay and serve.

They were miraculously able to cancel the transactions necessary to stay put, and while President Kusch didn’t serve long as bishop in this ward, “it was a sacred time for us and our family,” he said.

He then took the students back to his experience of the disastrous pre-test he related at the beginning of his address. After recovering from his failure, his efforts had been magnified as he’d relied on the five principles he shared.

“I was blessed with capacity to accomplish more in limited time than I ever thought possible,” President Kusch said. He said he was helped along the way by those who felt impressed to do so and became the third person in his cohort to finish and defend his dissertation.

“I testify, brothers and sisters, that God has not placed us on this earth to be left alone,” he said, adding that there will be many times when each person won’t know what to do, but they can still know what they need to do.

“Scriptures, prophets, temples, and the Holy Ghost are sacred tools and resources that will always help us know.” 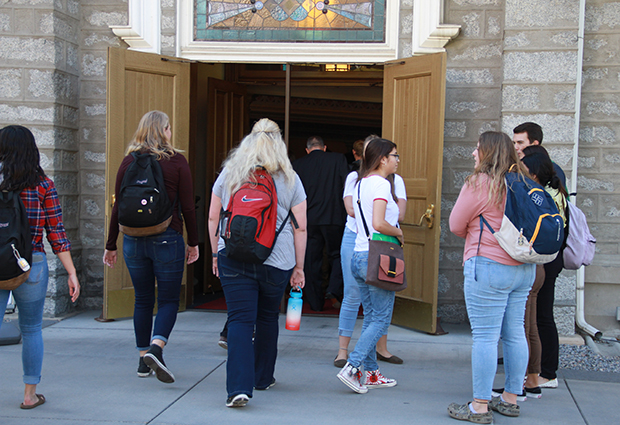 Students enter the Assembly Hall on Temple Square for an LDS Business College devotional on September 24, 2019. Photo by Valerie Johnson.