Make Technology Your Servant, Not Your Master, Elder Ballard Says 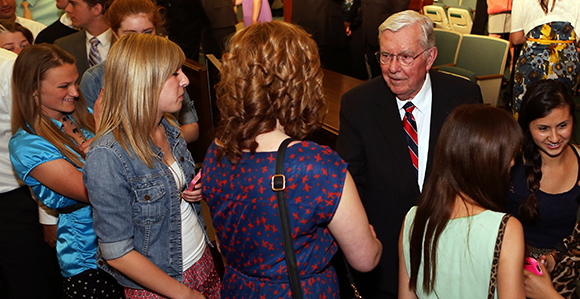 While heralding the advantages of today’s technology, Elder M. Russell Ballard urged young Latter-day Saints to not let its use interfere with their relationships with God or with family and friends.

Elder Ballard of the Quorum of the Twelve Apostles also gave strong warnings about the dangers of using pornography and reaffirmed the doctrine of the Church on marriage.

“It is important to be still and listen to and follow the Spirit,” he said. Using phrasing from Doctrine and Covenants 101:16, he added, “We all need time to ask ourselves questions or to have a regular personal interview with ourselves. We are often so busy and the world so loud that it is difficult to hear the heavenly words ‘Be still and know that I am God.’”

“I have heard that some people think the Church leaders live in a ‘bubble,’” Elder Ballard noted. “What they forget is that we are men and women of experience and we have lived our lives in so many places and worked with so many people from different backgrounds. Our current Church assignments literally take us around the globe, where we meet the political, religious, business, and humanitarian leaders of the world. Although we have visited the White House in Washington, D.C., and the leaders of nations throughout the world, we have also visited the most humble homes on earth, where we have met and ministered to the poor.”

Members of the Quorum of the Twelve Apostles each have strong personalities, he said, and when they are unified in a decision, they have arrived at it after much prayer and thoughtful discussion.

“We are young at heart, and the Lord blesses us to move His work forward in remarkable ways,” he said.

Elder Ballard referred to speeches he gave in 2007 and 2008 to graduating students at BYU–Hawaii and BYU–Idaho in which he urged them to use advances in technology to become involved in the worldwide conversation about the Church.

“I thought I was rather up to date when I suggested they share their views on blogs,” he said. “Since then, I have been introduced to Facebook, Twitter, Pinterest, YouTube, Google+, Instagram—and my secretary told me just as I was leaving something about Snapchat. Wow! It seems like the world of technology cannot stand still, even for a few minutes.”

Saying that today’s pervasive handheld devices such as smartphones are a blessing, he declared: “They need to be our servants, not our masters. For example, if later tonight you share inspiring thoughts from this devotional on social media, your smartphone is a servant. If you randomly surf the Internet, your smartphone is a master.”

He expressed concern about excessive text messaging and use of social media that supplant talking directly with one another and talking in prayer to God.

“Too often, young people find themselves in the same room with family or friends but are busily communicating with someone not present, thereby missing an opportunity to visit with those nearby,” he remarked.

“What I have learned most in my life came from listening to those with great experience, those who had lived longer and learned many important things that I needed to know. Please take advantage to visit and talk with your parents, aunts and uncles, and grandparents while they are still with you.”

He added, “I also worry that some of you check your email, Facebook, Twitter, or Instagram accounts or send text messages during the most important gathering in the restored Church of Jesus Christ of Latter-day Saints, our sacred sacrament meeting.”

Some parents and Church leaders are worried that young people carry their scriptures and other Church resources on their phones and tablets, he said, “but I am not.”

Young people are reading their scriptures as Jesus did when He was given an Isaiah scroll to read from in Nazareth, Elder Ballard observed. “You too can scroll—but please, not during the sacrament,” he said. “Surely during those few minutes you can focus on the Atonement of the Savior as you seek the Spirit of the Lord to bless you for the coming week. And consider putting your smartphone or tablet in airplane mode for the entire Sunday block. You will still have your scriptures, general conference talks, hymnbook, and manuals but will not be distracted by incoming text messages or push notifications.”

He said young Church members need to find a refuge from the storms of life and that one of the best refuges is the temple.

“In all the ordinances in the house of the Lord, you will hear beautiful language, words, and promises given by the Lord to His children. It is the only place you can hear those beautiful, inspiring words.”

For those who do not yet qualify for a temple recommend, he urged that they visit the temple grounds, noting that nothing prevents them or anyone else from doing so.

Elder Ballard compared the harmful effects of pornography to the harmful physical impacts of using substances prohibited in the Word of Wisdom.

“We don’t have to wait for 180 or even for 10 years to discover the devastating effects of pornography, because current scientific research has revealed that pornography cripples young adults in several ways and poisons their chances of one day having a loving and lasting marriage relationship,” he said.

Those effects include obsessive behaviors, unrealistic expectations, and misinformation about human intimacy, conditioning of the user to see people as objects to be disrespected, and “self-concealment” that hurts relationships and leaves one vulnerable to depression, poor self-esteem, and anxiety, he explained.

“My dear young friends, do not be deceived,” Elder Ballard warned. “If you are involved in it now, if you are entrapped in this practice, get spiritual help now. You can overcome pornography with the Savior’s assistance. Do not wait. I plead with you to leave it alone!” [Visit the Church's website overcomingpornography.org.]

Elder Ballard characterized the Apostles as being charged “to be watchmen on the towers to see and teach the doctrines of Christ,” and he applied that to the doctrine of marriage.

Traditional marriage is under attack today, with many framing the discussion in terms of civil rights, he observed. He then quoted from a recent letter sent to local leaders by the First Presidency which reads in part, “Changes in the civil law do not, indeed cannot, change the moral law that God has established. God expects us to uphold and keep His commandments regardless of divergent opinions or trends in society.” [See more about God's plan for marriage and families.]

“The Church does not teach or advocate shunning or other unchristian-like actions,” he declared. “We must love and strive to help others to understand that no one should ignore or discount the commandments of God.”

Elder Ballard acknowledged that some young Church members worry about being misjudged and ridiculed for standing up for the Church’s doctrines and values.

“My dear young friends, don’t worry about those in the large and spacious building,” he admonished. “Nephi saw that they would mock and point ‘their fingers towards those who had come at and were partaking of the fruit’ (1 Nephi 8:27). Don’t be like those who ‘after they had tasted of the fruit they were ashamed, because of those that were scoffing at them; and they fell away into forbidden paths and were lost’ (verse 28).

“You are a great and important generation, and this is a great time to be alive! The future is bright. Say to yourself, ‘I am helping the Lord as I reach out to share my testimony and to teach the truths God has revealed in the last days.’”

Elder M. Russell Ballard speaks at a CES devotional on Sunday, May 4. Photo by Jerry Wellman.