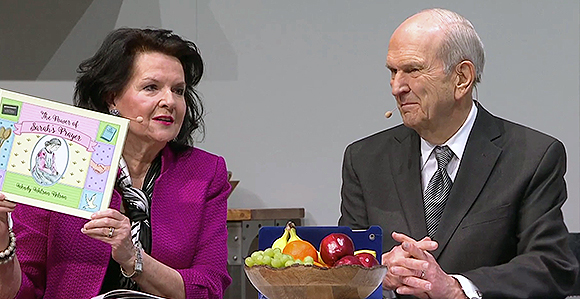 President Russell M. Nelson looks on as Sister Wendy Watson Nelson holds up a children’s book she created for her great-nieces and nephews about the conversion of their ancestor. Elder and Sister Nelson spoke together during Family Discovery Day February 11, 2017.

“I invite you to prayerfully consider what kind of sacrifice—and preferably a sacrifice of time—you can make to do more family history and temple work this year.” —President Russell M. Nelson, President of the Quorum of the Twelve Apostles

“I invite you to prayerfully consider what kind of sacrifice—and preferably a sacrifice of time—you can make to do more family history and temple work this year,” said President Nelson, President of the Quorum of the Twelve Apostles.

Sister Nelson also encouraged members to make a sacrifice of time to the Lord by increasing the time spent on temple and family history work. “And then watch what happens,” she said.

President and Sister Nelson spoke side-by-side at the annual family history event on Saturday, February 11. Family Discovery Day is held on the last day of the four-day RootsTech conference in Salt Lake City and is targeted toward helping Church members “discover and celebrate their family heritage—past, present, and future.”

President and Sister Nelson shared with their RootsTech audience a special game of Scrabble—one of their favorite games to play together—with words related to temple and family history work.

“It really is,” President Nelson agreed. “As the patriarch of this ever-growing family, I am so grateful that we have wonderful fathers and mothers who are busily engaged in righteous, intentional parenting.”

President and Sister Nelson listed some of the activities they do as a family to keep their relationships close, including a monthly family newsletter (the Nelson News); a monthly family gathering where they celebrate all that months’ birthdays and anniversaries; and even ski days in the winter season.

“What we do is less important than that we do something,” President Nelson commented. “Activities that make family life happy and memorable are an important part of righteous, intentional parenting.”

The family can be a place of safety and refuge as well as fun and happiness, added Sister Nelson.

She noted that because President Nelson and Sister Dantzel Nelson taught their children, “those little families are remarkably self-reliant, because they are reliant on the Lord. That has to be such a comfort to you,” she told her husband.

The next word the couple spelled on their Scrabble board—Elijah—explains why family is so important, President Nelson continued.

In speaking of hearts—the next word on the Scrabble board—Sister Nelson said that her husband recently helped turn the hearts of their children to their fathers by sharing copies of a journal entry of his grandfather A. C. Nelson with each member of their family.

The journal entry recounts the experience of A. C. Nelson being visited by his deceased father on April 6, 1891. The visit was in part to ensure that his children would be sealed to him. Amongst other counsel, A. C.’s father told him to “always cling to the Gospel. Be humble, be prayerful, be submissive to the Priesthood, be true, be faithful to the covenants you have made with God. Never do anything that will displease God. Oh, what a blessing is the Gospel! My son, be a good boy.”

“It is so precious to me that my grandfather would leave that record for us,” President Nelson said. “We learned that his children were subsequently sealed to him. So the reason for the visit was accomplished.” 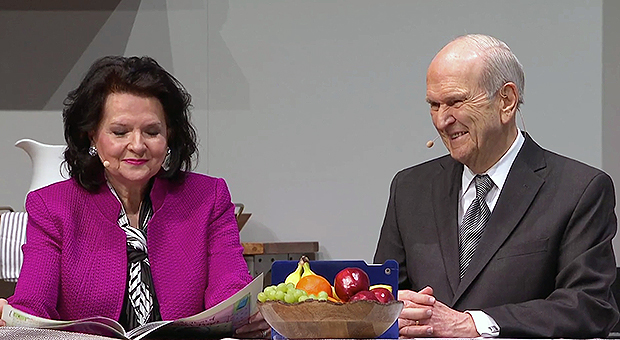 President Russell M. Nelson looks on as Sister Wendy Watson Nelson reads from a children’s book she created for her great-nieces and nephews about the conversion of their ancestor. President and Sister Nelson spoke together during Family Discovery Day February 11, 2017.

“It’s wonderful to turn the hearts of the children to their fathers by telling important family history stories in ways that are accessible and memorable,” said President Nelson. He then quoted King Benjamin from the Book of Mormon, who taught of the importance of keeping and preserving sacred things so that posterity could “have [them] always before our eyes” (Mosiah 1:5).

Placing family history documents, stories, photos, and memorabilia on the walls of homes, on computers, on iPads, and even on cell phones can remind individuals to make better choices and draw closer to the Lord and to families. “However, if we leave it at that level, we haven’t really done enough,” President Nelson said and added the next word to the Scrabble board—detours.

“If our collections of stories and photos should ever become an end point in themselves—if we know who our ancestors are and know marvelous things about them, but we leave them stranded on the other side without their ordinances, such diversion will not be of any help to our ancestors who remain confined in their spirit prison,” President Nelson declared. 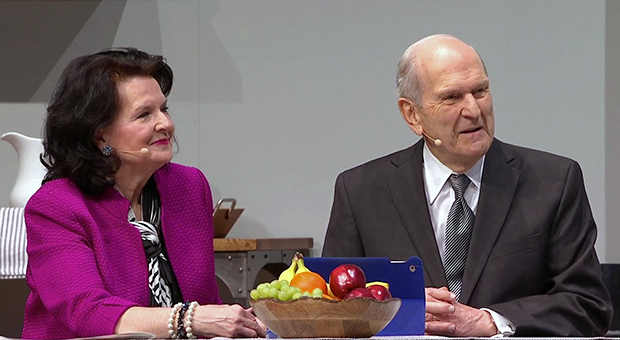 Which can mean sacrificing time normally spent on other activities, President Nelson added before spelling the next word—sacrifice.

Sister Nelson recalled last year’s RootsTech where she shared one of the sacrifices she made to make time for family history research. She committed to give up her personal Scrabble games for two weeks to invest that time into family history.

“That sacrifice changed my life,” Sister Nelson said. “Sacrifice does indeed bring forth the blessings of heaven. I was blessed to find so many ancestors who were desperate to make covenants with God and to receive their essential ordinances.”

Family history and temple work bring her joy, Sister Nelson said, before adding the word joy to their Scrabble board.

Family history can also play a major role in missionary work, President Nelson said and added the word missionary to the board.

“People have an inborn desire to know something about their ancestors, and that becomes a natural opportunity for our missionaries,” he said.

In speaking of the last word, sealing, President Nelson shared that he had the privilege of sealing all of his children to their spouses and most of his married grandchildren. “Exaltation is a family affair,” he said. “Only through the saving ordinances of the gospel of Jesus Christ can families be exalted.”

“Each class we attend, each time we serve, each covenant we make with God, each priesthood ordinance we receive, everything we do in the Church leads us to the holy temple—the house of the Lord,” Sister Nelson said.

“The ultimate end for which we strive is that we are happy as a family—endowed, sealed, and prepared for eternal life in the presence of God,” President Nelson added.

President Nelson explained that individuals choose every day where they want to live eternally by how they think, feel, speak, and act. “He wants us to choose to return to Him. He will not—He does not—force us in any way. The precision with which we keep our covenants shows Him just how much we want to return to live with Him.”

Just as the Primary song “Families Can Be Together Forever” states, “families can be together forever if members of the family have faith in Jesus Christ, repent, are baptized, receive the Holy Ghost, and receive other essential ordinances in the temples of the Lord,” Sister Nelson said.

She then bore her testimony that “however fabulous your life is right now, or however discouraging and heartbreaking it may be, your involvement in family history and temple work will make it better.”

President Nelson told the RootsTech audience: “Brothers and sisters, you and I can be inspired all day long about temple and family history experiences others have had, but until you and I do something to actually experience the joy for ourselves, our attendance here at RootsTech 2017 will have been something like a nice, warm bath. It feels so good at the time, and then it’s over.”