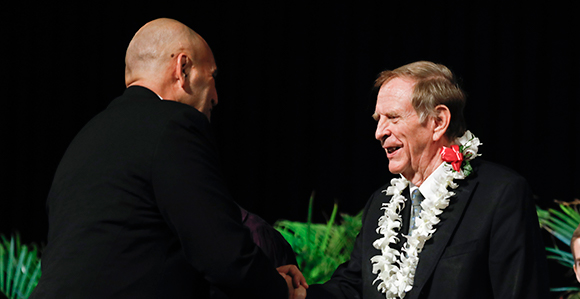 “Those who lose faith in Christ because they have lost faith in Joseph Smith have things backward,” said Richard Bushman, American historian and prominent author on the subject of Joseph Smith, during a devotional at Brigham Young University–Hawaii on November 15.

“Joseph’s mission was to increase faith in Christ, not in himself,” he said.

“This may surprise some Church members,” he said of the multiple accounts. “Not everyone has been aware of the existence of these other records and may be startled to discover that other versions exist.”

Sharing insights to how the other accounts came about, Brother Bushman asked listeners how the knowledge of multiple accounts affects understanding of Joseph Smith and the gospel.

“The discovery of nine versions of the First Vision is the result of work by historians. … The standard account found in Joseph Smith’s history of the Church is so rich and interesting that for many years we were content to rely on it alone,” he said.

As critics of Joseph Smith asked why the event was not recorded earlier than 1838, Church historians began to look for more accounts and references in the archives.

“And sure enough, one by one, other accounts began to turn up, one in 1835, another as early at 1832, and others scattered through his life,” Brother Bushman said. He later continued, “He wrote the first of these accounts in 1832 as a start on a history of the Church which he hoped to continue in a daily journal.”

“What more can we learn about the vision by looking at these various accounts more carefully?” he asked. “Each one naturally differs in detail from the others. They all talk about the Lord appearing and giving a message to Joseph, but they are like the gospels in the New Testament. Each one has a different emphasis and gives us a somewhat different view of the event.”

Brother Bushman spoke of the first account recorded in 1832. Recognizing it does not include every detail, Brother Bushman said he finds it “very appealing” because large parts of it were written by Joseph himself.

“It rolls forth in a rush of words, not well punctuated and not carefully organized, the kind of thing an untrained writer would produce when trying to get down his memories,” he said.

Brother Bushman pointed out that the 1832 account emphasizes worthiness and how Joseph was worried about his own soul. Another important part of the 1832 account is understanding the first thing the Savior did when He spoke to Joseph was forgive him and urged him to repent.

“The first act of the Restoration was to put the soul of the Lord’s prophet into order,” he said. “After granting forgiveness, Christ went on to remind Joseph of the Atonement. … To my way of thinking this account throws a new light on the Restoration.”

The emphasis on forgiveness is a theme found throughout Joseph’s life.

“To me that is what the 1832 account of the First Vision promises us—a God who will forgive us and lift the burden of sin from our backs.”

“It was buried away in Church records until discovered by a historian in the 1960s,” he said.

In 1839 the First Vision first appeared in print, and it wasn’t until 1842 that the familiar 1838 account was published.

Brother Bushman said the First Vision's “notable absence from Church writing until 1839 is quite surprising. … This puzzling absence moves us to ask: what was the message in that first decade? If Joseph Smith was not seeking to promote himself as a prophet, what was he promoting? What was the message if not a new prophet?”

The answer is found in the revelations of the time—he taught of the Savior and His Atonement.

“Sometimes this deep infusion of Christ into modern revelation does not achieve its purpose in people’s lives,” he said. “Some people’s faith is based more on Joseph Smith than on Jesus Christ. When they begin to question the prophet, they lose faith in the Savior.”

It is through holding on to Christ and making the Savior the foundation of faith that people will find their way, Brother Bushman taught.

“[Joseph] did not organize a church of Joseph Smith,” he said. “The Articles of Faith do not mention his name. They begin with the statement, ‘We believe in God, the Eternal Father, and in His Son, Jesus Christ, and in the Holy Ghost.’ That is the foundation. …

“His revelations pointed beyond himself to Christ and the Father. I believe in Joseph Smith as a prophet of God, and likely most of you here today do too. But we must place our faith first in Christ and believe in Him apart from our faith in His messenger. Christ should be the anchor when we struggle and question.” 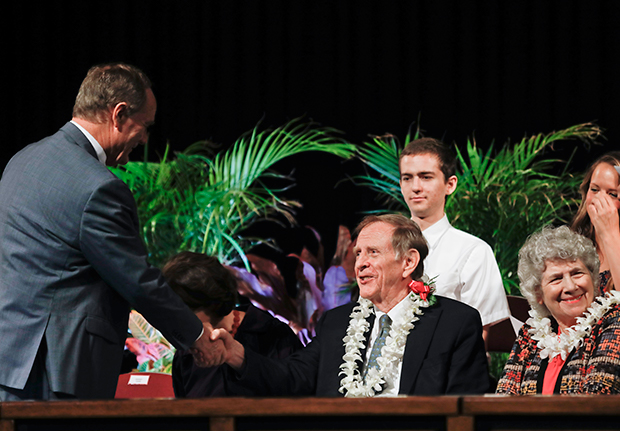