Make a Difference, Leigh Anne Tuohy of “The Blind Side” Tells RootsTech Attendees

Leigh Anne Tuohy takes the stage as the keynote speaker for the second day of RootsTech 2020 at the Salt Palace Convention Center in Salt Lake City, Utah, on February 27, 2020. Photo by Aubrey Eyre, Deseret News.

"It’s not hard. It’s giving of your time. You can save that one, you can make a difference to that one. The one name you find could be the difference made. Turn around. Make a difference.” —Leigh Anne Tuohy, RootsTech speaker

Taking the stage to kick off day two of the largest genealogy and family history conference in the world, Leigh Anne Tuohy shared with the RootsTech audience what she has learned about “the power of you—the power of one person.”

Tuohy’s story is a familiar one for anyone who has seen the Oscar-winning movie “The Blind Side,” which depicts her decision to take in and eventually adopt Michael Oher, who later became an offensive lineman in the NFL. And in real life, the petite mother of three is every bit as commanding in her presence as Sandra Bullock’s Hollywood portrayal of her.

Every person has a story, and although people and their stories can sometimes get lost in the shuffle of life, their stories matter, she said during her keynote address on Thursday, February 27.

Recounting the details of how a split-second decision led her to invite a stranger into her home and family, Tuohy emphasized the power that each individual has to make a difference in the lives of others.

For Tuohy, the decision to “turn around” her car and talk to a poorly dressed young man on the street changed her life. From that one decision, she gained another son, another member of her family, and a better understanding of the need to reach out and love others.

When it comes to family history and genealogy work, individuals who are reaching out to make connections with strangers and relatives across time and space are changing lives, Tuohy continued. In her own life, Tuohy said she had recently been blessed by DNA research and genealogy work when a cousin she never knew reached out to her.

“My whole life is taking a different course now,” she said.

By learning more about one’s history and heritage, individuals have the power to make sure their family doesn’t get left behind in history and that their story is given a chance to affect them and future generations. And like it did for her son Michael Oher, a chance can make all the difference.

Concluding her keynote speech, Tuohy left with one thought: Turn around and make a difference. 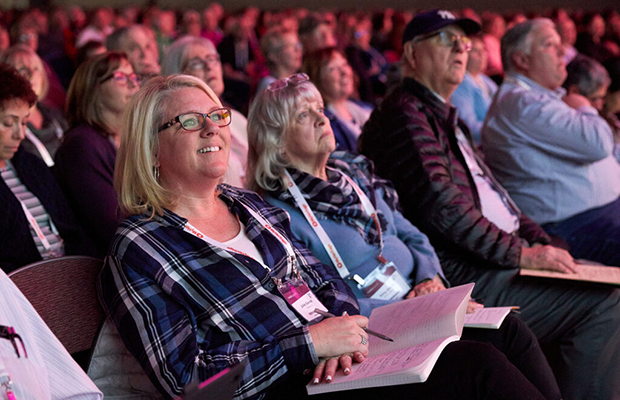 RootsTech attendees listen to a keynote address in the Salt Palace in Salt Lake City, Utah, on Wednesday, February 27.

A Look around This Year’s Expo Hall

At the expo hall—what many describe as the “heartbeat” of RootsTech—were a variety of exhibits, booths, and vendors for attendees to find resources for areas of interest. The hall featured opportunities to learn, watch demonstrations, and interact with new technology.

New to the expo hall in 2020 was a virtual reality experience in which participants could virtually visit their homelands using Google Street View. A virtual reality headset was placed over a user’s head, and he or she could “walk around” any location using handheld controllers.

A RootsTech attendee tries out the virtual reality homeland experience in the expo hall on Thursday, February 27. Photo by Sydney Walker.

Jay Lambert, a first-time RootsTech attendee from Scottsdale, Arizona, spent a few minutes walking through Leige, Belgium, where his Lambert line comes from.

“I walked next to the river that runs through the middle of the city and by buildings,” he said. “It was really neat to see where my ancestors probably walked.”

The virtual reality experience gave Lambert a desire to learn more. “I’d like to learn exactly where the Lambert family lived and go see the church where they were baptized,” he said. “I don’t think I will be able to go there anytime soon, so it was a good way to be there.”

“Everybody should try it,” he added. 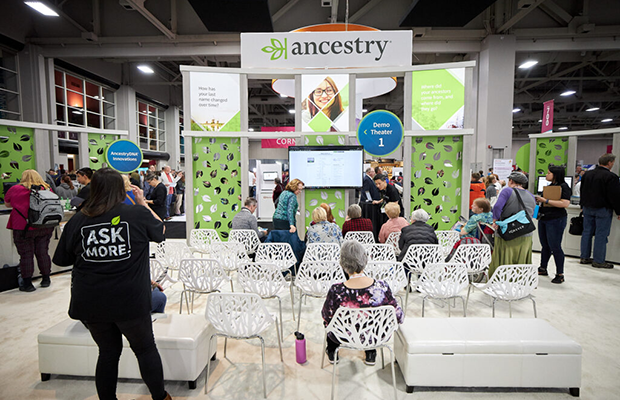 RootsTech attendees take their seats for a demonstration at the Ancestry booth in the expo hall in the Salt Palace on Wednesday, February 27.

Also new this year, RootsTech attendees could watch exclusive prerecorded workshops in the Cyber Café. A classroom was also added to the expo hall this year, with classes beginning at 1:30 p.m.

Another highlight of the expo hall was the Heirloom Show and Tell, where people could bring their family artifacts and get information from expert historians on the value of their items.

“We do this to try to get people to remember at home what they have,” said collector Glen Beckstead. “We help them understand what they have, what is of value, and what year it was.”

Among the items displayed were coins, toys, spoons, and Latter-day Saint memorabilia. People could bring their own items to display.

“This is all history,” Beckstead said. “You can tell something about your grandpa or grandma by what they collected.”

One of the most popular areas of the expo hall was the DNA Basics Learning Center. A new activity called “JellyGenes” likened DNA to a mix of jelly beans. Participants pressed a button, and a machine randomized a handful of jelly beans—similar to how an individual gets a variety of DNA from their ancestors. Several DNA classes of all skill levels were offered at RootsTech this year.

Many attendees also visited the Demo Theater, where they could take a seat and relax on a comfy couch and listen to vendors demonstrate family history-related technology. A new vendor presented every 15 minutes.

Those looking for personal help with family history could visit the Coaches’ Corner to meet one-on-one with a research specialist. 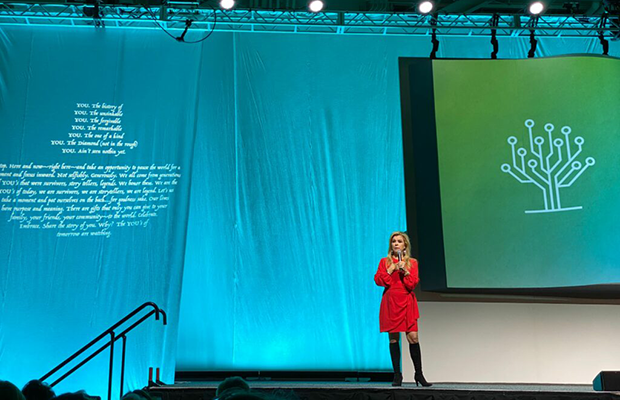 Leigh Anne Tuohy takes the stage as the keynote speaker for the second day of RootsTech 2020 at the Salt Palace Convention Center in Salt Lake City, Utah, on February 27, 2020. Photo by Aubrey Eyre, Deseret News. 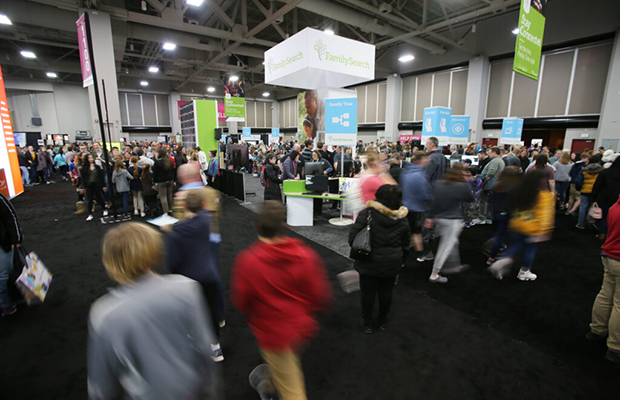