Looking Back: Powerful Testimony on “Peninsula of Sorrow” 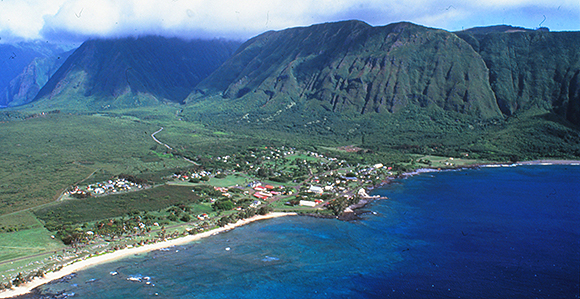 The Kalaupapa settlement, established in 1866 for victims of leprosy, is on a peninsula backed by steep cliffs and bounded on three sides by the Pacific Ocean. Photo by Patrick McFeeley.

For several years, the Church News has published stories about memorable Christmases. As I write about one of mine, I’m not delving into my memory bank and withdrawing something from my childhood or youth. Instead, I’m writing about some remarkable people I met while on an assignment to Hawaii in 1996 and the lesson they taught me about how the Lord has blessed us.

On Sunday, December 2, I visited the island of Molokai and attended meetings in a little LDS chapel in a beautiful setting at Kalaupapa, a settlement initially established for people who had leprosy, or Hansen’s disease. In past generations, several hundred Mormons lived there, but by the time I visited, membership had dwindled to three: Kuueli Bell, Lucy Kaona, and Peter Keola. The last of them, Sister Kaona, died in 2011. With no Mormons left at Kalaupapa, the chapel stands empty.

A brief history of the settlement

In 1865, Hawaii’s King Kamehameha V signed the Act to Prevent the Spread of Leprosy. A peninsula on Molokai was designated as a place of settlement for those who had contracted the disease.

On January 6, 1866, the first patients were sent to a settlement at Kalawao, a short distance from the current settlement at Kalaupapa. Sister Bell told me the banished people were treated inhumanely. As there was no dock, the patients entered the settlement by jumping overboard from the ships that sailed them to the remote peninsula. Those reluctant to jump were pushed.

“If they could not swim, they drowned,” Sister Bell said. “People were sent here to die. This was a living tomb.”

Bordered on three sides by the ocean and on one side by cliffs ranging up to 3,000 feet, the peninsula was an open-air prison. Patients had no way to leave. Some 8,000 people—including hundreds of Latter-day Saints—were sent to the peninsula over the years.

Because of medical advancements, the isolation law was repealed in 1969. Even though no new patients were sent to Kalaupapa, no new residents were allowed to move in.

Several residents chose to stay; Kalaupapa was the only home they’d ever known. Since no children under 16 were permitted to live there, in its later years Kalaupapa became a dying settlement. It gained national historical park status on December 22, 1980.

“This was a terrible place to come to in the old days,” Sister Bell told me. However, by the time I visited, it was a beautiful settlement featuring comfortable homes, a hospital, and a store, among other amenities.

So, what does my visit to Kalaupapa have to do with Christmas memories? Quite a bit. Foremost, it allowed me to see firsthand how followers of Jesus Christ ministered to three isolated Latter-day Saints by literally going the extra mile.

Every Sunday, two or three—or more—Melchizedek Priesthood brethren from Molokai’s Hoolehua Ward made a three-and-a-half-mile trek down a steep mountain trail to preside over humble meetings, administer the sacrament, teach Sunday School lessons, and, when requested, give blessings for comfort and healing. The day I was there, Bishop Leonard Elia and two full-time missionaries made the trip down and back up the trail.

Bishop Elia said old-timers told him it didn’t seem natural to live in a place with no children.

“Our children were taken from us,” Sister Bell explained. “We had no contact with them. None. … My mother took my children, and … Lucy’s family took hers. My mother brought my children to the receiving station so I could see them … through a glass partition.”

Meetings on the day I visited resonated with the Savior’s declaration, “For where two or three are gathered together in my name, there am I in the midst of them” (Matthew 18:20) and with one of His Book of Mormon prophet’s eloquent pronouncements, “When ye are in the service of your fellow beings ye are only in the service of your God” (Mosiah 2:17).

We sang Christmas hymns, including “Silent Night.” I wondered what Sister Bell and Sister Kaona thought as they sang about a mother and her baby—a woman who, eventually, would have her son taken from her.

The spirit of the sacrament meeting that day coalesced in the testimony expressed by Sister Kaona. Her face and other parts of her body bore evidence of the ravages of the disease known as the scourge of all ages, which ancient Egyptians called “death before death.”

With a sweetness in her halting voice, Sister Kaona declared: “I know that Heavenly Father loves me because He has been so good to me.”

A couple of years later, I sent Christmas cards in which I wrote about that December morning and Sister Kaona’s testimony about a loving Heavenly Father sending His Son to bless all the world through His atoning sacrifice and His restored gospel. 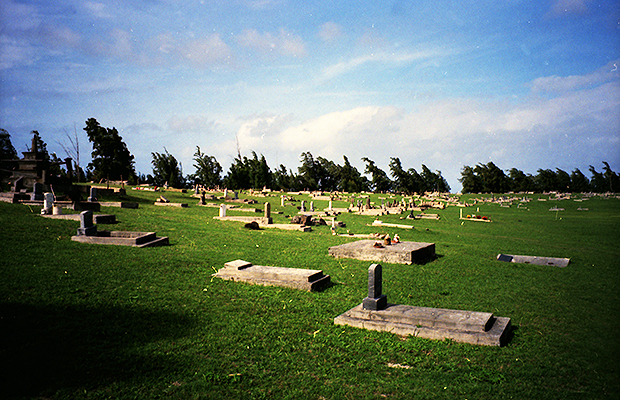 Over the years, hundreds of Latter-day Saints were sent Kalaupapa, a leprosy colony on a peninsula of the Hawaiian island of Molokai. Photo is of the LDS cemetery, one of many graveyards on the peninsula. Photo by Gerry Avant.