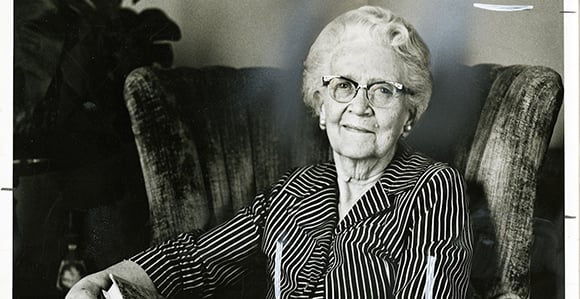 Sister Ida Jensen Romney, wife of President Marion G. Romney of the First Presidency, in 1974. Sister Romney was a faithful woman whose testimony shone through in her life.

After I wrote about Sister Camilla Eyring Kimball, I began thinking about other women of faith I’ve met during my career at the Church News. One of them was Ida Jensen Romney, wife of President Marion G. Romney, who was then a counselor in the First Presidency. (He had been a General Authority since 1941; he died in 1988.)

I interviewed Sister Romney in their home in preparation for a feature article about her that was published on January 16, 1974.

She reviewed a time when she had to know for herself that Joseph Smith was a true prophet of God. As a member of a stake Sunday School board, she was assigned to teach the teachers in the stake. Although she didn’t have a college degree, she had a teaching certificate.

“One man was a graduate of the University of Idaho,” she said. “His wife (who was not a member of the Church) was also a college graduate. She attended the meetings with her husband.

“It never bothered me to have her in the class until one day our lesson was about Joseph Smith’s First Vision. I was preparing it, and I thought about this woman.

“‘She’s an educated woman,’ I thought to myself. ‘She’s going to think I’m crazy when I tell this story.’”

Feeling discouraged over the lesson’s preparation, she went downstairs to talk with her mother, explaining that she wouldn’t be able to give that lesson. “I don’t know that it’s true,” she tearfully told her mother.

Her mother replied, “You do too! You’ve been taught it all your life, and you’ve taught it in other classes. I’ve heard you bear your testimony that you know it’s true.”

Sister Romney said that she quietly replied, “Yes, but I still don’t know it.”

Relating that incident, Sister Romney said that her mother counseled her, saying, “My dear, what did Joseph Smith do when he had to know which was the right church? I suggest you follow his example.”

“I’ll never forget that,” Sister Romney said. “I went upstairs, needing to know that Joseph Smith was a prophet. I pleaded with the Lord; I told Him I had to know that this was true for myself, or I couldn’t give the lesson.“

“I went to the meeting that Sunday,” Sister Romney said as she reflected on that long-ago quest for a testimony. “When I gave that lesson, I looked at that woman. I knew I didn’t have to just say words; I didn’t have to just repeat what I’d been taught. This time, I knew. It has been a great strength to me all my life.”

Grateful for that personal knowledge, Sister Romney drew upon her testimony to help others as she made gospel living a part of her daily life.

She was a support to her husband throughout their life together. They were married on September 12, 1924.

“I was so in love—so was he,” she said. “We didn’t have anything; that is, we didn’t have any money at all. I had been teaching while he had gone on his mission before we were married, and I had saved some money, but I didn’t dare tell him I had it. He was very independent. I could have taught school in Salt Lake City, where we lived, but he didn’t want me to. He wanted to make it on his own.”

She said attending productions at the Salt Lake Theater was their chief amusement. “Sometimes we couldn’t afford two tickets,” she said. “I remember one play we attended. I was in the dress circle, and he was in [a less expensive seat] in the balcony. We didn’t even get to sit together, but we communicated by looking at each other.”

Sister Romney often read books and magazine articles, looking for something she felt would interest President Romney. In the evenings, she would read an article or relate a book review to him. “He doesn’t have time to read as widely as he’d like,” she told me. “Finding those interesting things to share with him is one of my chief enjoyments, and he appreciates it too.”

She said she delighted in simple acts of love and kindness, displaying the philosophy that a lot of money doesn’t have to be spent to express love and concern, but that taking time to express appreciation or to offer encouragement is important.

Serving as a visiting teacher, she said, was a choice calling. She said she was recovering from a stroke when her ward’s Relief Society president visited. “I’ll never forget the day when ... she came in and said, ‘Sister Romney, we think you’re well enough to take a job.’ She said they wanted me to be a visiting teacher. I started to cry. I said that this was the most thrilling job I had been called to.”

With all the responsibilities she had as a General Authority’s wife, she felt a sense of humor was essential to maintaining a youthful attitude. She said she and President Romney laughed a lot together. “We were at the breakfast table the other day, laughing about something he had said. ... He tries to bring something cheerful home. We laugh and enjoy each other. That’s our dessert in life.”