Looking Back: A Glimpse of Life “after Hours” with President Thomas S. Monson 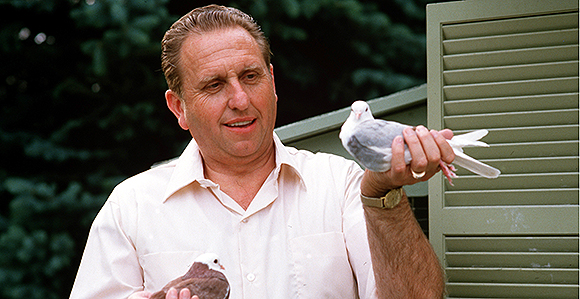 During an interview for a Church News article for the week beginning June 23, 1985, President Thomas S. Monson showed off a couple of his Birmingham roller pigeons.

On a June afternoon in 1985, Deseret News photographer Ravell Call and I went to the home of President Thomas S. Monson to take photos for an article I was writing about him.

I had visited President Monson and his wife, Sister Frances Johnson Monson, in their home before and, over the years, returned for more visits. However, the visit on that June afternoon stands out in my memory. It gave me a glimpse into the life of an Apostle “after hours,” when he had changed out of his suit and tie and put on more casual clothes to relax at home.

I had done much of the interview with President Monson before Ravell and I went to his home. He had told me about some of his boyhood interests and adventures, college life, meeting his future wife, service in the U.S. Navy, and early married life.

He talked about his call, at age 22, as a bishop in Salt Lake City. I began my article this way:

“On a cold December evening in 1950, Bishop Thomas Spencer Monson, 23, trudged blustery sidewalks to houses, apartments, and cottages in his ward. Slightly more than 1,000 members were under his stewardship in the Sixth-Seventh Ward, nearly twice the number in a typical ward today. Among them were 85 widows, to whom the young bishop had determined to make personal visits during the Christmas season, even though to do so he had to take vacation time from his work in the advertising department of the Deseret News.

“He took each widow a small gift, a symbol that she was not forgotten. But more important than gifts was the strong handshake the 6-foot-3-inch bishop extended and the warm, tender clasp that told each widow that if she ever needed someone, he would be there.”

Over the years, the Sixth-Seventh Ward meetinghouse was torn down, and death pared his list of widows’ names from 84 to four at the time I spoke with President Monson, but he still had the heart of a bishop. He visited those four remaining widows until their deaths and added other widows to his list to visit.

To aid and comfort the sick and lonely, the homebound and hospitalized, he visited them, sometimes during night’s lonely hours after having returned to Salt Lake City from across the world on a Church assignment.

His life was comprised of freewill giving. As a youngster, he was tall, thin, and not particularly athletic. He told me about the pangs of disappointment and embarrassment when he was always the last chosen for the softball team.

“When I was 14, I was playing center field and the local hero hit what would have been a home run. When the ball came toward me, I was sure I would miss it, but I caught it,” President Monson related as he slapped his right fist into the palm of his left hand in imitation of a ball settling into a mitt. “Catching that ball gave me a major confidence. I became rather adept and proficient at softball, and I became the first chosen.”

Instead of basking in his new popularity on the field, he looked at another boy who became the last chosen for the team. “From my mother and father I learned this caring and sensitivity,” he said. “It became my opportunity to help the other boy who was chosen last to move up the ladder and develop his skills.”

Before Ravell and I left, President Monson talked about some of his hobbies. One was fishing; he dug out some of his gear and showed us a collection of hand-tied flies, some gifts from friends or casual acquaintances.

“Come outside. I’ll show you my other hobby,” he said. We went out to the backyard where he kept hens in one coop and pigeons in another. He asked if we had ever seen Birmingham rollers, performing birds that spin over backward in the air. He had won state and national trophies with his pigeons.

I told him I’d never seen Birmingham rollers. The day was approaching dusk; the birds had already gone to roost. He opened the coop, tapped gently on its side, and shooed the pigeons out. They took to the air, did several rolls, and promptly returned to roost.

I look back on that moment 33 years ago and am struck by the unique experience of having an Apostle—a future Church President—share a few moments of his casual at-home time with a newspaper reporter and photographer.