London Chapel Renovation, Rededication Extend the Gospel to Many 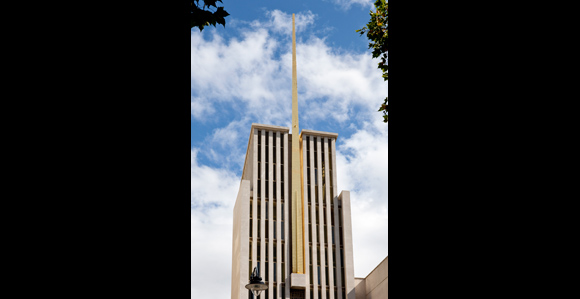 The steeple rises above the newly renovated and rededicated Hyde Park Chapel in London, England.

“The Hyde Park Chapel … has become more than a meeting place for the Saints. It is a beacon to the world for all of those that visit the beautiful city of London. … What really will fill it with life is your and my determination to open our mouths and send the message of joy that we feel; we have to send it out to the world.” —Elder Erich W. Kopischke, President of the Europe Area

The Hyde Park building, in the heart of London, will be a beacon of light, hope, and truth for people from all over the world. That was the powerful message during rededication services for the British capital’s most prominent Latter-day Saint meetinghouse, which has been renovated.

Elder Erich W. Kopischke, President of the Europe Area, who presided at the meeting, said, “My hope is that ... literally hundreds of thousands of people over the years will come into the building, and that this building will have a kind of an attraction to the people to learn more.”

His vision, he said, is “that we can create a spirit that will attract people here” so that “people will learn, as it says in the scriptures, about the gospel of Jesus Christ. … This is going to be one way that the gospel is going to be preached all over the world.”

While rededicating the building, Elder Kopischke said that “the elect will be attracted to come here and receive [the Lord’s] word, [His] hope, and [His] salvation ... that all people who shall enter upon the threshold of this building will feel [His] power and feel constrained to acknowledge that [He] hast sanctified and accepted it.”

Alan T. Phillips, president of the London England Hyde Park Stake, addressed the congregation and referred to the events leading up to the historic rededication as “steps,” noting they were not merely coincidence.

“For me it is not a coincidence that this road is being pedestrianized, ...” he said. “It is not a coincidence that the museums have opened up, that local government is literally forcing the 12 million visitors to come up above ground or, scripturally perhaps, ‘to arise’ and to walk this street, the very street whereby a site was acquired and a building was built whereby they pass it now.”

Although more than 50 years have passed since the first dedication of the Hyde Park Chapel, President Phillips noted, “The message was the same as it was five decades ago: God the Father lives. His Son, Jesus Christ, is the Savior and Redeemer of mankind. His gospel has been restored, in its fulness. In and through Him, all mankind may find ‘peace in this world, and eternal life in the world to come’ (D&C 59:23).”

July 1 marked the exact day, 175 years ago, that Elder Heber C. Kimball and others set sail to preach the gospel of Jesus Christ in England. President Phillips wondered, “What was occurring in the hearts of these men at that time? There must have been some anxiety about leaving family and loved ones behind, but there must have been some excitement as well as anticipation of the mission upon which they had been sent and a fervor within them that truth will prevail.” He added, “Today we have over 14 million members—nearly 200,000 in this land meeting in 332 congregations, two temples in this land, and 138 around the world, with others in construction.”

The Hyde Park building houses a new interactive visitors’ center on the ground floor, including a display with personal stories from the “I’m a Mormon” campaign. The center is located in one of the United Kingdom’s most popular tourist areas, which attracts more than 11 million visits a year.

Visitors to the Hyde Park Chapel, as well as passersby, are greeted with a new addition to the building — a statue inspired by Thorvaldsen’s Christus. This powerful depiction of the Savior gives a welcoming feel to the newly refurbished space and plays a pivotal role in inviting people into the new visitors’ center.

Elder Kopischke, in his address to the congregation, spoke of changes made to the building.

“The Hyde Park Chapel, as it is designed and situated today, has become more than a meeting place for the Saints,” he said. “It is a beacon to the world for all of those that visit the beautiful city of London, and as a fulfilling of prophecy, it is meeting the purposes of the Lord.

“The building is only part of it. What really will fill it with life is your and my determination to open our mouths and send the message of joy that we feel; we have to send it out to the world.”

Elder Arthur Brooks, the new director of the visitors’ center, said, “One day people will ask directions to the Science Museum and they will be told, ‘It’s right across from the Hyde Park Visitors’ Center,’ because it will be so popular here.” He went on to say, “We’ve seen virtual miracles happen. When the promises are given, we not only listen to them but we believe them. When the Lord’s servant says something is going to happen, it will.”

The Church bought the land for the Hyde Park building when not a single member lived within a seven-mile radius; the site had been empty since being bombed in World War II. In 1954 Clifton Kerr, president of the British Mission, received directions from President McKay to find property for a chapel in the center of London where “we can take anybody, regardless of their situation in life.”

Prominent British architect Sir Thomas P. Bennett, CBE, was appointed to the project in April 1959. He had earlier been the consulting architect for the London England Temple in Newchapel, Surrey, which was completed in 1958.

More than half a century following its initial construction, the chapel is now center for the London England Hyde Park Stake, which comprises seven wards and 2,000 members from 115 countries.

Hyde Park Ward is the English-speaking family congregation; Britannia is a ward for young single adults; and South Kensington Branch is the Portuguese-speaking congregation. Among the three units, some 600 people attend Sunday meetings in the Hyde Park building.

Since its establishment, the Hyde Park Chapel has played an important role in the lives of Church members within the United Kingdom and abroad. It is widely regarded as one of the most well known meetinghouses within the Latter-day Saint community, largely because of the diversity of members who flock to London from all over the world.

“There are a growing number of members of the Church in London actively involved in government (national and local), the voluntary sector, entertainment, and the arts,” he said. “Using their time and talents in such a way is something that touches and blesses the lives of many.”