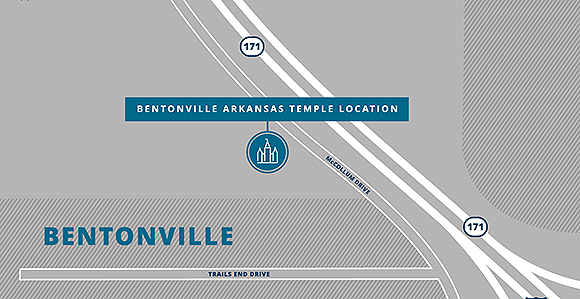 The Bentonville Arkansas Temple will be built on an 8.8-acre site located at 1101 McCollum Road. The temple will share the site with an existing meetinghouse.

Church leaders announced the location of the Bentonville Arkansas Temple on Thursday, April 23.

The state’s first temple will be built on an 8.8-acre site located at 1101 McCollum Road and share the site with an existing meetinghouse, according to Newsroom. Plans call for a single-story temple of approximately 25,000 square feet with a center spire.

“It is hard to feel anything but gratitude for the Lord for this tender mercy,” Bentonville Arkansas Stake president Simon F. Keogh told the Church News after the temple was announced.

“Having a temple of the Lord in Bentonville will be a tremendous blessing to the entire community, which is largely a dominantly Christian community full of good people,” he said. “Now they’ll have a beacon and a symbol of Christ’s love and a symbol of the Restoration that will help them come to a greater and truer knowledge of who He is and the blessings He has available for them.”

Interior and exterior renderings and the groundbreaking date for the temple will be released at a later date.

More than 31,000 Latter-day Saints in approximately 70 congregations reside in Arkansas.