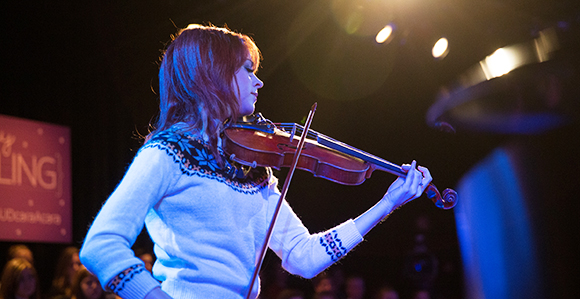 “The Lord’s given me a platform to stand on and an audience that is listening. I feel like it’s so important to share what makes me happy.” —Lindsey Stirling, LDS entertainer

Lindsey Stirling can typically be seen in eccentric costumes dancing on international stages and in YouTube videos while playing her violin remixes to a dubstep beat.

The popular LDS artist took some time out November 25 to sit down with Young Men and Young Women general presidents David L. Beck and Bonnie L. Oscarson to chat with youth around the world online and in the studio audience.

The second of four live Face to Face Facebook youth events sponsored by the Church was broadcast live on the Youth Activities website and LDS Youth Facebook page, as well as the Mormon Channel on YouTube.

Stirling, who recently returned from a world tour in Europe and has been traveling on the road for several months, said she decided to take this time to be with the youth because “I have been so incredibly blessed, and I just feel like my calling is to be a missionary and share the gospel. … The Lord’s given me a platform to stand on and an audience that is listening. I feel like it’s so important to share what makes me happy.”

The world-famous violinist started the evening by playing her hit song “Crystallize,” which has over 100 million views on YouTube. Then she answered questions from youth on modesty, her mission, self-worth, and finding balance in her busy life that poured in from social media outlets throughout the globe.

Justin from New Mexico asked Stirling where she gets the inspiration for her compositions. “I draw inspiration from my life, and, honestly, a lot of my religious beliefs have stemmed into my music,” she said, adding that she prays before she goes into the recording studio. “God has directed me. He has given me inspiration in the past, and He’s never just going to leave us alone,” she said.

A youth from Italy asked what Stirling’s favorite scripture was, to which she responded, Proverbs 3:5-6, “Trust in the Lord with all thine heart; and lean not unto thine own understanding. In all thy ways acknowledge him, and he shall direct thy paths.”

Stirling, a returned missionary who served in the New York New York North Mission, said that she had almost no success the first six months of her mission and that this scripture helped her through that time.

Stirling also opened up about her struggle with an eating disorder and how she learned that her feelings of self-worth had to come from inside her. “It really is ironic that the saddest I’d ever been was when I had ‘achieved’ all the things I had wanted. I was so disgustingly thin, but I was so unhappy.”

She eventually realized that she was not alone because of the Savior’s Atonement. “It’s amazing when it sinks into your heart and you feel those arms wrap around you of love and you know that somebody understands exactly your pain and [that] He knows you can make it through it,” she said.

A man from the UK who is not LDS asked Lindsey how her religion and beliefs help her through day-to-day life. “It makes me happy!” Lindsey said. “It’s amazing that the simple things of living the gospel makes you happy.”

It is important to stand as a witness of Christ, she said. “The Savior was rejected when He lived on this earth, and He’s still rejected today. I think that is why it’s such a beautiful thing that each one of us has the opportunity to shine. It is so cool to be able to stand as a witness of Christ and to be able to be proud of it and be part of His army.”

In addition to “Crystallize,” Lindsey played the title song from her newest album, Shatter Me, and performed an arrangement by Kendra Lowe of “I Know That My Redeemer Lives” with 12-year-old special guest Lexi Walker.

After the live event, Lindsey admitted, “I was actually really nervous for [the Face to Face event], more so than just performing or just doing my art. It takes more courage I think to stand up and say what you believe in and who you are, especially because I invited my fans to it. … It’s a lot harder to come out and make yourself vulnerable in that way.”