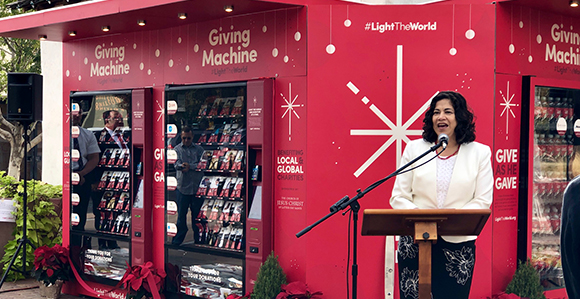 Sister Reyna I. Aburto, Second Counselor in the Relief Society General Presidency, speaks to a group of media and local leaders during the ribbon-cutting ceremony for the #LightTheWorld giving machines, which opened in Gilbert, Arizona, on Thursday, November 29.

“Jesus Christ is the Light of the world, and when we help others, we are sharing His light with the people around us.” —Sister Reyna I. Aburto of the Relief Society General Presidency

Sunny Arizona got a little brighter this holiday season.

On Thursday, November 29, in a square in downtown Gilbert, #LightTheWorld giving machines became available to the public, offering users the chance to make charitable donations for items such as diapers, turkeys, or toys. A ribbon-cutting ceremony, attended by Sister Reyna I. Aburto, Second Counselor in the Relief Society General Presidency; Gilbert Mayor Jenn Daniels; and representatives from other nonprofit organizations kicked off the giving.

“Isn’t that wonderful?” Sister Aburto asked, when noting that Gilbert is one of only five locations the machines are available throughout the world. Other machines are located in Salt Lake City, Utah; New York, New York; London, England; and Manila, Philippines.

Gilbert is located in the southeast part of the Phoenix metro area and is home to about a quarter of a million people.

The Gilbert Arizona Temple opened four years ago, and this fast-growing town is adjacent to Mesa—Arizona’s third-largest city—and other growing municipalities of Chandler and Queen Creek.

Donations to the giving machine will benefit global as well as local nonprofit organizations, including four in Arizona—A New Leaf, Helen’s Hope Chest, St. Mary’s Food Bank Alliance, and United Food Bank. The machines will be available throughout the Christmas season.

“Each giving machine will offer much-needed items for purchase from a variety of local and global charity partners,” Sister Aburto said. “All donations will be accounted for by the vending machines with the exact amount purchased going to each charity. One hundred percent of all donations will be used for the purchased items as determined by the applicable charitable organization. The administrative expenses will be covered by The Church of Jesus Christ of Latter-day Saints.”

“As we participate in this campaign, as we serve each other this season, and as we buy something from these amazing machines, we realize there is joy in giving,” Sister Aburto said. “Every season is a perfect season to give, not only during this time but throughout the year.”

She added, “Jesus Christ is the Light of the world, and when we help others, we are sharing His light with the people around us.”

Joe Dulin, chief philanthropy officer with A New Leaf, said the Church has been an “incredible support system” for his organization that shelters homeless and domestic violence victims while offering a variety of other services to those in need in the community.

“To be a part of it this year is just great,” he said. “I love the idea that there are items here from a pair of socks for a homeless person to airfare to reunite a refugee child with their family and everything in between. It is very meaningful.”

Dave Richins, a member of the Church in Mesa and president and CEO of United Food Bank, said he thinks Gilbert is a great location for anyone in the Phoenix area and believes people will seek it out for the opportunity to donate.

“I think it opens up other avenues of giving for our community members,” he said.

Cheryl Blinston of Queen Creek brought her 15-year-old son, Sam, to attend the event and make a donation.

“I’m so excited it’s in Gilbert,” she said. “There’s a large, giving community here—not just the LDS community, but the community at large.”

Sister Power, a full-time missionary in the Gilbert Mission, greeted visitors at the machines.

“There’s something for everyone,” she said. “It’s a simple way to give as Christ would give.”

Missionaries will be assisting visitors during the day, and local volunteers will provide security to the outdoor machines at night. 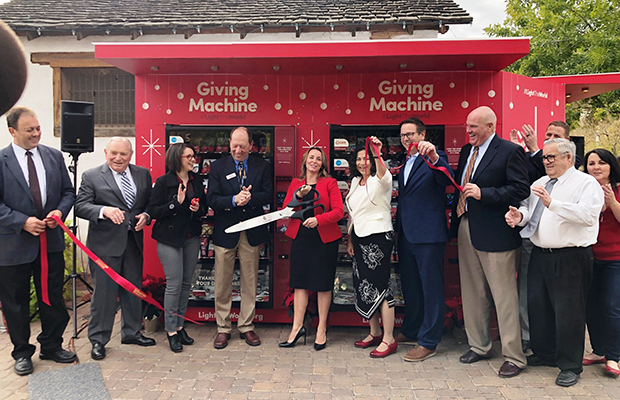 Gilbert Mayor Jenn Daniels cuts the ribbon for the opening of the giving machines on Thursday, November 29, 2018, accompanied by Sister Reyna Aburto and leaders of local nonprofits that will benefit from donations made in Gilbert, Arizona. Photo by Jill Adair. 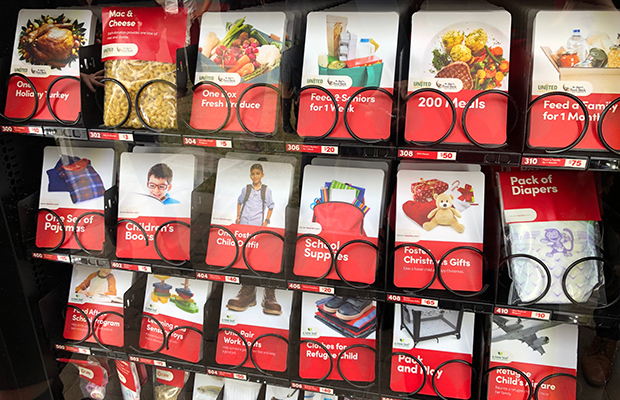 The giving machines, which opened in Gilbert, Arizona, on Thursday, November 29, offer items ranging from $3 and up. Photo by Jill Adair.