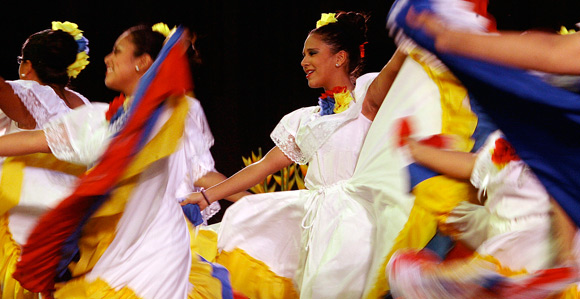 Dancers participate in the final dress rehearsal for the LDS program “Luz de las Naciones” (Light of the Nations) at the LDS Conference Center.

“Ours is truly an international Church. Our members can be found in nearly every nation and represent many diverse cultures and backgrounds. Here in Utah, the Church recognizes and appreciates the great diversity found in the community.” —Elder L. Whitney Clayton of the Presidency of the Seventy

Fili Sagapolutele is a busy man—a local attorney with a heavy caseload and plenty of professional and family obligations.

But when the Lehi resident was asked earlier this year to help choreograph the Samoan and Hawaiian dances for this weekend's Church cultural program, he eagerly accepted.

“It's been a big time commitment—but what better way to serve than to share your talents?” he said.

Brother Sagapolutele is just one of about 1,500 Utahns who were involved in the production of “Luz de las Naciones: Sus Promesas” (in English “Light of the Nations: Your Promises”). It's a colorful, festive program of song and dance that was staged Friday and Saturday night, October 26 and 27, in the Conference Center.

The cast included hundreds of volunteers from across the state performing songs, dances, and instrumental numbers from a variety of Latino and Polynesian cultures and traditions. The program was presented in Spanish, with a limited number of headphones available for those who wanted to listen in English or Portuguese.

The Church staged similar cultural programs in 2004 and 2006.

“Ours is truly an international Church,” said Elder L. Whitney Clayton of the Presidency of the Seventy. “Our members can be found in nearly every nation and represent many diverse cultures and backgrounds. Here in Utah, the Church recognizes and appreciates the great diversity found in the community.”

“While the program is produced locally by hundreds of volunteers, we hope its impact will stretch far beyond the boundaries of Utah through subsequent distribution and broadcast,” Elder Clayton said. “Our support of the event is another example of the Church's international outreach and inclusivity.”

The program recounted the varied traditions of a great white god that are prolific among the native inhabitants of North and South America and the Pacific Islands. The coming forth of the Book of Mormon and the prophesied return of Jesus Christ were also highlighted.

Cast members said they hoped audiences would respond to the program's inclusive message.

“This will be a wonderful event to help bring communities together,” said cast member Annya Becerra, an Orem resident and a native of Mexico.

The program was recorded for future international broadcasts via BYUtv International.

Prior to the event, visitors had the opportunity to view a Conference Center exhibit featuring the works of Latin American and Polynesian artists, as well as photographs of the first Spanish-speaking LDS unit in Utah.