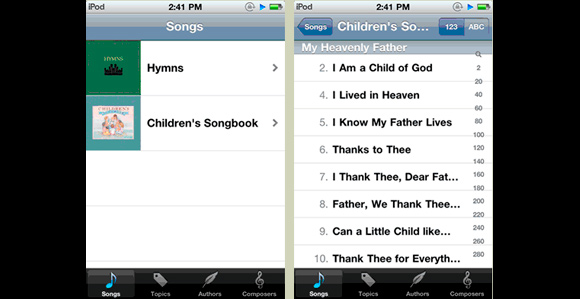 Church music from the Hymns and the Children’s Songbook are now available through a new app, LDS Music.

LDS Music contains the content of the LDS hymnbook, Hymns, and the Children’s Songbook, with each song presented in two views—the sheet music or simply the text of the verses. The songs are listed by number as well as by topic, author, composer, and alphabetical listing, depending on the user’s preference. The application also plays instrumental music for each song.

LDS Music requires iOS 4.0 or later and is compatible with iPhone, iPod touch, and iPad.

Hilton Campbell, a senior engineer on the project, said that the goal of this application is to provide members with access to Church music at church, at home, during a commute, or wherever they may be, rather than just having it on the Web.

Brother Campbell explained that the LDS Music app is just getting started; this first version is only the basics of what the team would like to do. Future plans for the application include adding music from seminary video soundtracks and Young Women camp songs, incorporating new features like playlists and audio controls, and making the application available in several languages, starting with French, Portuguese, and Spanish.