David and Janis Rowberry have been serving as chaplains on the Georgetown University campus for five years.

“The light of Christ has been given to everyone. … If I call you brother or sister, here’s the reason—it’s because we are all sons and daughters of God, and I care about you.” —Brother David Rowberry

“When you look into their eyes, you feel love in their presence.”

What makes this tribute to David and Janis Rowberry noteworthy is that the speaker is Michelle Siemietkowski, director of professional and residential ministry at Georgetown University—the nation’s oldest Catholic university—and the Rowberrys are a Latter-day Saint couple who have been serving as chaplains on campus for the past five years.

The Rowberrys accepted the invitation to join the ministerial staff of Georgetown in 2008, becoming the first Church members to do so. During their tenure, Brother Rowberry has also been director of the Church’s institute program in Washington, D.C.

In an interview during spring term, the Rowberrys reminisced about their unique experience that will conclude July 1.

“What an honor it has been to serve the students and our colleagues in this campus community,” Brother Rowberry observed. “Whether counseling, ministering at a hospital bedside, celebrating the students’ hard-won achievements, or struggling and praying with them during the dark hours of hurt, anger, loss, depression, and remorse, it’s been our privilege to share these sacred moments.”

The Rowberrys have been part of the chaplains-in-residence program, which draws top-notch educators and religious leaders from many faiths to be a pastoral presence on campus. Assigned to students in residence halls or apartments, the chaplains provide spiritual guidance, practical advice, prayer, and fellowship. The students are free to seek counsel within their own faiths, but they are encouraged to engage with others of different faith traditions.

Chaplains at Georgetown, the Rowberrys explained, do not proselyte for a particular faith, but are welcoming and compassionate pastors whose lives demonstrate they know and love their Heavenly Father.

“As chaplains-in-residence, we come from a variety of faith backgrounds, but we come together in seeking our Heavenly Father’s direction and blessing as we serve His children,” Brother Rowberry said. “All these faiths teach the value and importance of family, service, and love of God, so we feel a unity among ourselves, a genuine love and appreciation for each other.”

If a student inquires, the chaplains can talk about their particular faiths. Over the years, other chaplains invited the Rowberrys to make presentations in the dorms about their beliefs, and the missionaries and LDS students at Georgetown often assisted. In addition, the Rowberrys initiated interfaith panel discussions and speakers’ series on family, marriage, prayer, and service. They also worked with various student groups, including those at the Muslim Living and Learning Center. 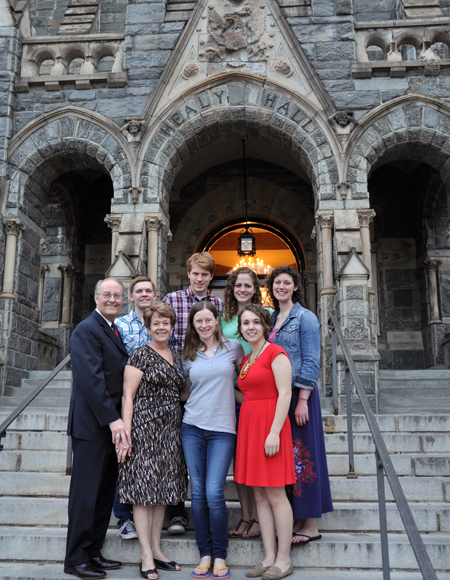 The Rowberrys stand with present and former students on the steps of Georgetown’s historic Healy Hall. Photo by Page Johnson.

Although the chaplaincy position is unpaid, the school provided the couple with campus housing. Students from many backgrounds who gathered in the Rowberrys’ apartment for family home evenings or scripture study will never forget the walls covered with pictures of the couples’ seven married children and 25 grandchildren. They also enjoyed nights in the dorm when the Rowberrys came calling with Sister Rowberry’s famous homemade rolls.

Such warmth, joy, and personal light made the couple a memorable presence on campus. Rev. Kevin O’Brien, vice president for mission and ministry at Georgetown, praised their service.

“David and Janis offered a caring presence to students living in residence,” he said. “Because of their commitment to their faith and their family, the Rowberrys were exemplary models for our students. For their fellow chaplains, they were always supportive and encouraging. We will miss them dearly.”

Likewise, Siemietkowski noted how the Rowberrys were examples of a “healthy, loving married relationship” as they walked across campus holding hands and interacting with students.

“It’s clear their dedication to family and God is paramount,” she said. “They also are not afraid to go where the difficult conversations are.”

LDS students such as Grace Brown of Chicago have appreciated attending scripture study in a family setting. “The Rowberrys love each of us and are aware of our needs,” she said.

Tucker Cholvin, a Catholic resident assistant in the dorms, believes he knows why Brother Rowberry connects so well with others: “From the moment you meet him, he makes himself open to you and lets you know he is deeply interested in you,” Cholvin said. “You want to spend time with David because he wants to spend time with you.”

Brother and Sister Rowberry are well-prepared to be good listeners. Brother Rowberry holds a bachelor’s degree in sociology and a master’s degree in counseling from Brigham Young University, plus a doctorate in education from the University of Colorado. His career in the Church Educational System has included positions as a teacher in Utah and Idaho and as an institute director in Nevada and Washington, D.C.  He has also been a reserve chaplain and colonel in the Air Force.

Sister Rowberry has a bachelor’s degree in home economics education from BYU and a master’s in social work from Catholic University of America. When she became Relief Society president of the Chevy Chase Ward, Washington D.C. Stake in 2011, she chose not to continue as a chaplain.

As the couple prepares to return home to Las Vegas, they remain upbeat about leaving their Washington friends.

“We’ve made lifelong friends of an eternal nature, and we will keep these bonds in our hearts,” Sister Rowberry said.

Brother Rowberry leaves as he came, with his belief in the goodness of men and women and his love for each person.

“The light of Christ has been given to everyone,” he said. “If I call you brother or sister, here’s the reason—it’s because we are all sons and daughters of God, and I care about you.”