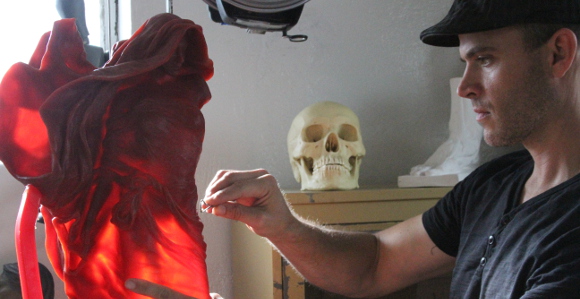 Tyson Snow works on the wax mold of The Reaper at his workshop in Springville, Utah. The Reaper won first place in sculpture in the International ARC Salon Competition.

“I really want to create things that are universal and timeless and beautiful and make people think about who they really are [as a child of God].” —Tyson Snow, LDS artist

As a young child, Tyson Snow always had a pencil in his hand. “Whether it was in sacrament meeting or a class at school, I was always drawing and sketching,” he recalled.

When he was 16 years old, he tried sculpting for the first time. He mixed up a bucket of plaster in an old tin popcorn container and let it set until he had a solid cylinder of plaster. He then removed the tin, spread a blanket on the ground, and, using a cheap set of wooden chisels, began to carve into the plaster.

“My intention was to make a head. I didn’t have any reference. I hadn’t had any previous training, but I lay there for hours and hours and found that I never tired of the process. I never got bored with it.”

Eventually, his efforts revealed part of a head and part of a face. “It was then that I realized not only that I had a knack for it, but I knew it was something that I loved too.”

Despite a natural aptitude and a love for his craft, it took Brother Snow—a member of the Salem 2nd Ward, Salem Utah Stake—time, effort, and faith to be in a position to produce and share his gift with others.

The first time he tried to sell some of his work, for example, he created three drawings but couldn’t afford to frame them. “It’s been a long road, but recently it’s really started to roll forward,” he said.

That momentum recently culminated in a new milestone—winning first place in the sculpture category in the International ARC Salon Competition, which focuses on classical art. Brother Snow’s entry The Reaper was one of more than 2,500 entries from over 1,000 artists. Brother Snow traveled to the European Museum of Modern Art in Barcelona, Spain, on November 20, where he accepted his prize as well as viewed the location where his sculpture will be exhibited until the art show moves to New York City later in January.

Getting feedback and positive recognition for his work has been “very exciting,” Brother Snow said.

One of the “truest” purposes of art, he said, is to “lift, elevate, and teach.” As a temple-going people, Latter-day Saints should recognize that images can be a powerful teaching tool, Brother Snow remarked. “Unfortunately, we live in a very literal world. All of those wonderful, rich meanings that symbols have to offer—it’s a language that has been primarily lost.”

Brother Snow said part of his hope in creating art is to teach people sacred truths—“what our potential might be or what our relationship to God is or how we can change through the Atonement.”

The Reaper, for example, is the product of years of Brother Snow’s accumulated thoughts and feelings surrounding death. The Grim Reaper has typically been used as a symbol to strike fear into the hearts of people and has traditionally been depicted as a skeleton in a cloak. “But [I believe] if death is properly understood, or understood as Latter-day Saints or as others in the religious world [understand it] or as the Savior taught it, it’s not something to be feared.”

With that in mind, Brother Snow decided to depict his reaper as a woman. “Women in general have the ability to give new life. In the same way, death is not the end; it’s a beginning.”

He also decided to portray her in a state of repose. Her face is turned down. She is standing forward but the sickle is lowered. “She’s not aggressive,” Brother Snow explained. “She’s calm, powerful, and peaceful. … A lot of people associate [death] with suffering and pain, but death can also release us from those things. It can be a peaceful transition, a release.”

Brother Snow’s thoughts surrounding the portrayal of her as a “reaper” were also greatly influenced by his study of the scriptures, specifically in Revelation and Matthew where the Lord gives the parable of the wheat and the tares and the reapers are identified as the angels of God. He also referenced Doctrine and Covenants 86, where the Lord indicates that the angels are crying out to be sent forth to reap the fields.

“There were definitely a lot of thoughts that accumulated in the one piece,” Brother Snow said. “It’s one that I had thought about and developed over years. I’d done lots of sketches but was always afraid to do it. I didn’t think I was quite ready.”

Eventually, it was his study of his topic that spurred his decision to try. In the art world, the idea that life is short or that “You’re here today, gone tomorrow, so do good things with the time you have” is often depicted. “You’ll see a candle that is nearly burned down or flowers because you pick them one day and the next day they’re gone. I finally thought, ‘I need to make this happen because time keeps rolling and the clock keeps spinning and I’m not producing the things that I thought and felt that I should.’”

Ultimately, Brother Snow recognizes where his abilities come from. “It’s been given as a gift,” he said. “I really want to create things that are universal and timeless and beautiful and make people think about who they really are [as a child of God].” 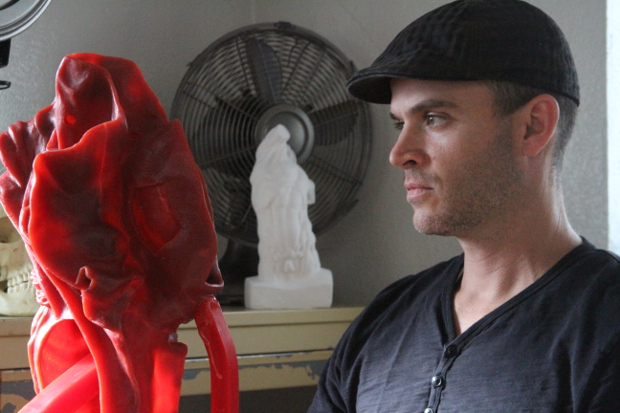 Tyson Snow works on the wax mold of The Reaper at his workshop in Springville, Utah. The Reaper won first place in sculpture in the International ARC Salon Competition. Photo by Rachel Sterzer. 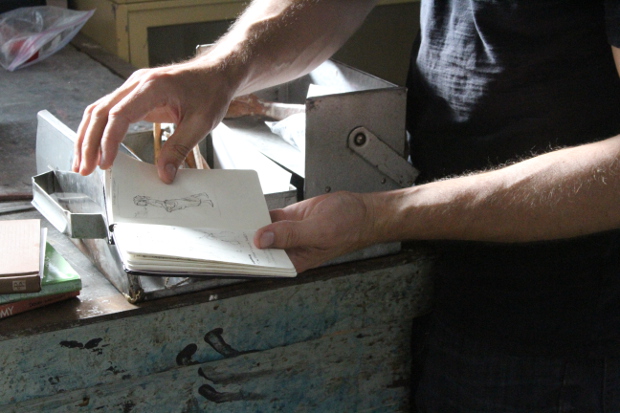 LDS sculptor Tyson Snow displays one of his sketchbooks in which he collects ideas for his work at his workshop in Springville, Utah. Photo by Rachel Sterzer.