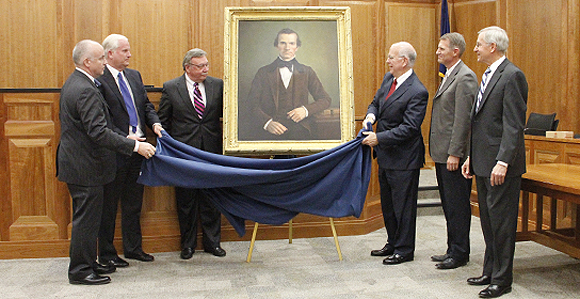 “What we found was that he was a very clever, smart, and capable lawyer, one very prominently recognized in the community and that was well-respected among his own colleagues of lawyers.”
—John W. Welch, BYU J. Reuben Clark Law School professor

In addition to being the “second elder” of the Church during the Restoration, one of the Three Witnesses to the Book of Mormon, and the principal scribe for its translation, Oliver Cowdery was the first Mormon lawyer in Church history.

Now, a portrait hanging in the J. Reuben Clark Law School at Brigham Young University memorializes him for that achievement and the sterling character he exemplified during his legal career.

Unveiled during a luncheon program November 5 at the law school, the portrait was painted by Ken Corbett in 2006, commissioned that year by the Mormon Historic Sites Foundation from a daguerreotype photograph discovered in the Library of Congress holdings by LDS researcher Patrick Bishop. It was a serendipitous discovery for Brother Bishop, who was working on something else at the time.

After testing, the foundation determined with a substantial degree of confidence that the photograph from which the painting was made is of Oliver Cowdery.

In addition to Elder Snow, speakers at the luncheon included attorney Jeffrey N. Walker, adjunct faculty member at the school and a senior adviser and volume editor for the Joseph Smith Papers Project of the Church History Department; John W. Welch, a prominent professor at the law school; and James Rasband, dean of the law school.

In his remarks, Elder Snow noted that Oliver died at age 43. Out of the Church for a time due to disagreements with early Church leaders, he sought readmission and was baptized in 1847 at Winter Quarters, Nebraska, while the Saints were making their exodus from Nauvoo to the Salt Lake Valley. He was rebaptized and had plans to go with the Saints the following year to the valley. But he died in Richmond, Missouri, of tuberculosis before he could make the journey.

“We can only wonder what great accomplishments he might have given … had he survived to an older age,” Elder Snow said.

“Certainly in the early days of the Church there was no closer confidant to the Prophet Joseph Smith than Oliver,” he said. “He was next in authority only to Joseph and was present at many of the critical events in the Restoration of the gospel.”

In addition to being one of the Three Witnesses, he was present during the restoration of the Aaronic and Melchizedek Priesthoods and “during those marvelous manifestations at the Kirtland Temple,” Elder Snow noted.

“There are many great LDS attorneys, and Oliver Cowdery was the first LDS attorney, so it just makes sense that his portrait will hang here in this school.”

Brother Walker said that unlike those who left the Church in difficult times, Oliver never became antagonistic against the Church. 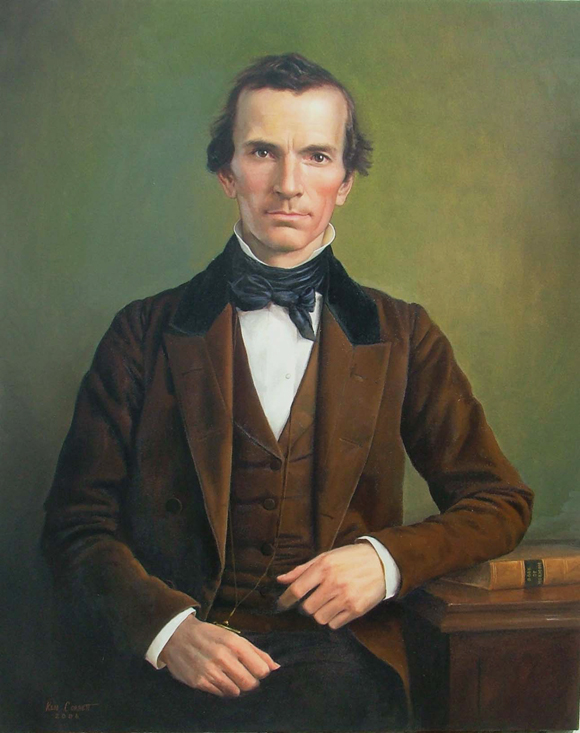 The portrait of Oliver Cowdery that now hangs in the J. Reuben Clark Law School Library is painted from a daguerreotype found in the Library of Congress in 2006. Photo courtesy of Ken Corbett.

While in Missouri, he made the decision to practice law, Brother Walker said. After his excommunication—on charges he disputed—Oliver went home to Ohio, where he studied law and became an attorney in 1840, going into practice with his brother, Lyman.

Brother Walker said that in 2006, the year of the 200th anniversary of Oliver’s birth, he started researching Oliver’s legal practice. He talked to Richard Lloyd Anderson, a Church history professor at BYU who has studied Oliver’s life extensively. Brother Anderson said he had been to Tiffin, Ohio, in the mid-1960s, where he had seen evidence of Oliver’s law practice.

Journeying to Tiffin, Brother Walker visited a courthouse that had been closed in preparation to being torn down. In a basement vault, he was surprised to find documents for thousands of pleadings from Oliver as an attorney.

“We started to realize that we did actually find Oliver Cowdery’s law practice,” he said.

“He had beautiful handwriting. We ended up scanning almost 2,500 pages of his law practice. Since then we’ve been back three other times, and we now have over 15,000 pages of the law practice in Tiffin as we try to put together exactly how he practiced law.

“What we found was that he was a very clever, smart, and capable lawyer, one very prominently recognized in the community and that was well-respected among his own colleagues of lawyers.”

In the end, when he went to Winter Quarters to seek readmission to the Church, Oliver said, “I feel that I can honorably return. I sustained an honorable character before the world during my absence from you,” Brother Walker recounted.

Brother Welch said, “We will all be better lawyers if we seek to emulate Oliver’s sensitivities and legal skills.”

He mentioned 10 of those skills, including accuracy, an understanding of authority, an acute and analytical mind, forensic (debate) skills, tolerance for the views of others, legal resourcefulness, his character as justice of the peace, his putting of family first in making difficult decisions, his sense of timing, and his knowledge of the importance of witnesses, affidavits, and testimony under oath.

Kory Staheli, director of the school’s law library, announced that the portrait would hang in the main entrance of the library.