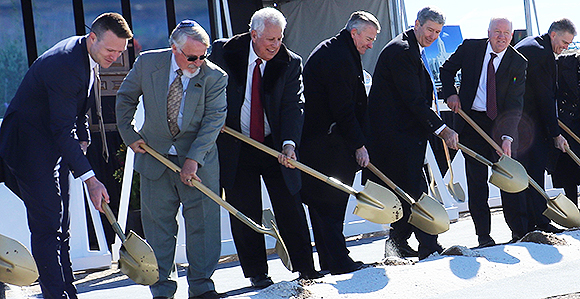 “Make this groundbreaking experience a defining moment—our own personal offering and commitment to live in holiness to the Lord.” —Elder Brian K. Taylor of the Seventy

The past few months have been unforgettable for Latter-day Saint athlete Taysom Hill. The uber-versatile pro football player scored his first NFL touchdown, fell just a game short of the Super Bowl, and was even featured on a popular online cartoon series.

But perhaps the memory of a historic mid-March morning in his hometown will be the most lasting and meaningful moment in a year defined by highlights.

On Saturday, Hill and thousands of his fellow Pocatello-area residents gathered under brisk, clear skies in an elevated corner of this eastern Idaho city for the groundbreaking service for the future Pocatello Idaho Temple. Once completed, it will be the Gem State’s sixth temple and an instant local landmark.

“Having the opportunity to come back to your hometown and be part of such a special, historic event has been a highlight of the year for me,” he told the Church News.

Elder Wilford W. Andersen, a General Authority Seventy and President of the Idaho Area, presided over the event and offered the dedicatory prayer. Joining him Saturday were his counselors, Elder S. Gifford Nielsen and Elder Brian K. Taylor.

Also attending were Idaho Gov. Brad Little and several representatives of Pocatello’s broad religious community. Thousands of bundled-up Idahoans attended the gathering, which was broadcast to congregations across the future Pocatello temple district.

In his dedicatory prayer commencing construction of the future temple, Elder Andersen expressed gratitude that the Pocatello temple will one day join the “holy temples” that “dot the earth” in fulfillment of prophecy:

“I dedicate this site for the construction of a House of the Lord. I pray that the Holy Spirit will be felt by all who participate in the building of this temple, that they will be safe and protected during their work, that they will sense the importance of the sanctuary they are building. I pray that the same Holy Spirit will be felt by all who watch it being built with anticipation for the day when they can enter its sacred walls and worship Thee.”

In his prayer, Elder Andersen also noted the blessings that await a community that will soon become a “temple city.”

“As it is transformed into a beautiful garden spot, we pray that it will bring a sense of peace and reverence to this wonderful city. We are thankful for the harmony and unity we feel among the citizens of this community, Father, and we pray that every righteous endeavor they undertake will be prospered by Thy all-powerful hand.”

In his remarks prior to the dedicatory prayer, Elder Andersen recognized the leaders from many local churches participating in Saturday’s service. “We thank you for your support and are touched and honored that you would come and be with us, and we want to reciprocate in the future as we work together, arm in arm, to accomplish our mutual goals of addressing human suffering and helping people turn to God and find peace in their hearts.”

Following the dedicatory prayer, the visiting Brethren—along with Hill, Little, and representatives from the city’s religious community—were given commemorative shovels and each turned over a load of soil, symbolically commencing the building of the temple.

Elder Taylor focused his remarks on the holiness that defines temples.

“The Lord empowers us in His holy temple as we make and keep sacred covenants. ‘In the ordinances ... the power of godliness is manifest’ [Doctrine and Covenants 84:20].”

Holiness, he added, was found in Pocatello recently when 3,000 youth converged, a few days ago, on the temple site to clear out sage brush and clean the area in preparation for Saturday’s groundbreaking services. “And [now they are] preparing to flock to the baptistry to perform sacred ordinances for your ancestors.

Holiness, he said, defined the pioneers, farmers, and professionals who came to Pocatello and faithfully fasted and prayed over the region’s flocks, crops, and endeavors.

Elder Taylor invited all participating in Saturday’s service to “make this groundbreaking experience a defining moment—our own personal offering and commitment to live in holiness to the Lord.”

One of the “pillars” honored by Elder Taylor was 101-year-old Phyllis Moon, a long-time Pocatello resident. She was thrilled Saturday to pull on her winter jacket and gloves and sit among the thousands of others at the groundbreaking service.

“This is a wonderful day—and maybe I’ll be able to return for the temple dedication,” she said with a smile.

When asked what makes the Pocatello community a special place, she answered without hesitation: “It’s the people—there are just a lot of good people here.”

“We are now a step closer to having a house of the Lord here in Pocatello,” he said. “It is exciting. What a blessing for us and this community.” 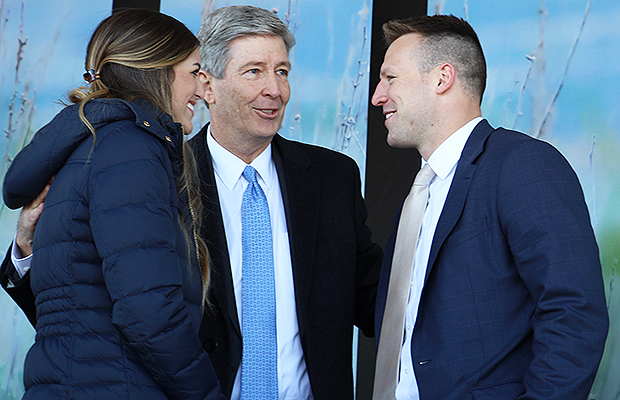 A pair of former BYU quarterbacks—Elder S. Gifford Nielsen and current NFL player Taysom Hill—enjoy a moment together, along with Emily Hill, prior to the March 16, 2019, groundbreaking service of the Pocatello Idaho Temple. Photo by Jason Swensen.

Even as scores of Pocatello-area residents posed for photos taking their turns turning over ceremonial shovels of rich Idaho soil, Hill considered the impact temples have had in his life. He remembers youth excursions to the Idaho Falls Idaho Temple to perform baptisms. He later returned to that venerable temple prior to his mission to Australia to take out his own endowments.

“The temple helped me to set goals and put everything into perspective,” he said. “I want to play football for as long as I can. But finding my wife, Emily, and taking her to the temple has been the greatest experience of my life.”

The temple will be located east of Satterfield Drive and Butte Street in Pocatello. Construction is expected to take between two and three years to complete. Once dedicated, the Pocatello Idaho Temple will serve more than 64,000 Latter-Day Saints from southeastern Idaho. 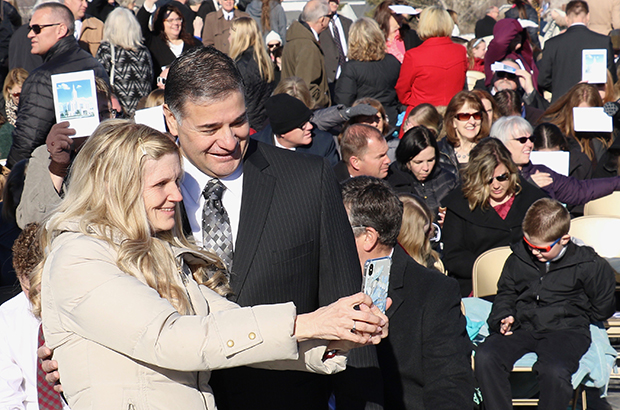 A festive mood was shared by Pocatello-area residents who participated in the March 16, 2019, groundbreaking service for the Pocatello Idaho Temple. Photo by Jason Swensen. 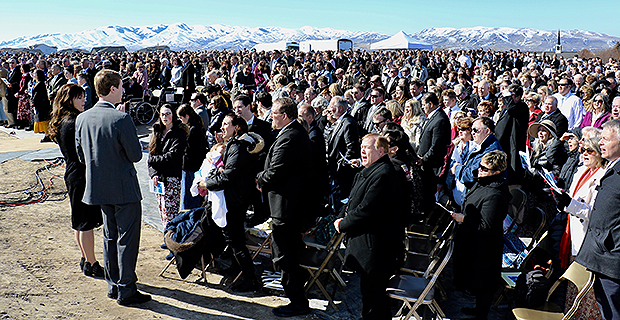 Thousands gathered under brisk, clear skies on March 16, 2019, for the groundbreaking service of the Pocatello Idaho Temple. Photo by Jason Swensen. 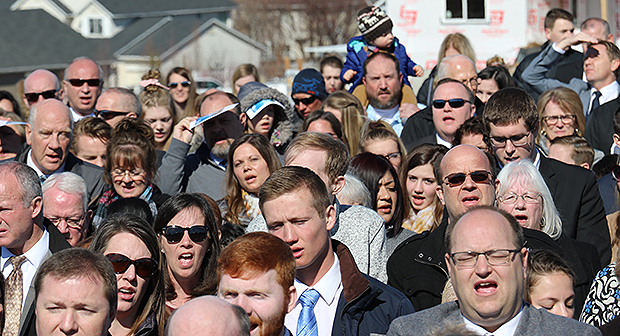 Scores of Latter-day Saints sing the closing hymn—“The Spirit of God”—at the conclusion of the March 16, 2019, groundbreaking service of the Pocatello Idaho Temple. Photo by Jason Swensen. 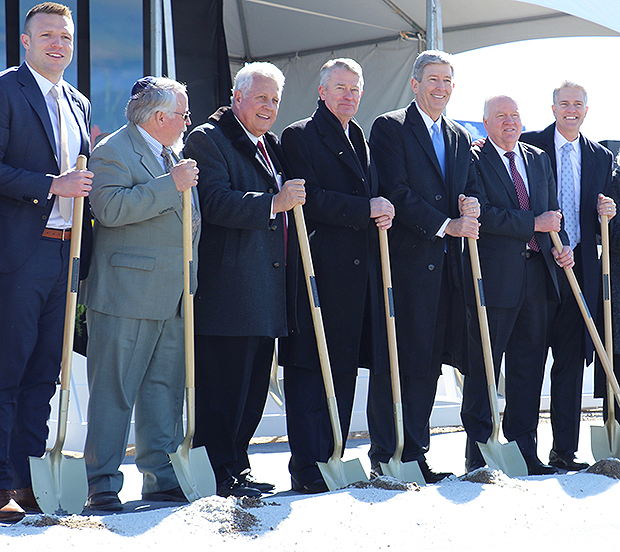 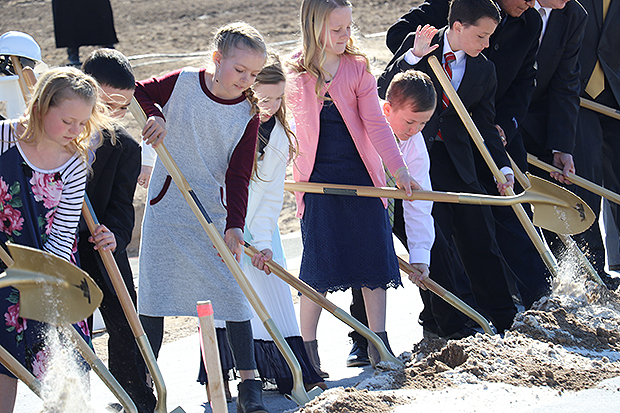 Children take a turn turning soil at the March 16, 2019, groundbreaking service of the Pocatello Idaho Temple.
Photo by Jason Swensen. 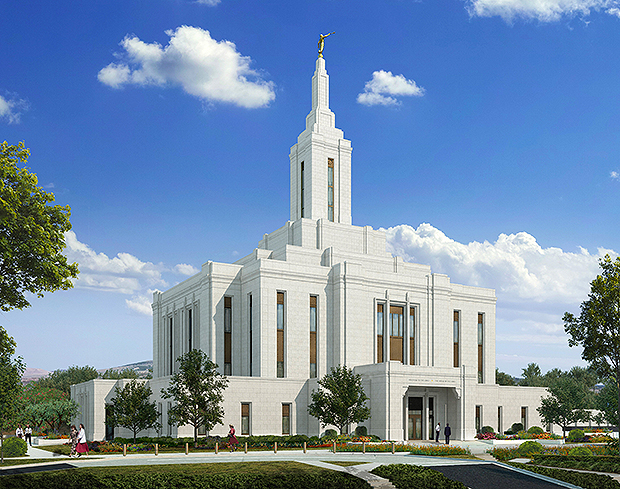 Artist's rendering of the future Pocatello Idaho Temple. It will be the Gem State's sixth temple.