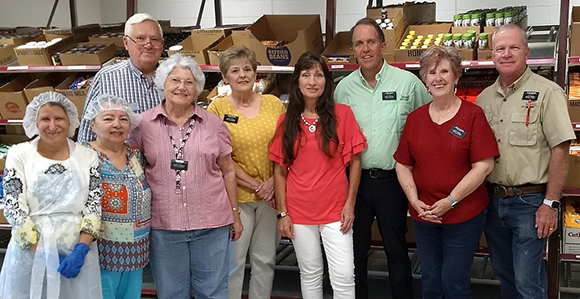 Marshall and Sandra Henrie, managers of the bishops’ storehouse in Albuquerque, and other volunteers who helped provide food and supplies to provide meals to asylum seekers. Photo by Deborah Fillerup Weagel.

Situated more than 266 miles north of El Paso, Texas, and nearly a four-hour drive from the United States border, Albuquerque—New Mexico’s largest city situated on the high desert—has seen an influx of asylum seekers being sent here by the U.S. government.

People fearing persecution from Mexico and countries further south in Central America have been seeking asylum in the U.S. and overwhelming facilities and documentation processes in El Paso. To help ease the logjam there, asylum seekers have been sent to Albuquerque for a brief stay—generally two days or so—before continuing on to other areas throughout the United States to join their sponsors.

The result is hundreds of people arriving in Albuquerque without some of the most basic necessities—food, clothes, and such. And responding to the need has been the Church and its members, joining other religious and relief organizations in aiding the asylum seekers.

Earlier in the year, asylum seekers came to Albuquerque by the hundreds for temporary assistance. Many of those who sought asylum came from Central America and entered the United States in El Paso, Texas, an official port of entry. Upon entry, they were detained by the U.S. Border Patrol and given an alien number.

Then Immigration and Customs Enforcement (ICE) screened them and processed their requests for asylum. If they had a credible fear of persecution as well as a sponsor who would be responsible for them, those with children could be released to go to the sponsor. ICE set court dates for each asylum seeker near the cities of their sponsors to determine whether they could provisionally remain in the U.S. or needed to be deported.

Upon release in El Paso, before traveling to their sponsors, asylum seekers could go to hospitality centers run by non-profit or faith-based organizations for temporary help. However, when the facilities in El Paso became overloaded, some of these asylum seekers were sent to Albuquerque. Once in Albuquerque, they typically stayed about two days and then traveled by bus, train, or plane to areas throughout the United States to their sponsors.

Lutheran Family Services, Catholic Charities, Albuquerque Interfaith, St. Michael and All Angels Episcopal Church, and Congregation Albert received the asylum seekers and provided housing, food, transportation, and travel coordination. In conjunction with these organizations, volunteers throughout Albuquerque willingly gave of their time, expertise (such as Spanish translation and/or medical skills), and resources.

Members of The Church of Jesus Christ of Latter-day Saints were encouraged by their local religious leaders to assist as needed. Maria Wittwer was called as the Albuquerque Coordinating Council Compassionate Service Leader to be a liaison between the service and faith-based organizations in the community and the Church. She oversaw the resources of seven stakes and the Church in general to help meet the needs of hundreds of incoming migrants.

“I met lots of asylum seekers from Central America, mostly from Honduras, El Salvador, and Guatemala,” Wittwer said. “When they got to Albuquerque, people were tired. Most had been traveling for a long time. People were grateful for the help that we gave them.”

Wittwer also interacted closely with volunteers and said they were “selfless in their work.”

“Many people made or donated food for meals,” she explained. “We had lots of Spanish speakers who would volunteer to call sponsors, make travel arrangements, and visit with guests. We had Relief Society sisters who did donation drives. We had families who would bring their kids to help serve food or sort and distribute donations. There were people from the Young Single Adult ward who would volunteer. We had volunteers drive in from Santa Fe and from Los Lunas. The missionaries were involved with setting up cots.”

Ann Parsons, Young Women president in the Santa Fe New Mexico Stake, reported their youth collected over 13,000 items as part of a service project for a youth conference. They spent hours gathering donations prior to the conference; then at the conference, they sorted and boxed the goods.

They had received a list of some of the most needed items, including clothing, shoes, over-the-counter medications, non-perishable foods, backpacks, carry-all bags, diapers, small toys, etc. Parsons said one particularly meaningful moment came when “one of the youth participating in the service project said that just a few years earlier he and his family were recipients of similar service, and it meant so much to him to be able to give in return.” 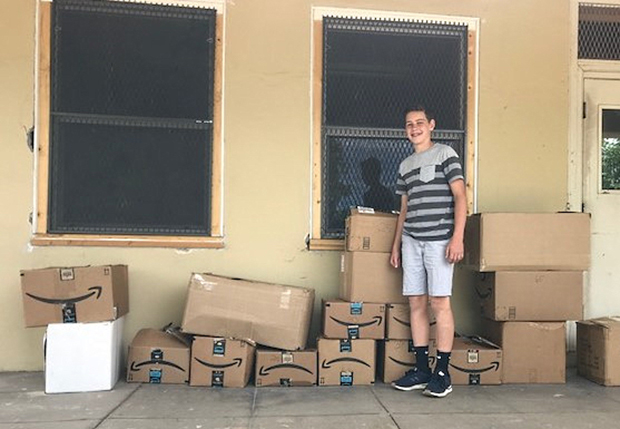 As an Eagle Scout project, Jared Esplin, a member of the La Cueva Ward in Albuquerque, and his friends assemble snack bags for asylum seekers. Photo by Sarah Esplin.

Sister Paityn Steadman, a Latter-day Saint service missionary, assisted as a food coordinator. Religious congregations from a variety of different faiths would prepare lunch and dinner. Each organization was responsible for one meal at a time, and the food could be cooked in advance or on site. Some of the popular menu items included tortillas, rice, beans, soup, and pizza.

“The people were kept in very humble circumstances,” Sister Steadman said. “They were mostly young families—couples with young children. There were also some single mothers with newborn infants. They seemed very grateful to come and be welcomed with hot food, beds, and showers.”

Marshall Henrie explained, “Our job was to avert a humanitarian crisis that would take place if these people were just put on the street.”

Wittwer, as coordinating council compassionate service leader, would approve food and supply orders for representatives from the various participating service and faith-based groups. Then they could go to the storehouse to acquire the food and supplies needed to provide meals for the asylum seekers.

Aaron Du Bay, program director for the Refugee and Asylee Programs at Lutheran Family Services, praised the Church for its contributions to the asylum seekers. He said the Church sent a small truckload of travel snacks daily for the migrants. Since they would often travel long distances by bus, train, or plane from Albuquerque to meet their sponsors, these snacks provided them with nourishment along the way. 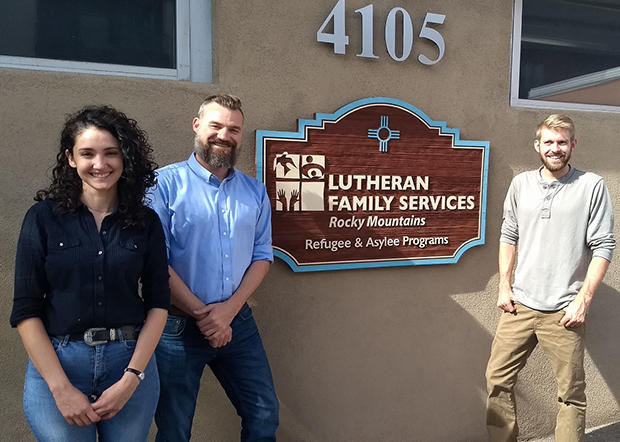 The snacks included nonperishable foods found at large box stores, such as “beef jerky, crackers, trail mix, nuts, fruit cups, etc.,” Du Bay said. This was a valuable service, because the asylum seekers had no money of their own to purchase food during the journey.

Jared Esplin, a member of the La Cueva Ward in Albuquerque, created snack bags for his Eagle Scout project. He and his friends made about 1,000 bags, containing items such as nuts, crackers, granola bars, fruit leathers, and such, and then delivered them to Albuquerque Interfaith. Volunteers and workers from individual organizations made a fresh sandwich to include in each snack bag.

Regarding the asylum seekers, Jared said, “When I saw their needs, that they didn’t even speak English, I felt empathy and wanted to help them.”

However, the current effort in Albuquerque to assist asylum seekers has come to somewhat of a standstill. Due to policy changes at the border, families are not being processed and sent in large groups to the area at this time. As of July 16, migrants need to first apply for asylum in the first safe country they came to, often Mexico, and be denied asylum there, before applying for assistance in the United States.

Also, a “Remain in Mexico” policy now requires those seeking asylum in the southern borders to stay in Mexico while waiting for the immigration courts to process their case, and this could take years. So now many non-profit and faith-based organizations are focusing their attention on helping migrants in cities such as Juarez, Mexico, where thousands of people wait for a court hearing.

Whether or not more large groups of asylum seekers will be sent to Albuquerque in the future is uncertain, but members of the general community demonstrated compassion to those who sought a better life in the United States. Regardless of background or religion, numerous volunteers offered their services to help fellow human beings in a time of displacement and need. 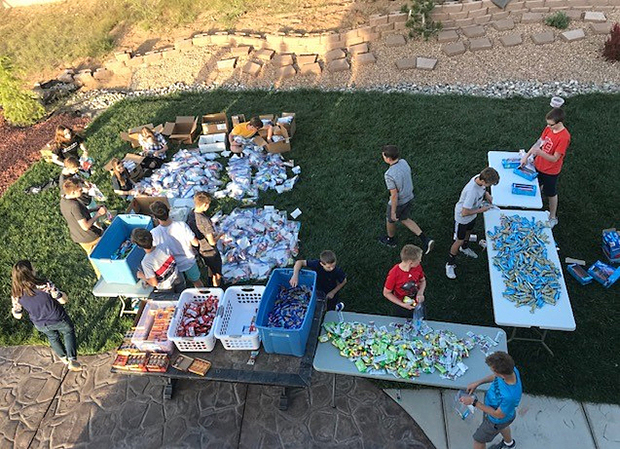 As an Eagle Scout project, Jared Esplin, a member of the La Cueva Ward in Albuquerque, and his friends assemble snack bags for asylum seekers. Photo by Sarah Esplin.