On January 9, 2020, Elder Jorge M. Alvarado visits with people in southern Puerto Rico gathered in an open space being utilized as a tent community following a series of earthquakes. Photo courtesy of President Franki Ruiz.

For casual news watchers, the 6.4 magnitude earthquake that struck Puerto Rico on Tuesday, January 7, may not be registering as a major catastrophe because there have been relatively few deaths or serious injuries.

But look a bit closer.

Because of relentless seismic activity over the past several days, people living on the south end of the island remain frightened and exhausted.

Many are simply praying for the shaking to stop.

Since December 28, 2019, more than 500 earthquakes have rattled the Caribbean island—with the largest striking early on January 7 near the southwest coast. Thousands have been displaced; hundreds of thousands are without reliable power; and in southern communities, parks, fields, and baseball diamonds are doubling as campsites for people too afraid to sleep under their own roofs.

“The situation is desperate, in some ways, because people cannot return to their homes,” said Ponce native Elder Jorge M. Alvarado, a General Authority Seventy and a counselor in the Caribbean Area Presidency.

One person lost his life in the quakes, and nine others have been injured.

No Latter-day Saint missionaries and members in Puerto Rico were harmed—but many are emotionally bruised by yet another series of natural disasters on a United States territory still emerging from 2017’s Hurricane Maria.

The homes of three Latter-day Saint families from the Ponce Puerto Rico Stake were damaged, according to a report prepared by the Caribbean Area Presidency. The regions hit hardest include neighborhoods in Ponce and in the nearby communities of Juana Diaz, Guayanilla, Guánica, and Yauco.

The Church News spoke with Elder Alvarado on Friday, January 10, via cell phone while he was traveling across those municipalities with dozens of shelter canopies expected to be used as early as tonight by people in need.

He returned to his homeland following Tuesday’s quake to minister alongside local leaders—offering both temporal and emotional support. He’s visited many Latter-day Saints in their homes and businesses. Many of the people sleeping in tents, open fields, or in cars parked along darkened roadways he counts as close friends and fellow members.

The weight of the past several days was evident in his phone call. His voice cracked with emotion as he shared accounts of delivering tarps and other provisions to people who are frightened and displaced.

Puerto Ricans are resilient people, he noted. “But when you go to their homes, you can see the emotional turmoil—especially with the kids.”

Many Ponce stake members remain fearful to return to their residences because of the ongoing aftershocks.

“We’re camping at the neighborhood park and sleeping on cots,” reported Migdalia Rivera. “We’ve felt a lot of fear and we are anxious that something worse might happen. We’ve never experienced anything like this. This is terrible. And many other Church members are in the same condition.”

Members and missionaries began working almost immediately following the main quake on January 7 to deliver both temporal and spiritual support.

“There’s a lot of need,” said Elder Alvarado. “We’re getting together with the local officials to see what we can do. We’ve visited with the National Guard.”

Church funds have been provided to purchase food, drinking water, hygiene supplies, and other non-food items. Teams of missionaries are working with the local humanitarian relief partners to construct large tents that can shelter up to 10 people. Supermarkets have generally remained open, so local priesthood and Relief Society leaders are purchasing provisions locally and distributing them wherever needed.

And, no surprise, members and missionaries are donning yellow “Helping Hands” vests and joining in service projects. Meanwhile, Church-provided mental health professionals are being made available to help Latter-day Saints cope with the ongoing crisis.

“The greatest [desire] that people have is to have the assurance that this is going to end,” said Ponce Puerto Rico Stake President Franki Ruiz. “For that purpose, members from all the [Puerto Rico] stakes are gathering needed items and traveling to my stake to provide temporal and spiritual support.

“People need to be heard and to know that God loves us and will protect us.”

Elder Alvarado said he’s been uplifted by the unity of his fellow Puerto Ricans. Once again, it’s proving unshakeable.

“People are saying, ‘This is another trial—let’s take it with a good heart,’” he said. “Our message is to keep praying for the safety of our families. The Lord is listening.” 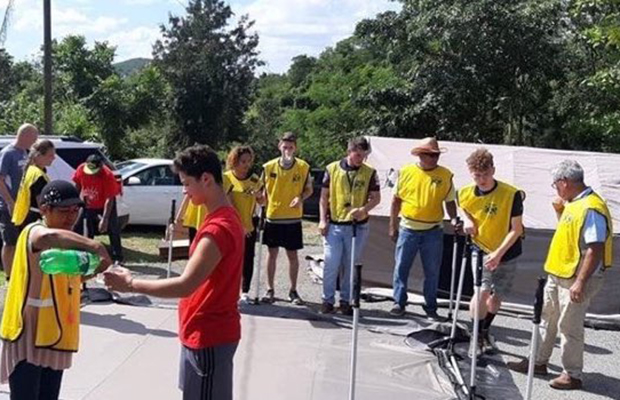 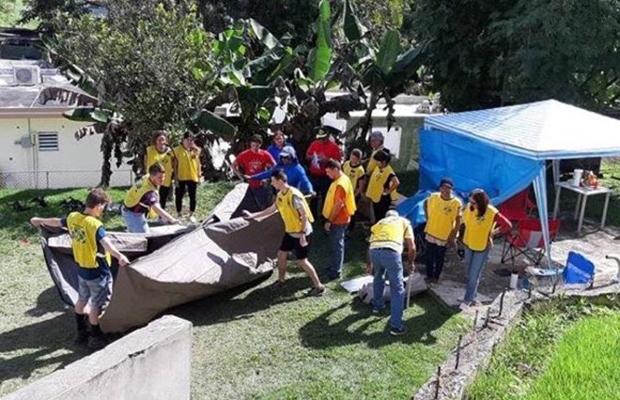