A detailed shot of the Kinshasa Democratic Republic of the Congo Temple.

“The temple will shine a light on The Church of Jesus Christ of Latter-day Saints in Pittsburgh—and accelerate the gathering of Israel.” —Chris Hoke, Pittsburgh Pennsylvania North Stake president

For Latter-day Saints living in the Pittsburgh area, Sunday’s announcement that a temple would one day be built in Steel City marked the spiritual definition of a historic “game changer.”

“This changes everything,” said President Hoke, who spent his career tormenting quarterbacks for the Pittsburgh Steelers. “The temple will shine a light on The Church of Jesus Christ of Latter-day Saints in Pittsburgh—and accelerate the gathering of Israel.”

It’s not easy for Latter-day Saints in President Moura’s coastal city to travel to the Buenos Aires Argentina Temple. It can take more than 10 hours by bus. Still, they are proven “temple-going” people.

“Between the two stakes operating in the city, we typically plan for a monthly excursion to worship in the beloved Buenos Aires temple,” he said.

Still, having a temple will forever change the Bahía Blanca members—and the entire community.

“Having a temple here will allow more people to come to know the Church and the gospel of Jesus Christ. It will increase our standing in the community as our neighbors learn more about us.”

Argentina is home to 77 stakes, along with operating temples in Buenos Aires and Córdoba. Besides Bahía Blanca, future temples are planned for the Argentine cities of Mendoza and Salta.

Following his announcement of a future temple in Shanghai, President Nelson noted that context was essential for the planned edifice.

For more than 20 years, temple-worthy members in the People’s Republic of China have attended the Hong Kong China Temple. But last year, the Hong Kong temple closed for a much-needed renovation.

“In Shanghai, a modest multipurpose meeting place will provide a way for Chinese members to continue to participate in ordinances of the temple—in the People’s Republic of China—for them and their ancestors,” he said.

The Church President emphasized the Church’s long-established practice of Latter-day Saints honoring, obeying, and sustaining the laws wherever they live.

“Because we respect the laws and regulations of the People’s Republic of China, the Church does not send proselyting missionaries there; nor will we do so now.

“Expatriate and Chinese congregations will continue to meet separately. The Church’s legal status there remains unchanged. In an initial phase of facility use, entry will be by appointment only. The Shanghai Temple will not be a temple for tourists from other countries.”

Tallahassee, Florida, native Shannon Havlicak Grondel remembers the four-hour drive from Florida’s capital city to the Orlando Florida Temple as being a defining element of her childhood.

“While such a trek is minuscule in comparison to those of Saints around [the] world whose journey can only be made by boat, plane, or countless hours by train—it was nonetheless an obstacle to more regular temple attendance.”

Havlicak Grondel was thrilled Sunday to learn her hometown would be counted among the world’s “temple cities.”

“I love Tallahassee—I was raised there, and so much of who I am I owe to that small town, and it is beautiful to think that Heavenly Father and His prophets saw fit to place a temple there,” she said. “It reminds me that Heavenly Father is mindful of each of us individually, just as He is mindful of a small town like Tallahassee among the many large and bustling cities of Florida.”

Almost 15 years after the dedication of Nigeria’s first temple, Latter-day Saints in the western African nation have reason again to rejoice—a temple will one day open in the southern municipality known as Benin City.

Following Sunday’s announcement, many in Benin City and across southern Nigeria will likely find strength rereading the words uttered by President Gordon B. Hinckley on August 7, 2005, during the dedicatory prayer of the Aba Nigeria Temple:

“In the spread of Thy work over the earth, we have in this good land and in other nations of Africa, strong stakes of Zion with disciples of great faith, obedient to Thee, and with a desire to carry eternal truth to many more.

“Bless this nation that it may rise in strength and freedom among the nations of Africa. Bless its leaders that they may look with favor upon Thy Saints and safeguard their rights, property, and privileges.

“Bless Thy faithful people and keep them from disease and pestilence, from poverty and want, from conflict of any kind, and from political oppression.”

More than 177,000 Latter-day Saints live in Nigeria, worshipping in 54 stakes. 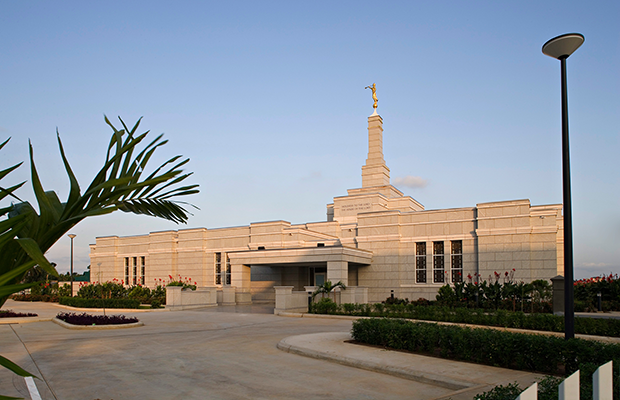 Syracuse Utah Stake president Erik Hjorten considered himself and his fellow members to be a blessed people even before Sunday’s announcement that a temple would be built in his fast-growing Northern Utah city.

After all, plans are already underway for a future temple in nearby Layton.

So the Syracuse, Utah, temple announcement “was a great surprise,” said President Hjorten, whose phone has been bombarded with texts since Sunday’s announcement.

“It does give our lives a renewed sense of purpose as we consider the covenants we make with our Heavenly Father.”

The president of the original stake in Syracuse—where there are now five stakes—moved to the city with his family 14 years ago. Since then he has witnessed “an amazing amount of growth.” And plans are underway for even more residential development.

Now a future temple will allow Syracuse-area Latter-day Saints to renew their own commitments while discovering opportunities to share the joy of the temple with others in their dynamic community.

The future Syracuse Utah Temple will be the 24th temple in Utah either in operation, under construction, or announced.

During a general conference defined by history, it was perhaps apropos that President Nelson would announce the Church’s plans to build its first temple in the Arabian Peninsula: the future Dubai United Arab Emirates Temple.

“The plan for a temple in Dubai comes in response to their gracious invitation, which we gratefully acknowledge,” President Nelson said during his Sunday afternoon address.

The future Dubai temple will serve thousands of members living in two stakes in the Gulf states and a number of member districts in the Middle East, northern Africa, eastern Europe, and western Asia.

The edifice will be constructed in District 2020 at the conclusion of the worldwide event Expo 2020 Dubai. The future temple site will also include a meetinghouse.

“We are grateful to the government officials of the United Arab Emirates who have welcomed us so warmly into their country,” said Elder David A. Bednar, who oversees the work in the Middle East Africa North Area, in the Church’s release. “Only the Spirit of the Lord could have brought about such a mighty miracle. The presence of a temple in Dubai will be a great blessing in the lives of our Church members.”

Tessa Elizabeth Roberts of the Abu Dhabi First Ward was standing up to take notes and stay awake during the Sunday afternoon session because it was early Monday morning in the United Arab Emirates.

“When our dear prophet President Nelson announced [a temple in] Dubai, UAE, I threw my pen down, shouted for joy, kept jumping up and down, ran to my father, embraced him, and started to cry,” she wrote in an email.

Sunday’s announcement of a future temple in Pittsburgh, Pennsylvania, was an answer to many prayers offered over many years, said Pittsburgh Pennsylvania Stake president Erich Peterson.

“It is a blessing to know that there will one day be temple endowment and sealing power in the Pittsburgh area,” he said. “We are so humbled.”

President Peterson said the Lord is building “spiritual temples” in Pittsburg prior to the construction of a physical temple. It’s a priceless time for all living in the future temple district to build their own spiritual strength.

“Now let’s get ready to serve and increase our efforts to do temple work and family history work.”

As a former player on Pittsburgh’s most beloved sports team, President Hoke of the Pittsburgh Pennsylvania North Stake is excited to one day invite his many local friends and contacts to the future temple open house “and explain to them the message of the gospel.” 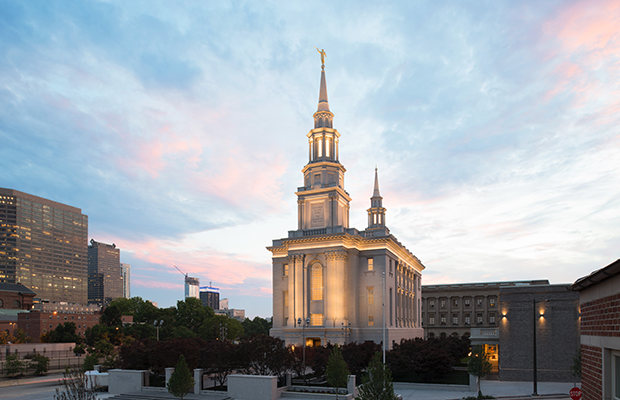 Lubumbashi, Democratic Republic of the Congo

On April 14, 2019, Elder Dale G. Renlund of the Quorum of the Twelve Apostles dedicated the Kinshasa Democratic Republic of the Congo Temple.

In his dedicatory prayer, Elder Renlund offered a blessing upon the Congolese people that they may be provided for in their needs and that there may be peace in the country. He also blessed the members to be made strong despite their challenges.

Elder Renlund’s fellow Apostle Elder Ronald A. Rasband visited with thousands of Latter-day Saints in Lubumbashi in 2017. People squeezed into the stake center and adjoining tents to listen to Elder Rasband and other visiting Brethren.

“The people were so hungry to hear the words of the leaders of the Church and to hear testimonies borne of Jesus Christ,” Elder Rasband told the Church News.

Nineteen stakes and three missions operate in the Democratic Republic of the Congo.