Sister Bonnie Oscarson, a former Young Women General President, center, poses with Shalyn Back, left, and Karlie Guymon, right, after joining them as a guest on the Latter-day Saint Women podcast produced by the Church. Photo courtesy of Shalyn Back.

“Of all of the media we can consume . . . I think having a podcast where women can be inspired by other women, both their experiences and their teachings, is just a great thing to have.” —Karlie Brand Guymon, cohost

As one of the leading historians for The Church of Jesus Christ of Latter-day Saints and as managing historian of women’s history at the Church History Department, Kate Holbrook is an expert on the history of women in the Church. Her work allows her to find, and sometimes unearth, stories about women leaders of the Church from throughout the less-than-200-year history of the Restoration.

In some cases, the stories are well known, but often she comes across stories that haven’t been shared before or perhaps have been lost or forgotten over time. And getting the chance to share such discoveries and insights is one of her favorite things about being a historian.

Take, for example, the journals of Sister Leone O. Jacobs. While working to gather discourses by women leaders throughout Church history for the book At the Pulpit, Holbrook came across a talk by Sister Jacobs, who served on the Relief Society general board in the mid-1900s.

“It was so meaningful,” Holbrook said of getting to pore over Sister Jacobs’s journals and learn about the experiences she had as a wife, mother, and leader in a very different part of the world.

Learning from and connecting with women leaders of the past and the present—even if only through the histories, discourses, or records they leave behind—can be a powerful experience for any member, Holbrook explained.

Their examples “provide visions of beautiful ways to live your life,” she said, adding that “working on At the Pulpit expanded my vision of women’s roles in the Church and all the different ways that they contribute.”

Although as a historian Holbrook understands better than most people just how influential history can be on modern lives, she is also all too aware of the fact that not everyone enjoys sitting down and poring over books and histories the way she does.

So for the people who don’t feel inclined to sit and read, the Church is working to make the histories of women leaders in the Church available through other means. 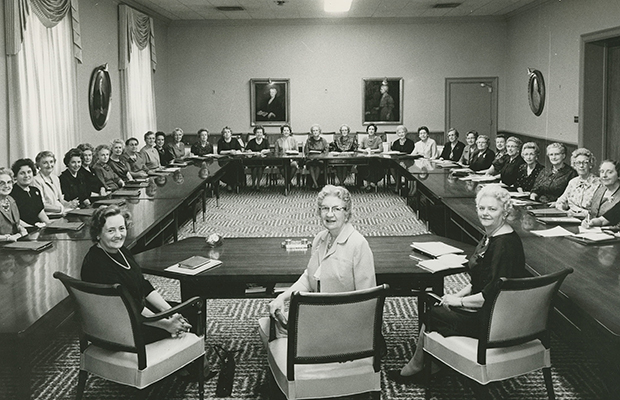 A New Way to Connect with Women of the Past

In early 2019, the Church launched a new podcast called Latter-day Saint Women. At first, the podcast was meant to simply discuss the 54 discourses by women leaders that are included in At the Pulpit. However, after receiving feedback from listeners who were hoping to gain even more knowledge from and about women leaders in the Church, the podcast has evolved into something even better, explained Karlie Brand Guymon and Shalyn Back, cohosts of the podcast.

“The podcast offers another way for women to get at that content and those histories in a way that is more accessible, especially for women on the go,” Guymon said. “Of all of the media we can consume . . . I think having a podcast where women can be inspired by other women, both their experiences and their teachings, is just a great thing to have.”

As one of several guest historians and women leaders to have joined the Latter-day Saint Women podcast for various episodes during its first year of production, Holbrook noted her gratitude for the addition of the podcast.

Books have lives apart from their content when people have conversations about them and are willing to interpret and misinterpret them, Holbrook said. “And the podcast is a good place to experience that life beyond the actual contents of At the Pulpit.”

For its first season, or the first 13 episodes—produced during the first half of 2019—the podcast centered solely around the discourses or content from At the Pulpit.

Recognizing, however, that the content of the book is finite, with only so many chapters to pull from, Back explained that their vision for the podcast shifted with the second season.

“We would love to create a podcast that highlights the contributions of women in The Church of Jesus Christ of Latter-day Saints, especially in various leadership positions and in various locations around the world,” Back said.

“Regardless of whether people are able to read At the Pulpit, they can still join in the podcast for any episode and have some takeaways and be able to feel engaged in a meaningful conversation about gospel principles,” Back said. 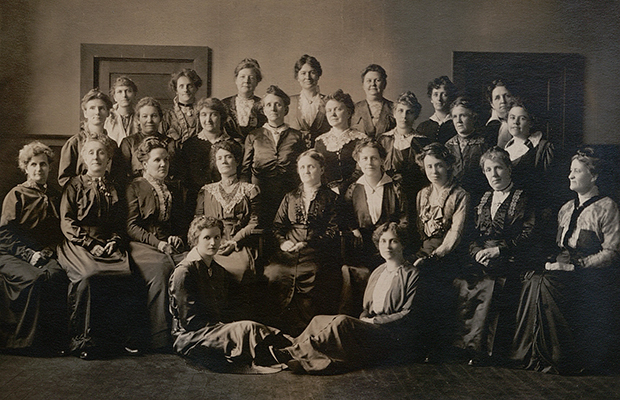 Young Ladies’ Mutual Improvement Association general board, circa 1905. The first YLMIA general board was organized in 1880 under Elmina S. Taylor. The first board members traveled, coordinated the efforts of local associations, corresponded with local units, conducted training, developed curricula and programs, and spoke at MIA June Conferences starting in 1896. Photo courtesy of Church History Library.

Back and Guymon explained that one of the remarkable things about the discourses from the book they have discussed on the podcast is the longevity and continued relevance of their messages.

“Whether it was 15 to 20 years ago or even 50 to 100 years ago [that a talk was given], it’s almost like it had been given yesterday or at the most recent general conference,” Guymon said. “They’re just so timely and relevant, and there really are profound messages and takeaways that the women of today can draw from the messages.”

In addition to the messages themselves, the guests on the podcast, particularly the historians, are able to add valuable historical context to the topics discussed.

For example, from her time studying women’s history, Holbrook said one thing she has learned is that “there are times when women have had more autonomy than others, and that fluctuates. But a constant has been that leaders and members of the Church have always been ready to be engaged in a good cause.”

Women throughout Church history are innovative and dedicated problem solvers, Holbrook said. And for women in the Church now, it is important to know that “you are part of a long tradition of women looking for space where they could improve something and finding concrete ways to do that.”

Throughout history, many of the solutions and innovations created by women have become a part of the fabric of the Church, Holbrook said.

Another thing Holbrook has learned through her work as a historian is the importance of record keeping for both men and women.

Finding fully written discourses by women—particularly from the early years of the Church—that could be included in At the Pulpit was difficult, Holbrook noted. Finding discourses by women from outside of the United States or that had been given in an international context was even more difficult.

“That is one thing we hope will be much better going forward, is that more members of the Church outside of the United States will keep records of the things they’re doing in Church and keep records of their speeches,” she said. Hopefully the existence of a book like At the Pulpit will encourage more people “to keep copies of the talks they give and make notes in their journals or however they want to do it.”

Historically, and to an extent still today, men’s letters and talks have been better recorded because, on some level, they have been thought of as more important or authoritative, Holbrook said. But as a historian, she hopes to dispel that notion.

Her hope is that both the book and the podcast will help women around the world to see that their words and experiences matter and should be recorded and preserved.

People in the Church today, particularly women, are hungry for “the words and the insights and experiences from women of faith,” Guymon explained, citing some of the feedback they have received from listeners of the podcast.

That’s part of why the podcast is important, Back added.

“It can be something that can connect all of us as women and help us feel like our contributions are valued and that they are making a difference and that we’re not alone,” she said. “Women have been so instrumental in teaching and sharing the gospel, and this has been such an incredible way to highlight that.”

Despite living in different times and different situations, women throughout Church history have encountered many of the same difficulties and feelings that contemporary women have, Back said, and understanding that is inspiring.

She added that, through their discourses and histories, women are sharing ways to truly live Christ-centered lives, and their examples can be used to motivate and inspire the future generations. 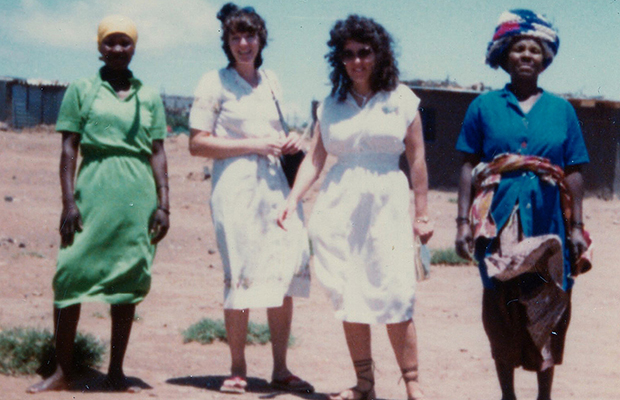 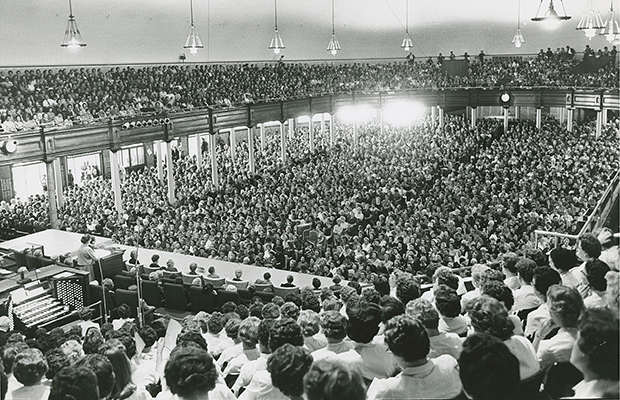 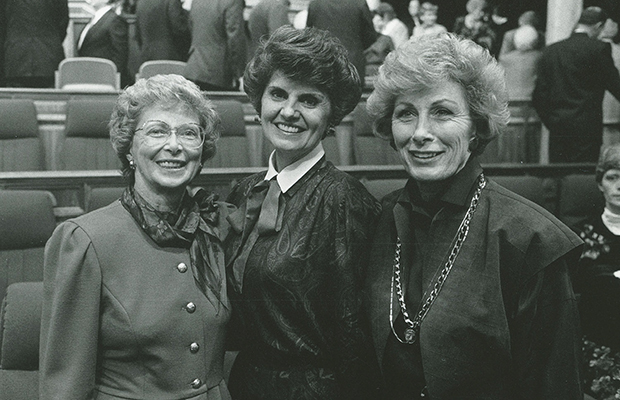 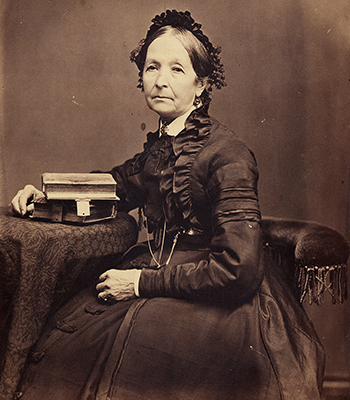 Eliza R. Snow, circa 1875. Snow was a poet, a world traveler, and a renowned leader of Latter-day Saint women. She effectively linked the Nauvoo Relief Society to the resurgence of the organization in the Utah Territory by preserving the Nauvoo Relief Society minute book and traveling throughout settlements to help organize women and encourage them to speak. Photo by Charles Carter. Photo courtesy of the Church History Library. 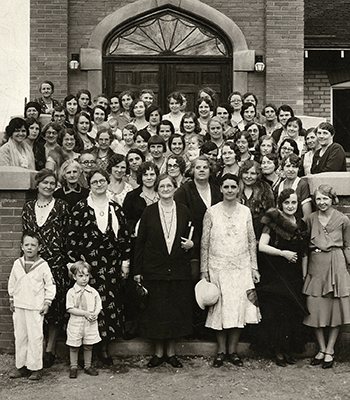 Sister Amy Brown Lyman at social service training in Anaconda, Montana, circa 1920. Lyman, bespectacled in the center of the front row, became a trained social worker after formative visits to Hull House in Chicago and was a leader in implementing social service work within the Relief Society. Sister Lyman served on the Relief Society general board for 36 years, including her time as president. Photo by Montgomery Studio. Photo courtesy of the Church History Library. 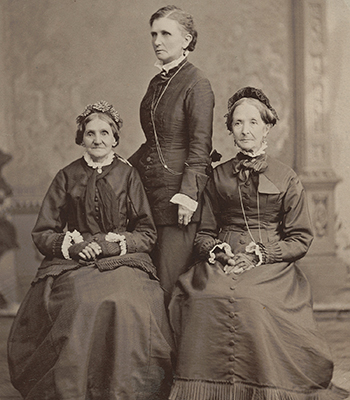 Elizabeth Ann Whitney, Emmeline B. Wells, and Eliza R. Snow, circa 1876. Whitney, left, and Snow, right, were members of the Nauvoo Relief Society and served together when the general board of the Relief Society was organized in 1880. Emmeline B. Wells, center, edited the Woman’s Exponent and worked as the general secretary and then General President of the Relief Society in later years. These three women traveled often to speak to different congregations. Photo by Charles R. Savage. Photo courtesy of the Church History Library.