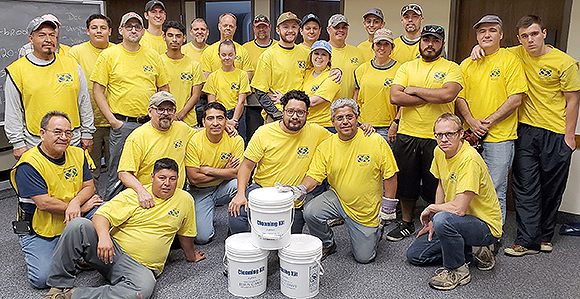 A group of volunteers from the Richmond Texas Stake ready to go to work. Photo by Kelly Foss.

“There is great joy in service. It can be very, very hard work sometimes, but the difference that it can make in the lives of people, all of whom are God’s children, can be of great significance, even life changing.” —Stirling Pack, disaster relief coordinator, Houston, Texas, region

Tropical Storm Imelda, which hit the southeast coast of Texas on September 19, continues to be a source of mystery to local residents in the hardest-hit area, from Winnie to Orange, Texas. To have as much as 40 inches of rain fall in a 24-hour period is unprecedented, but to also have it fall in such a small area surprised most local residents.

Volunteers from The Church of Jesus Christ of Latter-day Saints have massed in the area in the days following the storm with approximately 200 10-man teams of workers to further help victims of the floods clean out their homes in preparation for reconstruction work.

Floodwaters contain all types of contaminants—like sewer runoff, lawn chemicals, and other pollutants. Flood-damaged homes need to have all floor covering and home items damaged from the floods removed and unceremoniously heaped on the curb for city disposal to haul away.

Additionally, Sheetrock wall boards need to be removed several feet above the high-water mark because the water seeps upward in the walls. This is called “mucking and gutting.”

Once floodwaters recede, the remaining debris is removed and the interior of the home is gutted and is then dried and treated with antimold chemicals. Homeowners are then able to live in the house with little risk of mold while waiting for contractors to reconstruct the home’s interior.

Ricky Westbrook, the elders quorum president of the Chambers Branch in Winnie, Texas, was responsible for organizing work crews and sending them to homes that needed help in that area. A local resident, Westbrook acted as liaison between the work crews and the homeowners.

President John Bartlett, first counselor in the stake presidency of the Richmond Texas Stake, one of 20 stakes mobilized to provide assistance to homeowners, said, “The response on the part of the Church volunteers has been incredible; everybody is happy to be here.”

Volunteers from the Richmond stake—which included members from English wards, two Spanish wards, and the Vietnamese branch assigned to their stake—would get up early, make the 100-mile trip, work hard all day, and then go home until the next scheduled shift.

Even after hours and days of hard work, just in this small community alone, there were still more than 250 homes in need of basic mucking and gutting.

Missionaries from the Texas Houston East Mission came to help clean up.

With Imelda, even rural areas were not spared. Fele Hernandez, a long-term resident and member of the Chambers Branch of the Beaumont Texas Stake living in the Hamshire area, experienced enormous amounts of water buildup around her home.

Her neighbor and fellow Church member Elisa Zepeda lost all her home furnishings, now piled in a row on the front of her property. Her three vehicles were also written off because of water damage.

In the city of Beaumont, several isolated neighborhoods had massive flooding. The Cypress Texas Stake was assigned to help people in the area around Fehl-Price Elementary School, which itself was flooded.

The process of cleaning out a flooded home is a massive and exhausting task, and local residents—often overwhelmed by the magnitude of the cleanup—were profoundly grateful for the help the member volunteers offered.

Local resident Ebony Sparks, who had lived in her home all her life, was well aware of the storm and had been watching the weather. At 4:00 a.m. she and her husband, Christopher, could see water rising in the streets but were not alarmed. In just two short hours, water covered the streets and seeped into her home. They barely had time to gather some valuables before they were wading through waist-deep water to higher ground with some neighbors.

Her father, a pastor who was out of town, had been praying all night that somehow help would come to assist them in the overwhelming task of cleaning out their home. Just as they arrived at their home to begin the cleanup work, a yellow-shirted work crew from the Cypress Stake was there waiting for them.

“Though we lost everything,” she said, “we still have to recognize the blessings of what we have. We are so appreciative. We’ll make it through.”

Farther down the street, Martha Chisom and her dog, Penny, had a similar experience. After a kind neighbor called her in the middle of the night to warn her about the flooding, Martha and Penny ended up wading through waist-high floodwaters with their neighbors’ help. They went from a boat to a school bus and finally to a local grocery store where evacuees gathered.

Martha’s newly constructed retirement bungalow had been completed just shortly before the floods came. As a woman of faith, she said the experience caused her to reevaluate her priorities. “I do a little volunteering, but this lets me know I don’t do enough. . . . There’s not a reason that I can’t volunteer more, . . . and I can do that; I can do that well.”

Times of difficulties are when communities come together—when churches, relief agencies, and local governments unite to help those affected. In addition to tens of thousands of service hours, the Church also made other significant contributions of material to help sustain individuals and to provide supplies to other agencies for distribution as they discover those in need.

Stirling Pack, the disaster relief coordinator for the Houston, Texas, region, noted: “There is great joy in service. It can be very, very hard work sometimes, but the difference that it can make in the lives of people, all of whom are God’s children, can be of great significance, even life changing.” 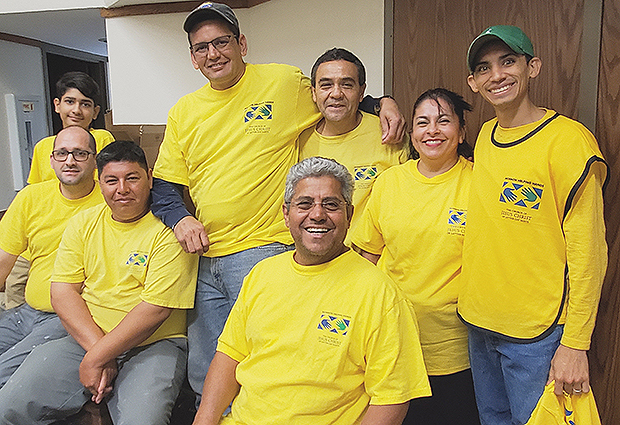 Members of the Houston Fourth and Eighth Spanish Wards don yellow Helping Hands shirts before volunteering to help those in need. Photo by Kelly Foss. 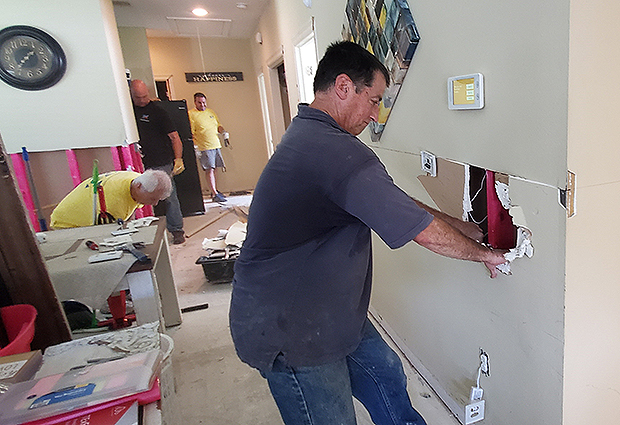 Volunteers pull down damaged Sheetrock wall board to be taken to the curb for removal. Photo by Kelly Foss. 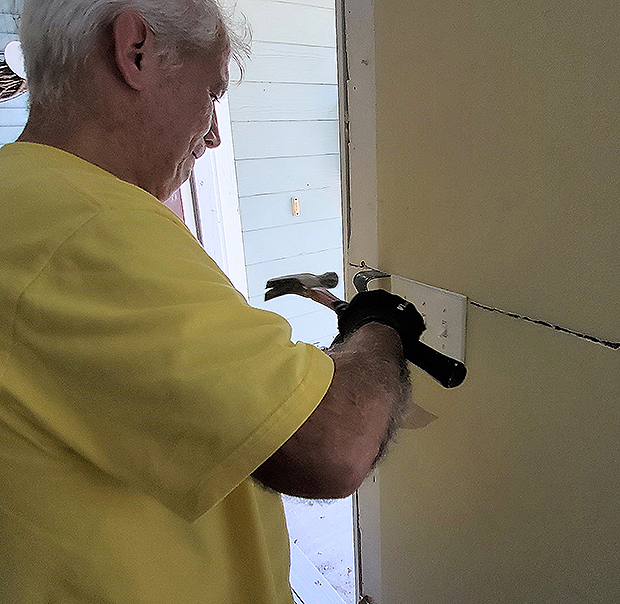 A wall board is cut on a straight line. Everything below the line will be removed and discarded. Photo by Kelly Foss. 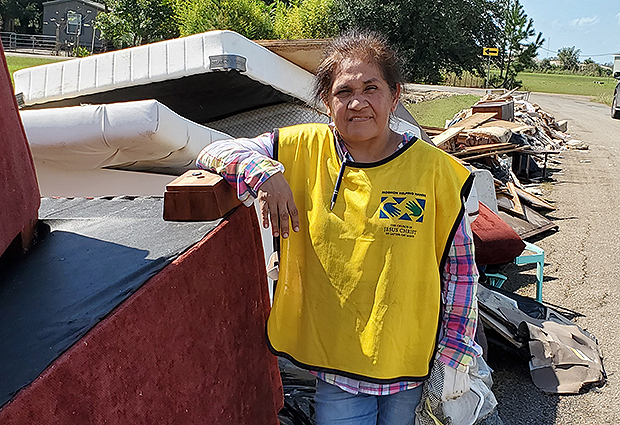 Elisa Zepeda, whose home was flooded, stands in front of the long pile of debris, her soaked home furnishings and interior walls. Photo by Kelly Foss. 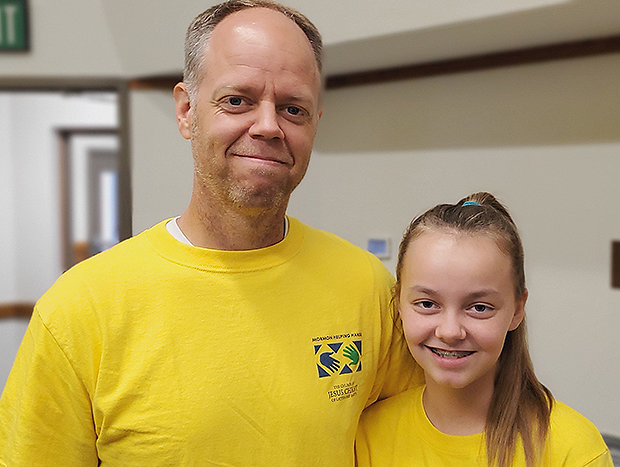 Father and daughter team Jared and Elizabeth Mangum volunteer to serve after the storm. Photo by Kelly Foss. 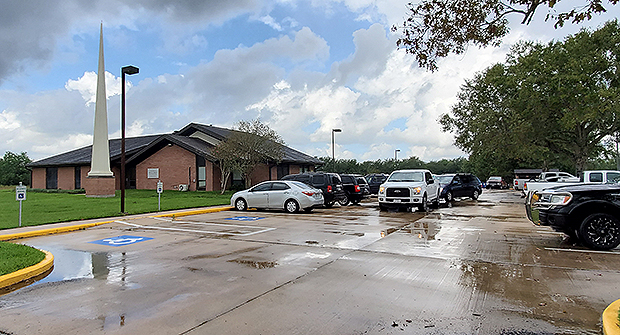 The Chambers Branch chapel in the heavily impacted town of Winnie, Texas. Photo by Kelly Foss. 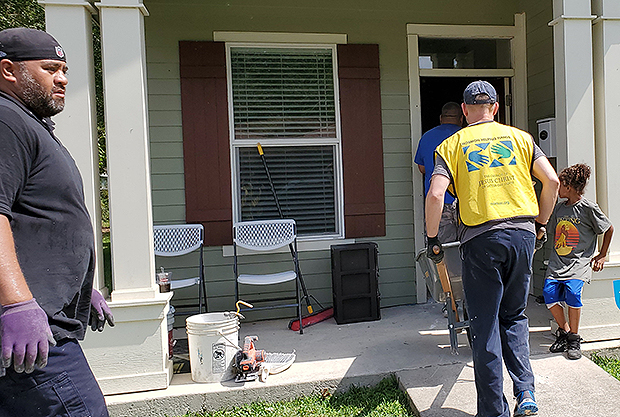 A wheelbarrow with debris is removed from Ebony and Christopher Sparks’s home. Photo by Kelly Foss. 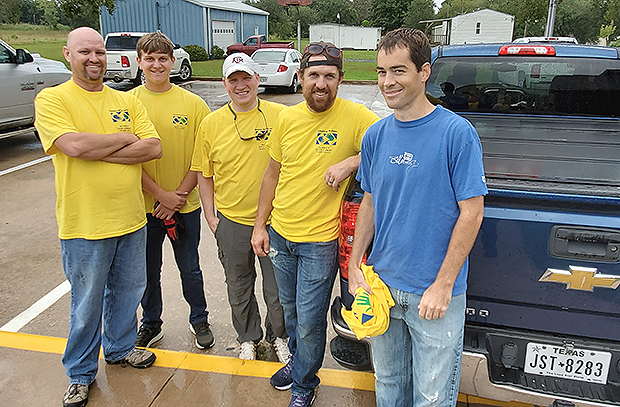 A fresh work crew is ready, willing, and able to help some of the many families in need. Photo by Kelly Foss. 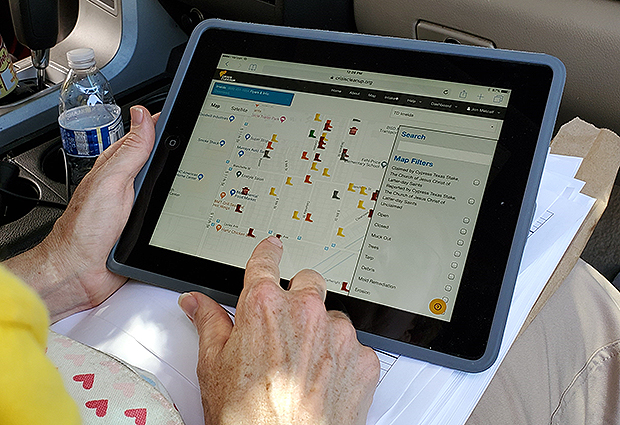 The CrisisCleanup.org program has dramatically improved the efficiency of work crews by making them able to keep track of many jobs in many places being done at the same time. Photo by Kelly Foss. 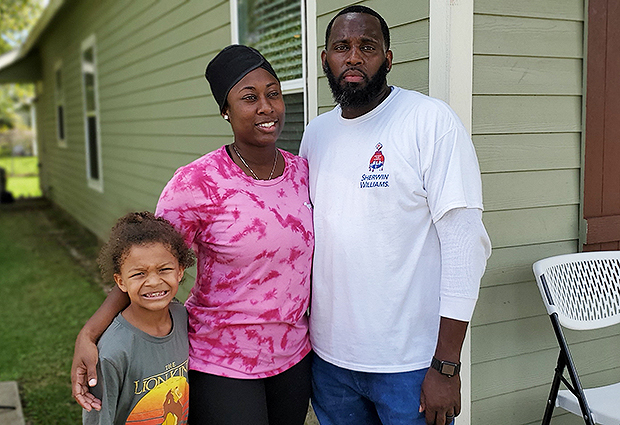 Ebony Sparks and her husband, Christopher, adjust to the harsh reality of a flooded home. Ebony expressed sincere gratitude for the help from Church members. Photo by Kelly Foss.

Interior walls are removed, a necessary part of the process to muck and gut homes after flood damage. Photo by Kelly Foss. 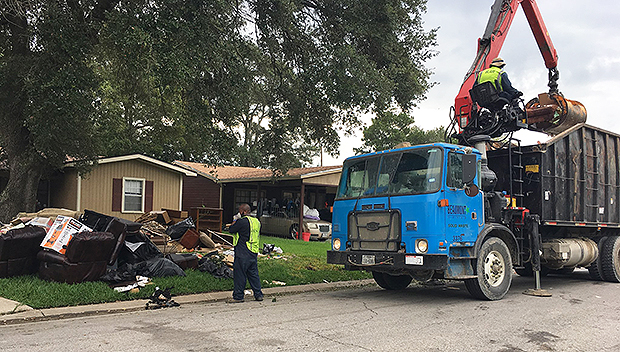 The city of Beaumont will work for weeks to remove the piles of debris taken from flooded homes. Photo by Kelly Foss.