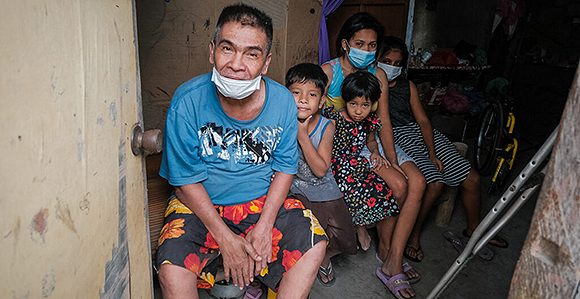 Jorge Alvarez, a member of the Lemery Philippines Branch, sits by with some of his family members by his front door after returning home for the first time in three weeks on February 6, 2020, after having to evacuate following the January 12 eruptions of Taal Volcano.

“The thing that surprised me the most when I asked for members to help was that they were there right away. . . . I’m grateful to be in the middle of it all and seeing them give. That type of ministering can’t be taught.” —President Jon Reyes, Batangas Philippines Stake

Peeking through the door of his small cinder block home, Jorge Alvarez smiled. “I’m very happy to be home,” he said. “But there’s a lot of cleanup to do.”

After spending 25 days in the Batangas Philippines Stake Center—where he sought refuge following the evacuation of his hometown of Lemery, Philippines—Alvarez was excited to be home.

Taal Volcano erupted on January 12, sending a large plume of ash, steam, and rocks miles into the air and impacting 96,061 people—including Alvarez and his family.

Alvarez, who is dependent on a wheelchair or crutches for mobility, returned home from the stake center to a crumbling roof and walls and thick layers of volcanic ash.

“My back aches from sitting in the chair,” Alvarez said, motioning to the wheelchair now pushed against the wall inside his home. But the stake center that served as his family’s evacuation center was much too big for Alvarez to get around comfortably using his crutches. So when the opportunity came to return home, Alvarez jumped at it.

Piling the family onto a borrowed tricycle motorbike in the parking lot of the Batangas stake center on the morning of February 6, Alvarez was among one of the first waves of people to return home to Lemery, on the southwest side of Taal Lake, which surrounds the active volcano.

Although the alert level following the volcanic eruption remains at 3 (on a scale of 5) and thick piles of ash still cover much of the city, Alvarez decided he no longer wanted to wait at the evacuation center.

“We are grateful to our brothers and sisters in Batangas City for ministering to us for three weeks, but it’s time to come home,” Alvarez said.

Over the course of the last three weeks, the Batangas stake center has housed more than 150 evacuees from Lemery and other cities surrounding the shorelines near Taal Volcano.

But for many of the Latter-day Saint evacuees from Lemery, the Batangas chapel was not their first stop. Some members initially took shelter at the Lemery branch building or other more local shelters.

It wasn’t until they spent a fearful night in their small branch chapel, with thick ash falling outside and earthquake tremors occurring every three or four minutes, that they realized they would need to seek shelter and help elsewhere, said President David Arrieta, first counselor in the Lemery branch presidency.

By the following morning, on Monday, January 13, much of the city had already been evacuated. The Latter-day Saints, most of whom did not have cars, were running low on food.

At first President Reyes thought  the members in Lemery just needed supplies, so he organized members with vehicles to drive food into the restricted areas where the ashfall had been heaviest. But as the group surveyed the thick layers of ash still hanging in the air, President Reyes realized that supplies may not be enough.

“That’s when I got really worried,” he said. “I didn’t know the situation was that bad during that time. It’s an image that will stay in my mind forever.”

What was meant to be a supply delivery trip soon became an organized rescue effort. President Reyes called together as many drivers and vehicles as he could from his stake to go into the area and bring people out. That’s also when he decided to turn his stake center into an evacuation center.

Since then the stake center has become a kind of home for those staying there, members and nonmembers alike. The recent visit from Elder Quentin L. Cook to the stake was one such moment that made it feel like home for many.

There are not a lot of good parts to being an evacuee, explained President Arrieta, but seeing the kindness of those around him is definitely a good part. So was the recent visit from Elder Cook, he added.

For Lemery branch president Ronald Dudas, the visit from Elder Cook “felt like a special conference just for evacuees.” And during the time he was there, most people were able to forget their struggles and revel in the spiritual uplift brought by the visit. 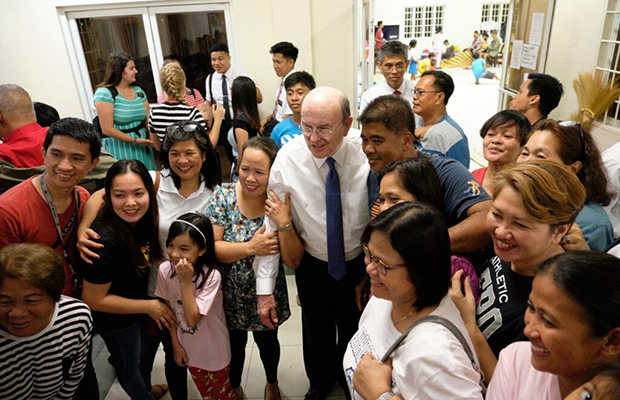 On Sundays, to help accommodate the members of the wards that meet in the chapel, as well as those being housed there, President Reyes said they have switched to holding three sacrament meetings in the stake center—two for the wards that regularly meet there and one for the Lemery branch—and have canceled the other classes.

For President Reyes, turning the stake center into an evacuation center and opening the doors to those in need was “just something we felt we needed to do,” he said. And although most people staying there, much like Alvarez, are eager to return home, they recognize and cherish the blessing it has been.

Even the government officials who visit the stake center to record and update the official number of evacuees housed there have commented on how nice of a place it is to be, noting that it has air conditioning, is kept very clean—despite the great increase in users—and overall has a more welcoming atmosphere, President Reyes explained. One of the key differences between Church-provided shelters and others is the fact that Church shelters are run under priesthood leadership, he said.

Although Church leaders and members are all too familiar with responding to natural disasters in the Philippines, President Reyes said the response to the Taal eruption needed to be different because of the extended high alert and the lockdowns that, until the last few days, have prevented many evacuees from returning to their homes—even just to clean up or collect their animals or belongings.

Although white plumes of steam continue to be visible coming from the Taal and the alert level, for now, remains at 3, those who are eager to return to their homes are slowly starting to make the ash-covered streets surrounding Taal Lake seem less ghostly. Additionally, most of the six stakes hosting evacuees over the last few weeks have been cleared out now—the Batangas and Rosario stakes are the last still hosting evacuees and are expected to clear out at the beginning of next week. 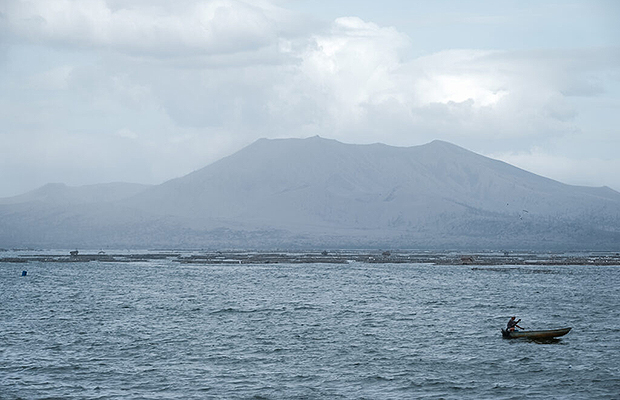 The island where Taal Volcano sits in Taal Lake is visibly covered in dense layers of volcanic ash on February 6, 2020, following volcanic eruptions that occurred on January 12, 2020.

“We’ve never had evacuees stay this long,” President Reyes said, noting that his ongoing worry has been to figure out how to sustain 150 people for three weeks. But the members have more than stepped up to the challenge.

Members from all over have been donating continually, said President Arrieta. “We’re very grateful. They were quick to respond, and they are our brothers and sisters.”

Whether volunteering to drive into the danger zone to rescue people or gathering and donating large amounts of clothing, food, and other supplies, members are continually coming to him and asking how they can help, President Reyes said.

“The thing that surprised me the most when I asked for members to help was that they were there right away,” he said. “I don’t think anyone had second thoughts. I’m grateful to be in the middle of it all and seeing them give. That type of ministering can’t be taught.”

Overall, there was a great outpouring by members in the surrounding areas, said Elder Evan A. Schmutz, General Authority Seventy and Philippines Area President. Now, as members begin returning to their homes and leaving the evacuation centers behind, local leaders will continue their support by assessing the ongoing needs for those most heavily affected.

“With the immediacy of the danger past, now we’re looking at what to expect for some of the longer-term needs there.”

One of the great things about the Philippines Area, Elder Schmutz added, is that because the area and members are so mature in the gospel and the various ways the Church operates, local leaders are able to assess needs and respond with confidence and the strength of many dedicated members to help them—both in response and recovery to such events. 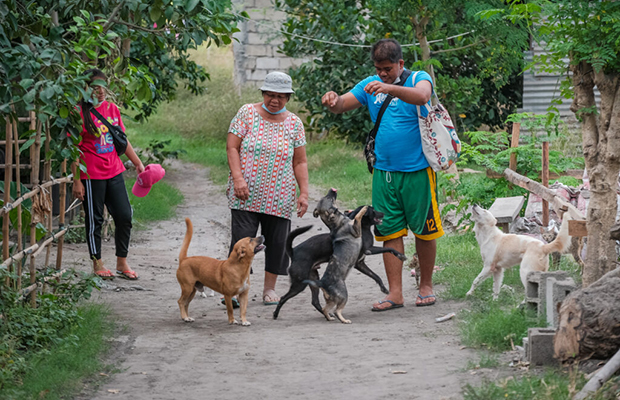 Evacuees from the Lemery branch near Taal Volcano return to their neighborhood in Lemery, Philippines, on Thursday, February 6, 2020. 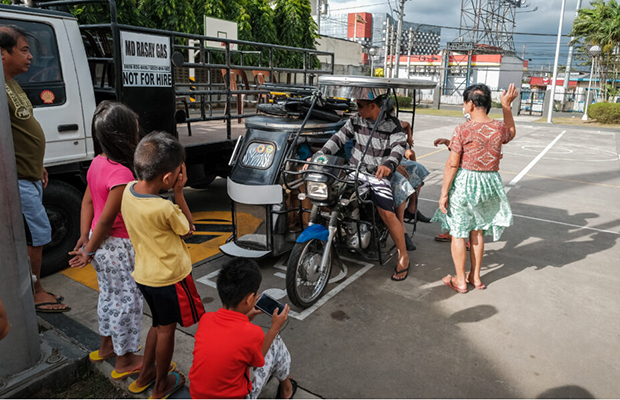 Evacuees from the Lemery branch sit in a tricycle motorbike in the parking lot of the Batangas Philippines Stake Center on February 6, 2020. 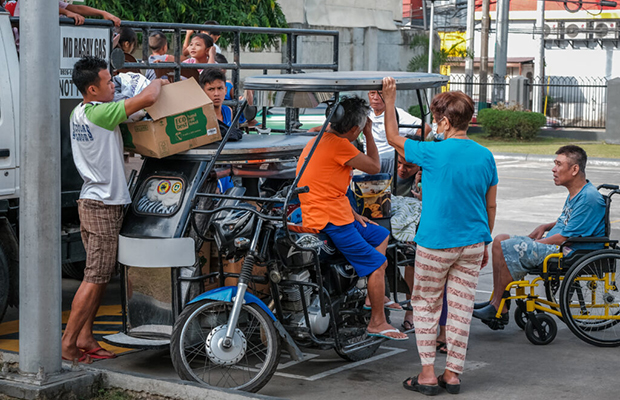 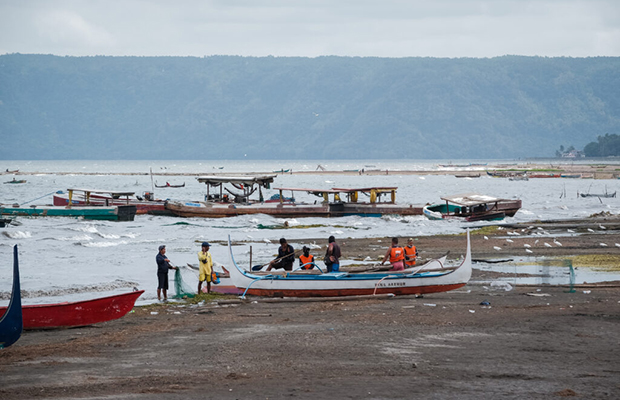 Evacuees from the surrounding areas of Taal Volcano return to the shores of Taal Lake to clean up on Thursday, February 6, 2020, after being restricted from the area for nearly three weeks following volcanic eruptions. 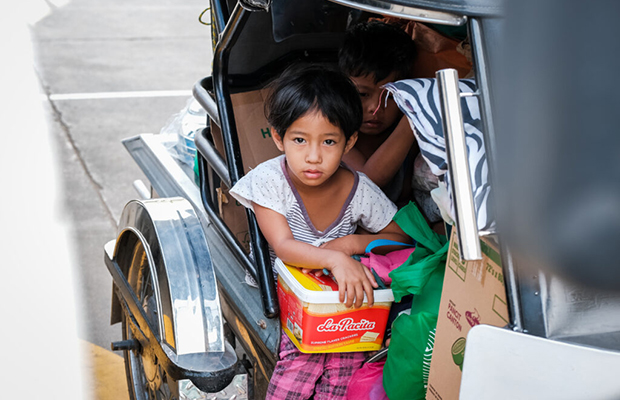 Evacuees from the Lemery branch sit in a tricylce motorbike in the parking lot of the Batangas Philippines Stake Center on February 6, 2020. 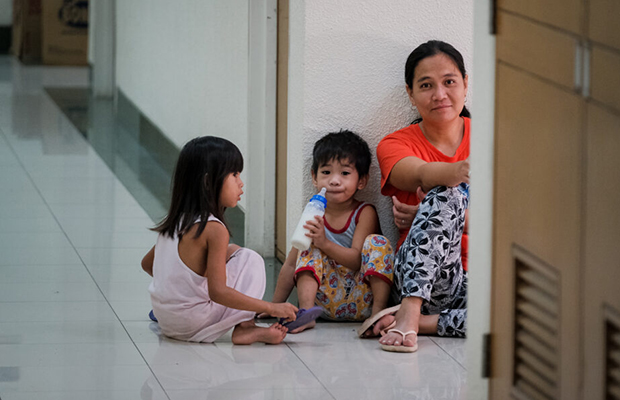 Evacuees from Lemery City and other areas surrounding Taal Lake continue to take refuge in the Batangas Philippines Stake Center on February 6, 2020. 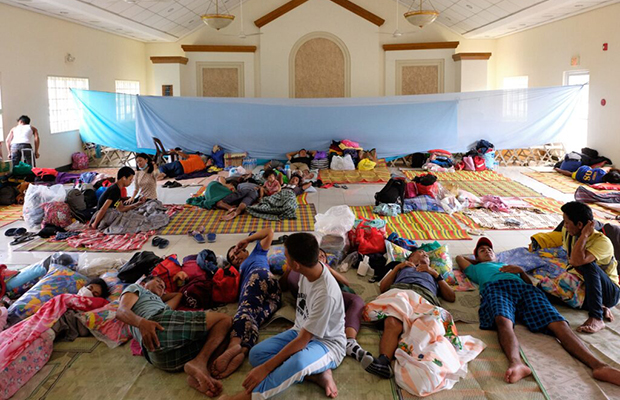 Latter-day Saints gather at a local meetinghouse as Taal Volcano continues to spew ash south of Manila, Philippines, on January 12, 2020. 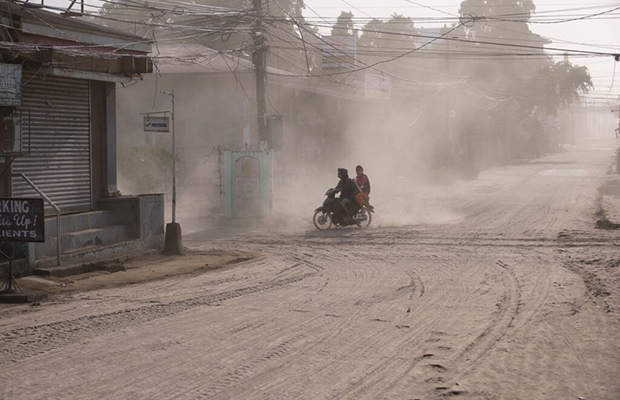 Taal Volcano continues to spew ash south of Manila, Philippines. Red-hot lava gushed out of the Philippine volcano after a sudden eruption of ash and steam that forced villagers to flee en masse and shut down Manila’s international airport, offices, and schools.