“Ringo walks up to me and gives me a hug. He looks me right in the eye and asks me how I’m doing. He connected with me. I’m standing in front of arguably one of the most famous people in the history of the world … and he made me feel important.”

“The true measure of a person is how they treat people who can do nothing for them,” he said. “And at that moment, Ringo made me feel like I mattered.”

Now fast-forward to an unexpected email he received just a few days ago from a woman who works as a distributor for USANA, a nutritional supplement company. Guest is the organization’s chief executive officer.

The woman, who is not a Latter-day Saint, wrote that she has observed Guest from a distance and appreciates his integrity, faith, leadership, and example.

“I’ve never met you in person,” the email said, “but I admire you and want to thank you.”

Once again, Guest experienced a moment of insight: You are always being watched—and you will make a difference in another’s life, for good or ill.

The silver-haired Guest could aptly be called a Latter-day Saint Renaissance man.

Besides overseeing a worldwide health and wellness corporation, he has performed on his bass guitar at the Grand Ole Opry; been interviewed on Chinese television to a viewing audience of tens of millions; backed up several of his music heroes, including Eddie Money and Styx’s Tommy Shaw; interviewed rockers like Gene Simmons from Kiss; held the Hope Diamond in his palm; and shared with Dr. Oz his gospel-rooted beliefs on living a life in harmony.

He is also a husband (to wife, Lori), a father of four, a grandpa, a returned missionary (Netherlands), a proud BYU graduate, a former bishop, and a frequent templegoer.

Not bad for a drum-banging kid from Kalispell, Montana.

Guest’s vast travels and experiences allow him to interact with legions. A few, like Ringo or Dr. Oz, are celebrities. Most are regular folks. Many of the people he meets are happy. Others are unfulfilled and lost.

But at each concert or board meeting or Church gathering, Guest remains an eager observer and learner. Ever watchful, he’s gained clarity on what defines success.

And, like a guitarist who searches unceasingly for that perfect sound, Guest seeks day-to-day harmony in a life fueled by gospel principles.

Being a Latter-day Saint Brings Joy

Guest has never been coy about his Church membership.

Visit his office and you’ll find a framed guitar signed by each of the Eagles band members just a few steps from sculptures of young Joseph Smith studying the Bible and the Prophet Joseph sitting atop a horse alongside his brother Hyrum.

His identity doesn’t shift for his audience.

“I can’t think of one time in my life—whether I’ve been backstage with one of the biggest rock bands in the world or in Washington, D.C., presenting to a member of Congress—where it’s been a liability for me to represent that I’m a man of faith.”

“Kevin has an amazing love for the gospel and can communicate that to the people around him,” said his priesthood leader, Bishop Scott Newman of the Harvest Park 2nd Ward, Riverton Utah Harvest Park Stake.

Guest is quick to add he’s not a perfect man. He’s made mistakes. He has challenges.

“But I do believe that I have repented and utilized the Atonement [of Jesus Christ]. I’m in a position where I have been forgiven and learned from my mistakes.” 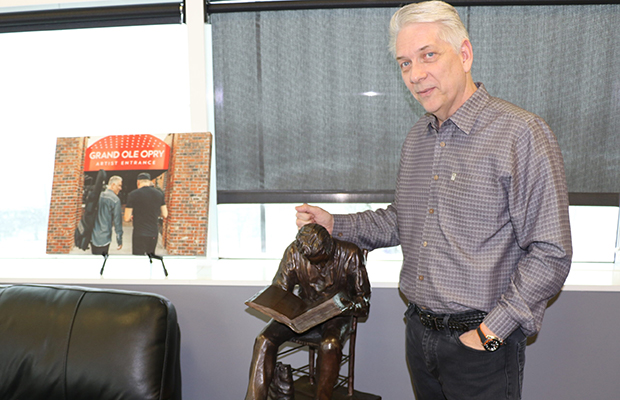 USANA CEO Kevin Guest’s office includes a photo commemorating his performance at the Grand Ole Opry and a sculpture of young Joseph Smith seeking wisdom in the scriptures. Photo courtesy of Jason Swensen.

Living a Life in Harmony

Ever the musician, Guest utilizes music principles to teach life lessons that serve him well in business and in his Church and family duties.

One’s basic identity as son or daughter of God is augmented by several other identities: father, mother, musician, businessman, athlete, Latter-day Saint. Added to all those identities are core values that dictate decisions.

“Once we’re clear on those values, then the decision-making process becomes easier. We can execute them. And that execution can bring about a harmonious life because all of us have the light of Christ.”

Guest said he tries to make sure his decisions are informed by prayer, his “foundational pivot point.”

“Failing forward is part of the plan of salvation because we are here to learn and grow through faith and experience,” he said. “Failing forward means learning from those mistakes and bad decisions that we’ve made, versus repeating them and heading down the wrong road.”

Guest is at ease talking and writing about his own battles with anxiety and the importance of caring for one’s mental health. Despite his successes, he still experiences bouts of “negative self-talk.”

“I’m working on increasing my faith and focusing more on my faith and on the Savior and our Heavenly Father versus focusing on the problems or issues at hand.” 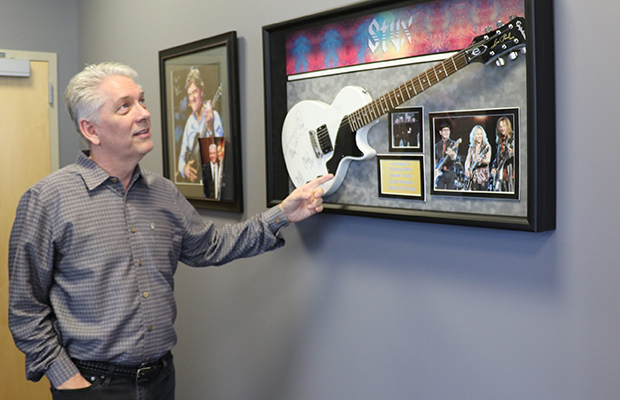 Guest marvels at the paths his life has followed. It’s not one he would have predicted as a little boy when he showed up for his first piano lesson and opted instead to pound on a nearby set of drums.

“But I’m a firm believer that it’s not about me. The Lord has a plan, and it’s my job to fulfill my place in that plan wherever He wants me to serve.”

Personal relationships can be miracles of eternal worth. Guest is grateful for hardworking, devoted parents, Francis and Venus Guest, who were quiet examples of harmonious living. His 30-plus-year marriage to his wife, Lori, anchors him through the often volatile life of a businessman and musician.

Bishop Newman remembers the personal connections Guest made with the priests in the ward when Guest recently served as a quorum adviser.

“He’s great in the way that he ministers to the people around him,” said the bishop.

When Guest spoke to the Church News, he had just returned to Utah from Asia. He was traveling the next day to Korea. But no matter where he greets each new day, he chooses to be believing, faithful, and hopeful.

“It is because of my spiritual beliefs I do much of what I do. I am able to survive difficult times knowing that if I do my part, things will ultimately work out for the better.” 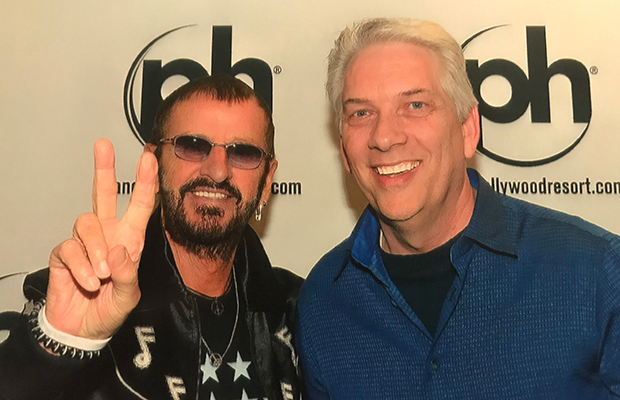 Kevin Guest was uplifted by the kindness shown to him by his drumming idol, Ringo Starr from the Beatles. Photo courtesy of Kevin Guest.